I asked if i could post this image of Derek’s experimental work in CAD and if he would write something about the image/process….here it is…….

“It is my normal practice to use Solidworks CAD software to design within fairly rigid linear, non-flowing but functional lines because they are easier to make on CNC machines. (Easy equals cheaper). However, there are many tools within Solidworks that can be used to create more fluid and, dare I say it, more artistic shapes which, with the availability of direct digital manufacturing techniques, are not at all difficult to make. With Nicola here at Hethel I thought I would try making my own no-pointed part – it has no point as in purpose and it has no point as in either a beginning or end”. 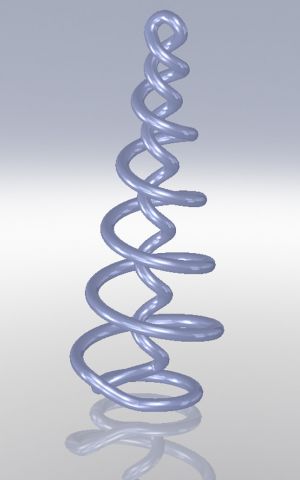 I have reading about architecture and in particular Gillian Darley’s book Factory. In chapter 6 she discusses Factory as Sales Tool ….”The Factory is its own most effective shop window, conveying an image of modernity or tradition as required” (1)

Although it’s clear Hethel is not a factory it does contain the type of research and development that once was housed within a company’s factory buildings. The need for a company to have its own factory has greatly diminished, as globalisation and digital file sharing make it easy to work with the the most appropriate manufacture where ever they are in the world.

Over a number of years I was very fortunate to work with artist Richard Layzell ( http://www.rescen.net/Richard_Layzell/r_layzell.html) as a mentor. Many of our conversations were focused around professional practice and my wanting to do an industry based residency. He has significant experience of working with industry and so helped me to develop this project. Last year Richard was in China undertaking a Visiting Arts project and I asked him to buy me up a packet of ordinary sewing needles. The packet was purchased from a market in Shanghai and its interesting to see the industrial landscape represented on the packaging. 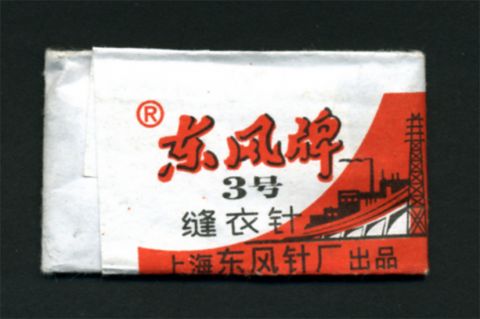 In a recent post (#17) I was considering what I though engineering looked like (before I had seen Hethel). I spent a morning last week at Scion Sprays http://www.scion-sprays.co.uk/ the first tenants at Hethel) where they kindly agreed to let me photograph their workshops. It didn’t look like the Eminox workshop (see post #17) I had seen years back or the images in the film Saturday Night and Sunday Morning, and that’s because Hethel is a research and development environment and not a large scale production facility / factory. There is an obvious delineation between research & development and production but one I hadn’t until now considered fully enough. Within art practice, research and development often occurs in the same space as the making or manufacture of the work, unless the objects are made by someone else that is. So with the workshops at Scion Sprays, the photographs reflect a development environment, set up for the production of prototypes and extensive testing.

Jeff, the lead engineer showed me round, answering my questions about what things were called and what they did. It’s difficult to follow very complicated engineering processes (or even very basic ones sometimes) but I try to link what is being said onto my own knowledge and experiences as an end user of engineered products. I’m learning new things all the time – I didn’t know that petrol has different properties in summer and winter and imagine many people who buy petrol didn’t know that either.

We talked about the integration of digital technologies and how some of the traditional aesthetics of engineering have been lost, like blueprints for example through the use of digital processes. I’m booked on a blueprinting day next week so I can explore the process for myself. We also talked about the de-skilling of engineering through the abandonment of apprenticeships and Derek and I spoke previously about how the role of the digital is changing the skills required within the discipline.

There is a view of engineering that remains linked to the heavy industries of the industrial revolution and no doubt when the layman considers engineering Isambard Kingdom Brunel, a civil engineer responsible for bridges, dockyards and railways comes to mind. The imaginings of large structures constructed in iron works is far removed from what can be seen at Hethel. This is a different type of engineering with this workshop containing computers, spray benches, a clean room and lab coats in addition to the expected lathes and mills (that’s a type of drill to you and I). Just as in art practice the overarching engineering term covers a great range of interests, skills and approaches.

I asked Jeff if engineers work within the parameters of what can be manufactured and yes some engineers do work like that (engineering for manufacturing so to speak) but there is also the blue sky engineer of which Jeff is one.

There was talk of art classes for engineers which needs to be explored further and they have invited me beck to photograph their manufacturing processes once they go into production next year which is great.