A couple of years ago I undertook a period of professional development myself. It’s always good to stop and look at what you’re doing and think about where you want to go next. It was a very valuable experience and as part of that I got some mentoring time from some of the most experienced professionals in the field of large scale installations. One of the biggest things I learnt from them was the importance of testing everything at full scale before the install. I kind of knew that but it was good to hear it from people who have been doing this far longer than me. Since then I’ve tried to ensure that full-sized testing is part of the process of creating new works.

The PaperBridges I built a couple of years ago, were the product of years of building prototypes at ever increasing scales and creating the necessary angles in sections of full sized sheets. I built a paper bridge in China for a 3.5 tonne RangeRover to drive over, but long before it was built, we drove the exact same model of car over life-sized plywood arcs to check the clearances and how it looked for proportions. Last year’s ‘Waterfall’ protection installation was tested life-sized in a warehouse first before a whole night’s test projection on site to iron out all the technical problems with working in remote fields.

None of that happened in the library last week. Against everything I’ve been working towards for years, last week’s mini-residency in the City Library was a whole different beast.

Part of the challenge of the residency was to produce a body of work on site in just four days. Part of my brain was saying “that’s crazy! You can’t do it.”, while the other side was secretly liking the challenge and the risk. Risk is good – it’s what keeps life exciting.

I wasn’t completely unprepared. Obviously I’d done a life-sized test already in the library, so I knew how the pieces needed to behave. I’ve also done a number of inflatable installations in various locations over the past year, so I had a pretty good idea how to construct them. I’d done a couple of recce’s around the building so I knew which areas I wanted to work in. I had plans of all the floors in the building and had read vast amounts about the construction and history of the architecture. At least I’d done my homework.

However, on the day I was still faced with the reality of designing, fabricating, installing and photographing a new construction every day for the week. Regardless of the homework, that’s still a daunting task. The sensible thing would have been to build the inflatable forms in my studio first. But part of the reason for the residency was to be transparent about the process, so I felt it was important to show the whole process for anyone that wanted to see it.

Each day I knew where I wanted to photograph in the evening, but no more than that.  So each day  started with revisiting the location, measuring up the negative spaces I wanted to fill, checking the angles of view for the images and locating where the power points were for the lights and fan.

I then sketched out the form in my notebook and calculated the dimensions and construction method. 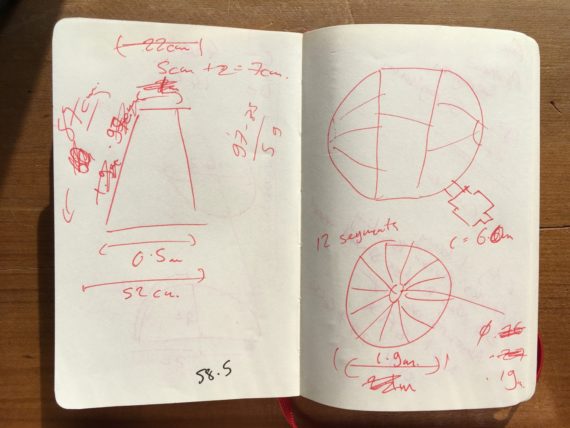 Patterns for the end sections were drawn onto large sheets of paper and plotted onto the fabric for cutting out. Sewing the panels, while one of the easier tasks, was by far the longest part of the process. On the final day, the 7.5m long straight panels was a time and motion event in itself. Each seam took 20 minutes of sewing time – that’s just how long it physically takes to feed it through the sewing machine. There were five panels in the main body making 1hr 40 mins of sewing time. Each end had a circumference of around 7.5m too, so another 40 mins of sewing for those. Each end panel was made from 13 smaller panels which took around 1hour of sewing. Already we’re up to nearly 4.5 hours of sewing. Thats before the zips and sleeve for the blower fan. Add on to that the time it takes between each sewn panel to find the next piece, line it up, wind new bobbins, and generally battle with the sheer volume of fabric and even these simple constructions take the best part of the day to just sew together.

Despite having already done a full test for the first nights shoot, we still had a number of issues with it. The battery powered LED lights turned out to be more hassle than the original mains powered lights. The colour temperature of them was also far colder, to the point that it became impossible to compensate for it in post production with the fill lights I used were significantly warmer. An additional and unexpected problem with security and emergency lighting levels became another challenge to the vision. The revised shape to the ends became far more pointed once inflated than I had anticipated and I wasn’t entirely convinced they worked with the architecture the way I wanted. The light and shape issues also compounded to the photo shoots taking far longer than expected and a late night for everyone. 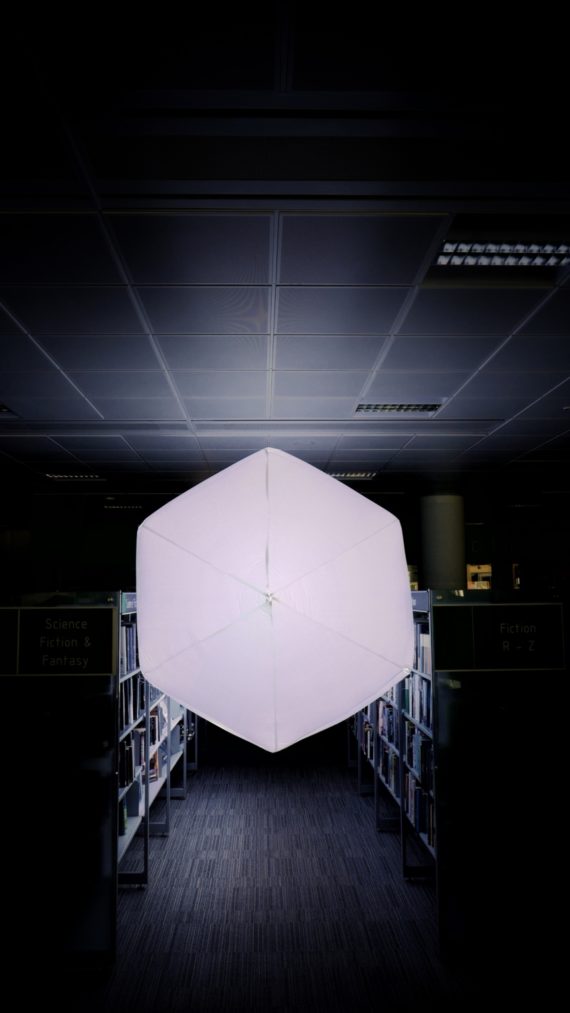 Still, the benefit of making pieces from scratch each day meant that I could take on board those issues from the first night and make adjustments to the subsequent pieces. The inflatable built on the second day worked much better overall. We also decided to ditch the idea of trying to do two locations each evening and instead concentrate on getting a couple of different shots from the same location. 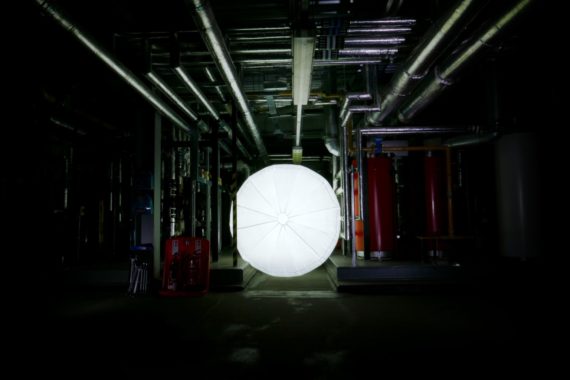 At the start there was every intention to create a body of images in a week. The time restraint and the pace of work required to achieve that was very much part of the project. But as I got into the project, it’s taken on a life of its own – my thoughts and approach to the project have evolved. As I start to contemplate the images as content for the final publication the more I want to expand the series and up the production values.

Next steps are revising the first inflatable and reshooting the first night’s images. This will probably extend to a number of new locations within the library building and maybe a final new inflatable for a couple of them. 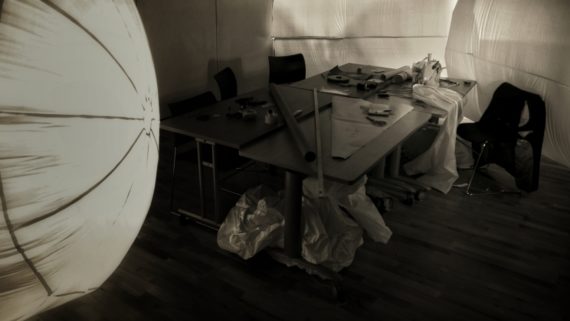