Press days. They always seem like a great idea when you agree to them. They’re frequently a great idea afterwards too. The reality of them are that they can be the most stressful bit of any project.

If you think private views are a bit of a hectic deadline – there’s always wet paint on the opening night somewhere – press days are often before then. A sort of not-quite finished time when you’ve got to sow the illusion that everything is how it will be on the opening night even when it clearly isn’t. And just when you think the artwork you’ve been slaving over for months is the star of the show, they always seem to want an unhealthy amount of images of you as the artist instead.

Of course, that’s what it feels like but in many respects it’s an absolute necessity. I’m quite sure if I didn’t get any press for my projects then I wouldn’t be where I am.

Firstly it gets the word out about what I’ve done. Mass media – newspapers, radio and TV are very powerful conduits. They reach vast numbers of people. Local newspapers are particularly useful for getting people locally to know what’s happening on their doorstep.  Local papers tend to be widely read in any area and reach a wider demographic than national newspapers often. As well as local papers where I’m working, I keep a good relationship with my own local paper where I live. It’s really good for building up a profile locally which is always good for letting my neighbours know what I do. Local press and local radio are the main drivers for getting people out to see what I do I find. There’s nothing elitist about local press so it becomes a great leveller and brings people out who might not normally be interested in contemporary art.

Secondly, media coverage builds profile. Most of the people who see or read about my work in newspapers or on the local news don’t actually see my work in real life, but over time some get to know what I do and build up a picture of my practise. It still amazes me (somewhat naively) that people I’ve never met seem to know what I do. Only the other week in the library a woman came in to see me somewhat starstruck. Her daughter’s class at primary school had done a whole project on my work and done some of their own outdoor pieces and she couldn’t believe I was actually in her library! OK, so things like that weird me out a bit. I had no idea that kind of thing goes on or why the school should be studying me of all people, but I took the compliment. 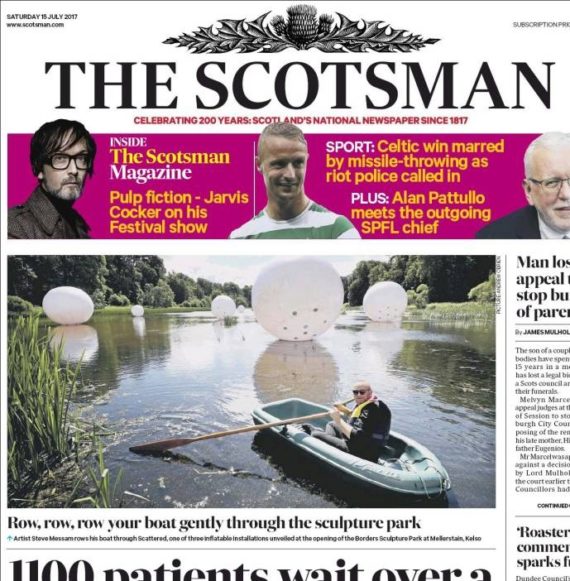 Profile is good. It’s what gets me work. Social media helps with it too. I’ve had a number of sizeable commissions as a direct result of being on Twitter. Interesting to note I’ve not had anything off Facebook yet, but that’s either down to me not spending much time with it, or their seemingly random feed algorithms.

Finally, media profile has value. With all media coverage, it’s not just me benefitting. It’s equally, or sometimes more so, doing exactly the same for my client – the event, or the organisation commissioning me in the first place. Sometimes the media coverage alone is the end product for some commercial clients. Editorial coverage in publications is far more effective at raising the profile of an organisation than placing an advert. In PR terms there is a real monetary value to this. You can take the column inches of any press or seconds of airtime in broadcast media, and determine a value based on how much it would cost for an equivalent sized advert. This is known as Advertising Equivalent Value (AEV) and for the hard nosed bean counters who let you loose with their money is currency and a return on investment.

Back in 2015 I built ‘PaperBridge’ for Cumbria Tourism as part of a wider scheme to engage art with tourism across the UK. We had no marketing budget for it specifically and in fact only one A4 poster ever got put up anywhere for it. Its success was entirely through local media contacts, which in turn got picked up nationally, then internationally as the piece went viral. Within a month images of the piece alone clocked up an AEV for Cumbria Tourism, and James Cropper, the paper manufacturer, in excess of £200,000. It hasn’t stopped since then and conservatively it’s now worth a good half a million.

On top of this, the project led directly to me building an even bigger one in China for LandRover. As projects go, it certainly wasn’t a cheap thing to do, but the client knew the cost of a 90 second advert on YouTube and given the international press coverage it got along with online views, as far as they were concerned it was great value for money. For me, I got to build one of the most beautiful bits of paper architecture and submerge myself in creating an artwork for a few months.

So, a meeting was had and the City Council press officer thought my residency at the library might make a good story for the local press and was I interested?

Part of my mini residency in the library was to explore to potential of the library and artists for mutual benefit. In this respect it would be great to show how the library was engaging with an artist in a new way. It’s another layer to the narrative of what the library does beyond lending books. So I worked closely with the council press team to create a photo opportunity to sell the story. It was also important that the story put out in the press release was more than just me making big things in the building and led into the wider ‘Big Books’ project.

As always, the photo shoot was up to the wire with still sewing in zips when the photographers arrived. But still, we managed to inflate an 8 metre high form in the front of the building and lit it up so it could be seen down the length of New Bridge Street. At three metres in diameter, the piece was large enough to stand inside and the photographers took no time in getting some photos of me inside the piece. The obligatory artist portrait shot.

It was always going to be a picture-led story, so thankfully both photographers went away with a bunch of strong images. The Journal featured it on page three of the Monday’s paper with mostly the press release as the story. For the Chronicle article, the extra lead time for them enabled a writer to be assigned and their story ran over two pages. While the story itself may not be that ground breaking or newsworthy on its own, it still added editorial interest to the publications and helped show the library in a different light to a local audience. The press release also gave an opportunity for Arts CouncilEngland to highlight the role they have with libraries, and in doing so created a new line of communication between the project and its major funder.

My project here continues to take shape. I now have a direction for the rest of the images and today I’ve started thinking ahead to not only the full content of the final book, but also page dimensions, paper stock, printing method and binding. So much more to do.