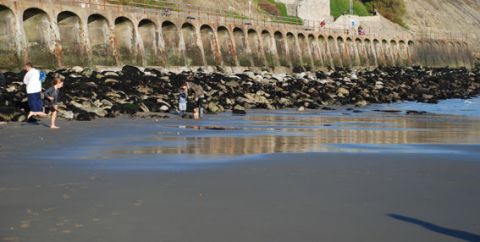 I find myself returning to a dream that I had many years ago, whose meaning escapes me, but which was so ‘pure’ that perhaps it’s now time to excavate it a little.

In the dream I see a flat beach with flat, clear waves running in and receding. And then there is one wave that rises to a perfect peak, curls, and crystallises.

This is the last post for Drawing in Four Dimensions, as I look forward to a new year, and picking my way along a new path of ideas.

My ongoing project One Hundred Years of Industrialised Warfare began with Yesterday, Today, Tomorrow, for the Trouble & Strife exhibition at the Beaney Museum in Cantebury. I hope to be doing some collaborative work with them later in the year.

My work for February is Salient, inspired by reading about the Ypres salient, an area around the city in 1914 that was defended by British troops.

Salient has been uploaded to Vimeo.

My work for March is in progress, and will be recorded in my new blog:

I have been wrestling with a binary problem for ages.

and I curate work

When I worked down on the pier in Margate, curating the harbour gallery, I found that most of my time was taken up with managing, curating,interacting with other artists – my own work proceeded in fits and starts across a background of other activity.

Since I’ve had my studio at home I’ve concentrated on my work ( it still proceeds in fits and starts, but that seems to be the nature of the game)

I miss putting shows together, chasing a train of thought that may be shared by other artists, (or not) bringing the work out into a space shared by non-artists, sharing ideas…

I think what I want to do now is to curate myself: extend my practice so that it becomes an event, rather than a piece or pieces of work. This seems to make sense, the beginnings of the idea are in the digital work I’m showing at the Beaney, and the debate in February.

Have uploaded one of my short films to Vimeo. It was simply made, but in the course of editing I found myself thinking of Mondrian, and his search for truth through line and colour. Given the source of the images for the film, I also found a quote of his very relevant:

‘Precisely for the sake of nature, we avoid its natural appearance’,

Relevant both for my film, and for my artistic practice in general.

So I named ithe film after one of his paintings.

I look forward to making more short films next year, and to more painting, which I’ve neglected, in the run up to Christmas.

I visited Fokestone on Saturday: the town is like the curate’s egg but the harbour and beach are great, and, bathed in that early-lowering autumn sun, were even beautiful.

Best of all I came home with material for new paintings.

Then I got to the stage where I felt frustrated and out of control… that’s when I stop.

Quite a while later I took a look – I had an idea. Did it.

Is it finished? Who knows. It makes me happy the way it is, and it leads me on to the next thing. Why does it make me happy? It feeds a habit, I suppose.