Well, I had a go at a bigger watercolour on stretched tracing paper. It is not easy to build up dark areas of pigment, possibly because the bigger paper holds so much water. 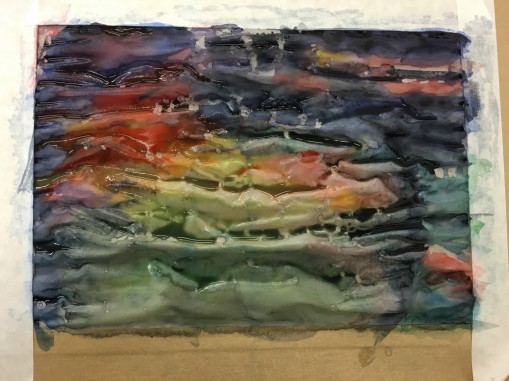 I decide to let the paper dry and then re-work it to add more pigment. I did add masking fluid before I started, and rubbed it off when the paper dried, intending to have very light coloured patches as well as very dark ones.

Good news: the pigment soaks into the paper surface AND the masking fluid does not attach to the paint, so it comes off as I planned – here’s a video:-

Bad news: the paper buckles like crazy while it’s wet, but recovers perfect sleek ripple-freedom once it dries. I did think bigger paper would be more likely to suffer damage. This is disappointing, but might happen after another application of wet pigment.

Meanwhile I’ve taken part in a very interesting group crit, and had more tutorials, so am awash with feedback and stimulation!

Although the way I’ve displayed my work in my space is chaotic, the pieces do convey a sense of multiple narratives, and invoke a positive emotional response in some viewers. These discussions have also given me confidence that I might be working at an idea that is interesting to others.

My tutor Robin Warnes suggested I listen to Brian Eno’s John Peel lecture on BBC Radio 6 (sadly the link is expired). It was fantastic! Eno explains vividly the purpose he believes art serves: “culture as a sort of collective ritual … This huge, fantastic conversation which we call culture… which somehow keeps us coherent” and able to understand life better. This is the core of the experience of group viewings of something as mundane as my collection of ciné films. The traces of excessive viewing or stories edited out that I am investigating are actually records, indices, of different “conversations” over time and space. Eno also calls these events “synchronising”

Another tutor, Sarah Jacques, reminded me of the Scottish artist Douglas Gordon, who has played with found and mirrored images (like my slideshow), but who made one of my favourite pieces at the National Galleries of Scotland’s Modern One. List of Names (Random) 1990-ongoing fills the walls of a big stairwell at this gallery, as if it is significant, but everyday. It looks like a memorial, or roll of honour, but because of its location, you can pass the whole thing, but not see it all together. 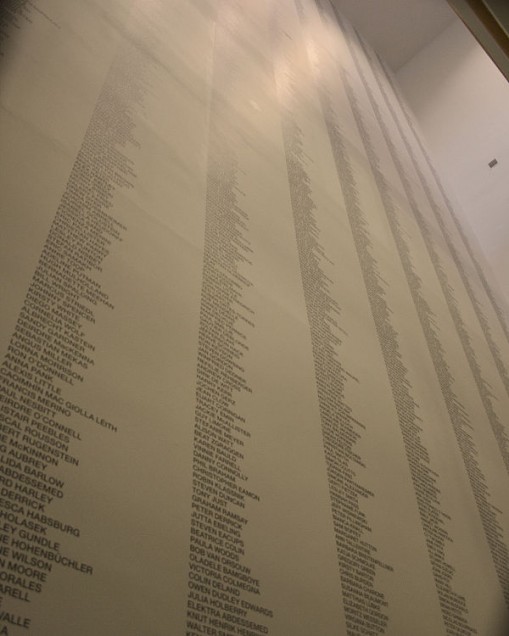 Gordon is quoted by the gallery saying of this work, “It was an accurate and honest statement but it was full of mistakes (like forgetting the names of some friends), so there were some embarrassing elements in the work, but that all seemed to be quite close to the truth of how our head functions anyway. Sometimes it works and sometimes it doesn’t.”

When I look at this piece, I’m almost overwhelmed by both the tide of relationships recorded by the list AND all its omissions and errors, including the people he hasn’t met yet. I love it, and Sarah’s reminder of the artist has taken me back to a work that is dealing with the madness and irresistibility of our brains’ lust to make sense of the random stuff of living. I’m looking at that too by playing with the ‘lost’ and ‘damaged’ ciné films.

I returned to my latest pieces, 15, 16, 17 and 18, rubbed off the masking fluid and assessed what this had done. I was right. The old fluid had bonded with the paper in places, and had not formed a proper barrier. Frames 15 and 16 show this, and are scrappy versions of the original ciné frame 18d as a result. The new fluid masks with a much cleaner edge, so 17 and 18 turn out better than I expected. However both masking fluids on all four of my inked pieces, 15 to 18, have bonded with the thicker areas of ink, which lifts off with the dried fluid as I rub. Gentle rubbing does not help. Keeping control of my paintings of these damaged frames with ink will be difficult if I want to use masking fluid to leave patches of pure light.

Here are my peeled pieces, photographed on a window to emphasise the masking fluid’s effect:

I am losing confidence in ink as a medium for these tracing paper images. I wonder whether watercolour would be less susceptible to coming off around any blobs of masking fluid. It certainly appears to penetrate the paper with pigment in a way that these acrylic inks don’t.

It is tempting to rush in with a watercolour version of these pieces, but I’m worried that this would result in an image that feels like a hasty copy of them, rather than its own response to the original ciné image. Also, the ink pigments are so much brighter – maybe I can make a delicious image if I try again.

I decide to persist for now with one more ink image of 15d, but choose another different damaged frame to work from as well, one with a more defined real shape, 22d – the licking cow – on much bigger paper.

It was a lovely sunny day, so I was able to make a timelapse video of the inked tracing paper drying

And here are the two new images dried and stuck to my space window:

I’m not really very pleased with them. The masking fluid did the same thing and peeled off ink once it had dried and I could rub the fluid off. The pigments are strong, but not subtle. The images look crude. Maybe I’m over thinking things and they’ll grow on me. Time to do something else.

My tutor, Jane Watt had suggested I take a look at this exhibition at Tate Modern. Before my visit I’d read a little about Agnes Martin, and was not sure her work would be particularly relevant to my project, but after spending a morning absorbing her work, I admit I was wrong.

Martin’s working methods were very different to mine. She was almost obsessive in her attention to precision and consistency. I’m not naturally systematic or tidy. Despite this, to my surprise, her work had great expressive emotive power. From the pieces collected for this show, I think she achieved this because she made works that are so sparing of distracting clutter that they force you to stop and analyse their effect on your brain, but also:

– by restraining her colour palette so that minute variations in pattern and pencil/pen/brushstroke are exaggerated;

– by rehearsing and experimenting on a small scale before moving to her big canvases;

– by using the same size and shape of support, either for her small rehearsals, or her big pieces, so that differences in variation of pattern or proportion are also exaggerated.

I was thrilled to see many of her small pieces were made on tracing paper. She made full use of the magnified variation in tone given by tracing paper, although her paper was far less crinkled and damaged than mine has been. I suspect she kept her paper better by using a single thin wash of colour, and not taking it to the edge of her paper, so that the distortion affected the unpainted border evenly. Her paper is neatly and evenly crinkled round all edges.

Here is one of my favourites: 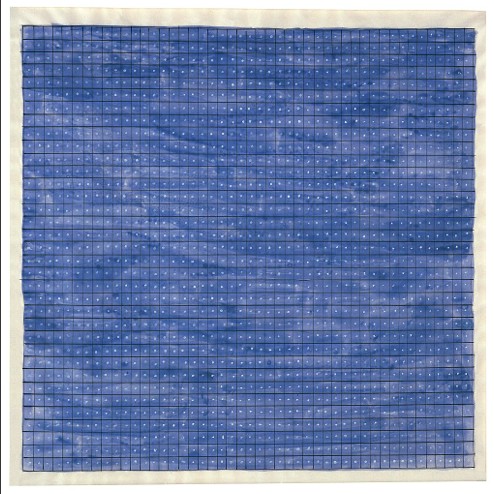 Although her elegant minimalism is far from the eclectic colour and texture of my ciné film project pieces, she seems to be attempting to provoke a similar sort of emotional connection with her work. I can see that what connects my sequence of images might help to work in a similar way for my viewers – if I can display them in the right way. Her tracing paper images are in simple plain wood box frames. Something to bear in mind when planning how to show mine. I am not sure it will work for all of them, as light shining through them has become an important consideration for me.

I had less time to spend here and it was very crowded, so I could not see the film showing in the first room for bodies, I had a lovely time looking at the rest of this exhibition. I’d seen a couple of his boxes in other exhibitions before, but it was a real treat to see so many examples of his work in one place. I love the intimacy of Cornell’s work – you can see the effort he has taken to make familiar things into something ‘other’, and his delight in taking your head into another place.

The written information for this show really helped bring it to life. I know writing is ‘definite’ and could be said to clutter a visual art display, but these are mainly small, detailed pieces, full of found text and imagery – they make you long to know more, and this information was useful. Cornell called himself an ‘armchair traveller’. He was fascinated by the wide world, but never explored it in reality. With his invented objects and collages, he was doing something similar to what we all do when we try to recall stories we only partially remember or understand. This is at the root of my own project.

Some of these exhibits, such as these two, were especially interesting as ideas for showing my own ciné film pieces:

If I put a collection of my pieces in one case/box, their dissimilarity could be really intriguing and their transparency, like the glass/mirrors of Cornell’s Pharmacy, could look good, especially if I manage to illuminate them somehow.

Later I managed to see Cornell’s film, Gnir Rednow, click here for a link to the site where I found it. This is brilliant! I never realised Cornell made film from found off-cuts! He got Brakhage to film this elevated rail journey to make a film project for Cornell called ‘The Wonder Ring’, but later made Gnir Rednow from the strips of film Brakhage had discarded. This is far more sensual than a simple train journey because Cornell’s unusual collection of sequences emphasise the patterns and shapes of the trip and its landscape, and the patterns of movement. It makes me want to make more from my own lost and damaged frames…

During the summer holidays, I spent time sorting out the damaged frames from the good ones in my ciné film collection. It is slow-going. I’m trying to collate them in order. I will add to it as I find time alone with my laptop, but I’ve made a start. I am interested in the way damage has accumulated through sequences of frames, so for now, I am looking at them as a collection of tiles: 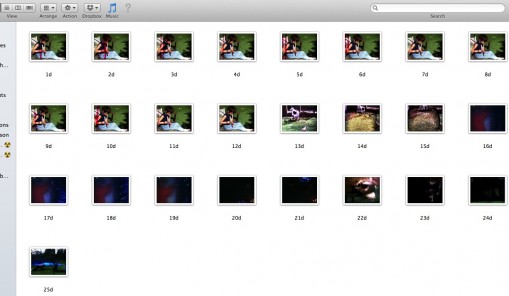 Here are a couple of these frames from this new sequence. They are the most damaged ones, and seem to me likely to be good subjects for expressive re-making.

Back in my studio I made a start on a couple of pieces of tracing paper with Frame 18d. This frame has patches of zero pigment, so I’ve unearthed a pot of masking fluid and apply specks of it where these bare patches are before I begin with my acrylic inks. I want to use inks because they are so richly pigmented, I hope they will be a good way to catch the depth of darkness in this frame, to contrast with the specks of light.

The masking fluid looks worryingly loose, and will be difficult to peel off. I invest in a new pot and make a start on two versions of Frame 15d using the same media but new masking fluid:

The inks are really wet, and will keep the masking fluid from drying too, so I have to leave these to dry for a considerable time before I can peel off the masking fluid. I’m pleased with my versions of 18d, but concerned about the ‘pool of vomit’ effect of my attempts at 15d. Not sure drying and peeling will help!