Well, my project this week was to use photos of the prints I made and blogged about for my last post to make an animation of the original image. I scanned them into my computer, and then set about creating a moving film with them as I have been doing with the lost and damaged ciné film frames.

Sadly I recently updated my computer to Apple’s latest operating system, and the new versions of the software I had used before utterly defeated me. I must have spent three hours creating projects of blank frames, scouring google for solutions and cursing every technology that used to be my friend… Until I decided to have a go with my phone using an app called Stop Motion.

It sounded too good to be true. But thankfully this app did everything I needed as swiftly and slick as I could ever have wished. There was a nasty moment when it looked like my animation might have cartoon curtains, but I’ve managed to avert them, and here is my new video:

It is short, but I’m very proud of it. Should we suffer for art? I think life’s too short.

After tucking up my roll of pastel picture, I’ve decided it is time to tackle a new image from the cine films. One has a brilliant blue singe mark across it, and some interesting life going on ambiguously across it. I’ve decided to make this on an A4 sheet of 90g tracing paper. This is an odd composition with trees in it – I never manage to get trees to look like trees. There is a dog in the original moving cine sequence, but in this damaged frame it happens to be behind the foreground tree, and indistinguishable from the tree trunk. Anyway, I make the pastel painting. Here it is: 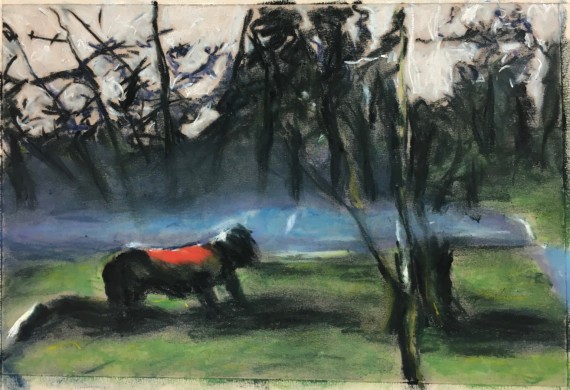 I think it works well. The colours are brightly contrasting, and lead you to think this is definitely a meaningful image, but the figure contradicts this. Red clothing makes the figure stand out significantly, yet it is crouched, and this posture says it is also still, and oddly directionless: it faces in a direction, but without an object of real interest to hold its gaze because there is no dog, just a tree. The blue mist of the frame’s singe mark looks bright and cheery, but also other-worldly. I fix it to the studio window and sun streams through it: 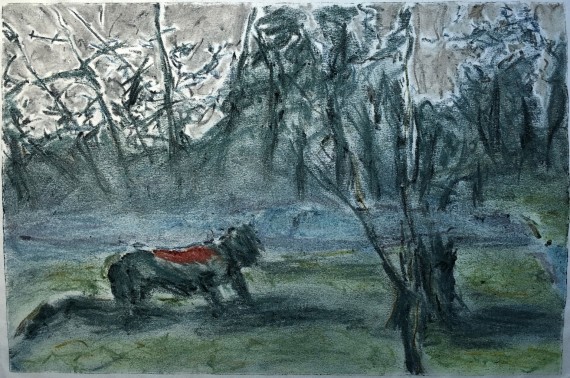 I hadn’t realised how little pigment I had applied round the winter trees and the figure. Now they look odder with a bright halo. The trees look spookily alive. I was concerned that this paper bears its wetting with fixer very well, and after lots of handling it has barely buckled. This works well with the image, though. The steadiness of the painting’s surface says this is an important image being treated with respect, but the image itself is difficult to understand.

I had been wondering whether I should move on from working with these tracing paper and soft pastel images, but I don’t think I can. There is something delicious about handling the pastels and the brittle paper, and athough I always start off confident I know how they will turn out, these paintings keep surprising me.