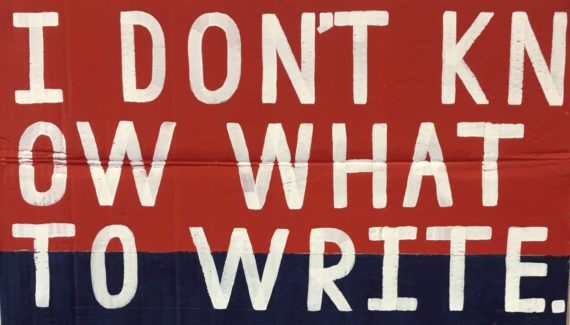 To begin semester 2 I had a tutorial where I discussed what my plans were for my studio practice for this semester, and I decided I wanted to document my day-to-day life through my art. Which involves the work I had previously started last year as I still want to get my personality through in my art.

I began this by using a pizza box I had from lunch and drew into it the Cathedral in Bury St Edmunds as I had visited the Cathedral a couple of days before and taken some photos. Through my week I normally take some photos on my phone to document what I have been doing and so I would like to use these in my work. I also plan to incorporate the date into each piece as it will link them together and also keep track of when I did each piece of art. I want to not worry  about the reason behind my work so much as I feel it often stops me doing work as I think too much about the reasons behind the work. 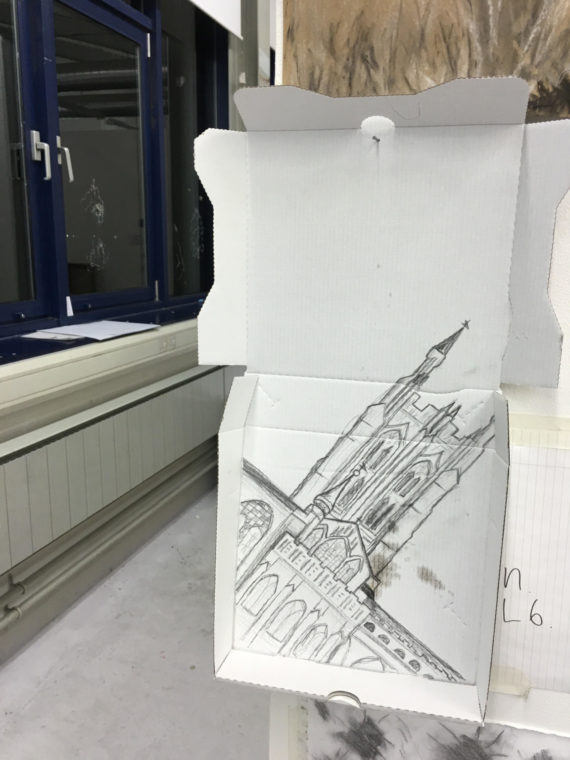 Last summer I began learning some calligraphy by watching others writing on instagram and then practicing each letter until I developed a few styles I liked. I would like to use calligraphy in my artwork as I really enjoy it and I think it will work well with the theme of documentation. I could use this to write lyrics of songs I am listening to at the time or songs I am learning on guitar, I could also write sections of books which I am reading in my spare time. 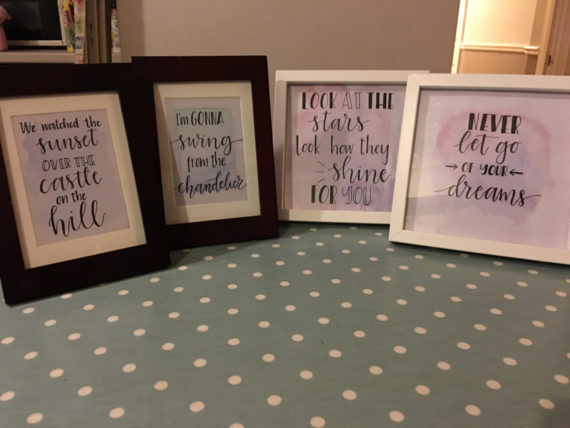 So far I have completed four pizza boxes with drawings and writing inside which relate to what I have been doing through the week. I have also done a little watercolour painting of a slice of pizza. Each box tells a different story, and some have more detail than others. My most recent relates to my weekend back at home: my brother getting engaged, having a games evening and songs I am enjoying at the moment. I think once I have a lot of illustrated pizza boxes they will begin to look more effective on the wall. This could link to pop artist Andy Warhol and his repeated cans of Campbells soup.

As well as pizza boxes I want to begin exploring other ways of documentation and introducing new mediums into my practice.

Last semester I began with a new subject matter, one which I felt would keep me focused for the entirety of level 6. The subject I chose was basing my practice on myself and so making my art personal to me. I wanted to get across in my work my personality and how I don’t like to be centre of attention, and so I began last semester taking photos of myself but without my face being in the images. I did this by having my back to the camera or by covering my face with a hoody or my hair. I am interested in using photography in my practice as it is a medium I have always enjoyed and want to explore it further. Some of the photos I took were long exposure photos taken with an infrared filter which allowed me to take long exposure photos in quite bright light. I went back to where I used to live in the countryside and set my camera up on a tripod to keep the camera still and used a timer setting so that I could take my own photos.

I had the idea last semester to possibly expand on my idea to things that interest me and so building up a profile of myself through my art. This is more of what I have begun focusing on this second semester which will be explained more in my next blog post.

Through doing the drawings of myself, there were some interesting conversations started between other students on my course. Some people don’t know who the drawings are of, and a few have asked if they are of my sister. I like the element that people who don’t know me very well wouldn’t particularly know it was a self-portrait but people who know me well would know they are of me. I also like how generally people want to know who the person is in the images, does it matter who it is? Does that impact the viewer more or less by knowing?

Before Christmas I had been drawing as my main medium along with some photography. Drawing has always been my favourite way of working, and last year I got into large scale drawings using charcoal which I really enjoyed as they were really free. I like how you can easily smudge the charcoal and redraw certain areas of the drawing if it isn’t right or the composition needs changing. Working large scale has worked well for me so far as I stand up to draw with the paper on the wall and so it makes me stand back and look at the drawing more than if I was doing a small drawing, by doing this you can see the whole image as a whole and see if the drawing is working well or not.

I plan to try out some different techniques of working, because although I love drawing large scale, it is not always very practical and I would like to explore other ways of working. In first year I really enjoyed printmaking and I have wanted to return to that medium as it links closely with drawing and you can do multiple prints of the same image to then work back into in different ways. I also like how with a print you can’t see what the final outcome will look like exactly until you have been through all the processes. I may also try some painting as this another medium I have enjoyed in the past. The medium I use doesn’t really effect the subject matter and so I would like to explore different techniques if possible. It is also my last year at university and so I want to make the most of the facilities they offer.

For my dissertation I was looking at the different roles of drawing and so I could link what I found out into my own practice. One of the main points being using drawing as a way of planning future pieces of art.

For my first blog post I want to share some work I have done over the three years of being at University of Suffolk and show how my work has moved on and (hopefully) improved.

I began studying at University of Suffolk immediately after sixth form, with no idea of what direction my practice would take, and it’s fair to say that my ideas have changed multiple times over the past couple of years!

After our initial 12 weeks of first year where we experimented with each medium: painting, sculpture, printing, lens based and drawing, we were left to work towards any subject we wanted. As my only experience of studying art was from GCSE and A Level I was used to being given a title to produce work from, but as I quickly realised, university is very different! For my first year I based my work upon concerts which is one of my main interests. My final piece was a large scale mobile phone which I made out of cardboard, I also did a lot of print work based on this theme.

When I started second year I wanted to begin with a new idea as I felt I wanted something that I would enjoy making work on more. One of the ideas I worked with was drawing animals, mainly endangered animals, and working with ballpoint pen. I really enjoyed this but the idea behind the work was lacking. For my professional practice module I also stuck with this theme, I went to the RSPCA and took some photos of their animals and drew some of their dogs for them. The drawings were then put into a raffle to help raise money for the charity.

Part way through second year I realised that this idea wasn’t going to keep me focused for the rest of my time at uni and so I again changed my idea. I began with a simple idea of drawing small everyday objects but large scale. I worked with charcoal which I found to be a lot more free than ballpoint pen and meant I could easily draw large scale. Once I got started on this idea I started to enjoy my practice a lot more and found myself in the studios working a lot more often.


I have now started my third year and I was originally planning on continuing the idea of drawing small ordinary objects large scale but from looking at an artist who I found online, Anouk Griffioen (who I found from searching for large scale charcoal drawers), it inspired me to think of a new idea where I could base my work upon myself (more about this in blogs to come). The work will still be large scale and mainly charcoal (I think!) but this idea could lead me in many directions and could ultimately be more meaningful than work I have previously produced.
0 Comments