there was a period of time with this project where it did feel like it might not ever end.  it is now complete and i’m in a place where i can take a moment to look back over the project to reflect. 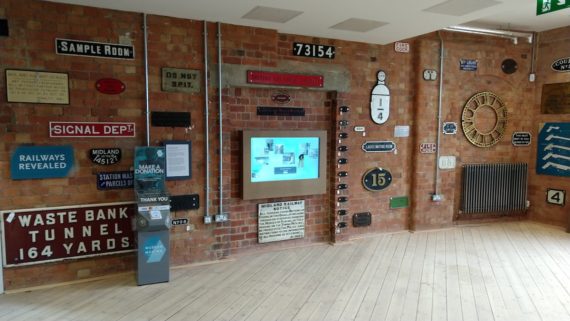 i’ve needed some time to be able to do this, the final weeks leading up to the opening became incredibly intense.

throughout my time on site i was aware of how something ‘shifted’ from time to time.  for example at a personal level when first going on site with the construction team it was how i looked at the bare spaces.  to start with i looked at them through the lens of what i knew them to be – when the museum was open.  in one of the very early edits i placed into the project i found myself telling the workman i was being shown around by what the space used to be.  what we were looking at was the space laid bare – back to the bricks and beams that hold up the roof.

i can remember how over time i adjusted to seeing the building as it was at that moment.

looking back i’m not sure if it was a plan or if it was simply easier to not go too deeply into what the building work would entail.  working with the site manager – mark garratt, i knew a few weeks in advance of what large works would be coming up.  in speaking with him near to the end of his time on site i learnt how it was for him during the project.  how the ipi process influenced his working process.  what aspects of the project gave him sleepless nights.

now i’ve had to to reflect, like mark, i can say this project got under my skin.

mark was just one of the many people who made me feel welcome and safe on site.   this friendliness and welcoming made my early weeks on site so much easier.  i’ll be honest with you, i’ve not worked on a building site like this before and it took me quite a time to find my feet.  what also fed into this was the uncertainty that the nature of working non linearly presents.

working non linearly by its very nature takes away a narrative structure that might otherwise be in place.  since completing the project i’ve been to a series of conversation webinars about storey telling and augmented reality technology.  in those i heard artists speak of working with community and presenting their work in a non linear way – as their preferred option.

so in other words for a long time of this project i didn’t know how it might look.  for a lot of the project i filmed and listened, explored stories that interested me and researched how the work might look.

throughout the process there were the arts and heritage volunteers meetings chaired by the arts and heritage producer sue ball.  working with sue was a complete joy. to be honest with you attempting to sum up the time i worked with sue into words is a challenge as we went through so much in getting the project onto the wall of the museum.   briefly referencing my conversation with mark, he spoke of the problems the project threw up and how he worked to solve them.  with sue we had a lot of conversations that orbited around problems.  no matter what they were we always were able to find a solution and always with good humour and integrity.

i’ve already touched upon how over the course of the project there were ‘shifts’.  what surprised me was the shift as the construction work wound down and the museum ness of the building wound up.  i felt it again as the museum moved from a museum in preparation to a museum opening to the public.   i never anticipated how emotional i would become as the building moved towards opening.  to some extent the emotion was fuelled by the experience of looking at the building through the lens of building work phase.

in the work are some of the memories i have of conversations with the people on site.  across the board of those involved.  there are some people who i’ve not been able to include and this is the biggest learning i take with me into the next project i do involving a community.

when i take a step back and look at the installation as it is in the museum, i sense how much has been achieved by every one involved and how i played my part in that.  i remember talking way back when about wanting to represent the voices of those doing the work on site and this being commented upon by one of the architect team.   i feel i did ok in this respect.  i feel pleased with what i have achieved.

i feel pleased with how the installation looks and can be interacted with.  there are some aspects of the environment i would have set up differently and over time this evolution might yet happen.  the museum of making is some respects remains a work in progress and this is what makes this place truly unique.

it’s still sinking in how i’m a part of that uniqueness and it might take some time – as we all emerge from the restrictions needed because of the pandemic.

and with those restrictions going will come the one thing i’m missing – the celebration of what we’ve all achieved !