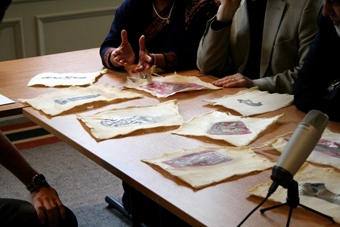 Anyone who spends time in the East Midlands will know about the peculiar imbalance between the 'three cities' of Nottingham, Leicester and Derby (in descending order of esteem within the visual arts). I would like to think that 'contemporary arts' includes all contemporary art forms, but specific roles have been created for each of the three cities. Recently this has been exacerbated by Nottingham being granted the new Centre for Contemporary Art Nottingham, whilst Leicester has been deemed a dancing city, and with the new Quad building Derby will forever be the place where photographers dwell in isolation.

My point, is that contemporary arts activity happening in the other two cities will always struggle, unless you are commissioned AND well supported by the city gallery in either Leicester or Derby. This is the story of a project that attempted to gain an outside perspective on the way Leicestrians can relate to and interpret their own archaeology. It was a conceptual based visual art research project, and though initially supported by the city gallery off-site team, it did not fit well with the way other visual art is generally created in Leicester. It was largely research based, and involved several academic procedures, but the scope and manipulation of these processes distanced the project from its source academic fields of archaeology, anthropology, museology, visual studies, interpretive studies etc. The project also invited numerous contributions by cultural representatives from Leicester, but remained aloof from any other creative field or institution. It was, wasn't, then was again, changed state three times then became something quite different, and I believe created one or two lasting elements of value.

I hope that this blogging is not merely a therapeutic undertaking for myself, but that it will give other artists working in the region and beyond a sense of the challenges that can mount against you if you choose to work outside of the gallery environment, especially if you rely upon the generosity of non-art-based cultural and academic institutions. That, or perhaps it will serve as an amusing trawl through the peculiar mental workings of yet another provincial artist obsessed with some element of the way we perceive information around us.