As I mentioned earlier, I thought the Capital of Culture year in Liverpool pretty much ignored and perhaps even took money out of (?) the grassroots art culture (some of the best, fiestyest and most innovative in the country may I say!). That fact seems to pale into insignificance when the olympics loom into view.

criticalnetwork put it very well on their latest bulletin:

“criticalnetwork says NO! to the Cultural Olympiad

As a collective of artists practising throughout the UK we directly oppose the Cultural Olympiad at every level on the basis that it aims to co-opt the work of artists to white wash the crimes of the 2012 Olympics and manufacture an appearance of acceptability at the expensive of (primarily grassroots) arts activity throughout the UK.

A large proportion (more than £200m) of the ludicrous £10bn cost of the 2012 Olympics is being redistributed from the arts sector nationally and is creating a culture in which artists and art organisations are compromising their integrity, desperately trying to incorporate irrelevant Olympic themes in to their work in the hope of receiving financial support. The Cultural Olympiad is the folly of cultural middle-managers and policy makers, it is art as tourism, it is the Capital City over the rest of the country, it is not going to feature on criticalnetwork.”

Couldn’t have said it better.. I hope the park will at least continue to be used, how depressing to go somewhere like Barcelona and see a garveyard of a park that was once an over-budget, must have thing just for the Olympics. I am not a fan, yet here I am trying to get a flight from BA in their competition. This is all tied in with the Olympics and they say on the website ‘This scheme will look for individuals who demonstrate the values associated with Olympic and Paralympic Games and who strive to be the best’ hmm, I strive to be MY best, which is not the same thing.. but I really want the flight. Victoria, a book artist in Argentina, and I have been emailing for ages and have also been brewing great plans! Am I a hypocrite? Is British Airways giving away free flights (based on some bizarre voting scheme, but they go ahead and pick the shortlist regardless) system the same as supporting the Olympics? I hope not!

Don’t even get me started on the allotments.

Do any artists really want the Olymipics? I’m curious.. 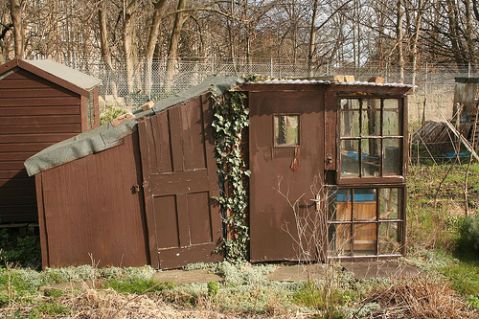