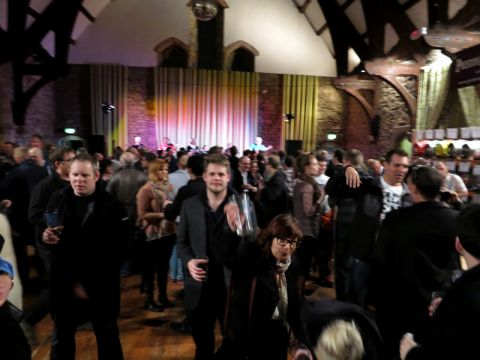 Had a great meeting on Thursday night with Charles and Elaine from In Certain Places to discuss how the project is going.

Here’s a quick run down of where I’m at.

– Brewing a 7.1% IPA early next week which should be ready for The Preston Beer Festival (15th March – 19th March)

– Contacted CAMRA about the project and also Northern Craft Brewers

– discussing the idea of a Science Bar which will be open for the duration of the Guild, this would be the perfect setting for a TOV ale. We are planning a series of events for the bar. Lectures, Chemistry magic shows, films, bands. The idea is inspired by the History of the Univesrity and its timeline going back to Horrocks. Especially the Society for The Diffusion of knowledge

I love the idea that I’ll never know if its recreated – but would like to give it a good chance.
So the new idea is to have a Transit of Venus Real Ale Competition. The winner will have their name engraved on a special trophy (reminiscent of 70’s pub Darts Trophies – my Nana had a few). The Trophy will have small metal plaques with the dates for the next 1000 years worth of transits with space for future winners.
The central column will be like a time capsule and the winning recipes will be stored there. I invisage that the Trophy will be on display either at the Harris Museum fro the duration of the Preston Guild 2012 in September or at The Science Bar – I am in discussions with The Continental pub and They Eat Culture as collaborators.

In relation to the Real Ale competition I was wondering if it could be held in Much Hoole – some of the residents could be on the judging panel? I can’t decide if the competition should be on June 5th or earlier. I’d like the winning ale to be professionally produced and it could be 1 of 3 ales in the box set.

– whilst being shown around the temperance society archives I realised that what stands out are the objects – I was shown Joseph Livesys football rattle. This was also the case at The Harris when I was shown some material relating to Moses Holden. So it seems only right that to stand any chance of setting up a tradition that there is an object and its made of something that won’t perish and that the object contains the information.