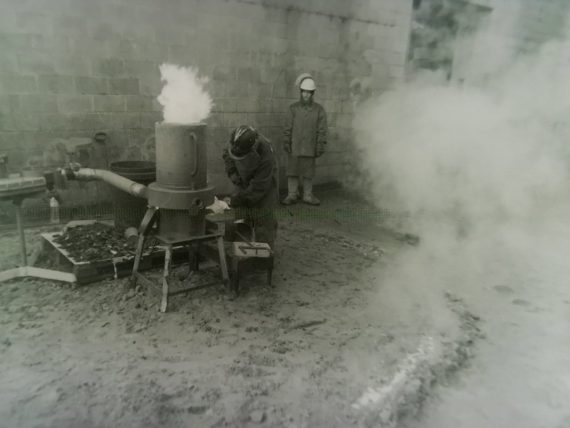 By placing the grapefruit flesh into the iron vessel it gives it a fertile nature that if I consume I can attribute to myself.

Hermetic philosophy describes a connection between speech and sex in a physical sense. The architecture of the body describes the tongue, through the spinal chord is connected to the genitalia.

This surreal and visceral imagery of this connection, relates very strongly to the conversations of fertility that myself and my partner are having to partake in.

The clinical element of silicone tubing connecting two cast iron life casts has both umbilical and spinal significance; I have twisted and tied it. Struggling with scoliosis my spine is a large element of fertility considerations. 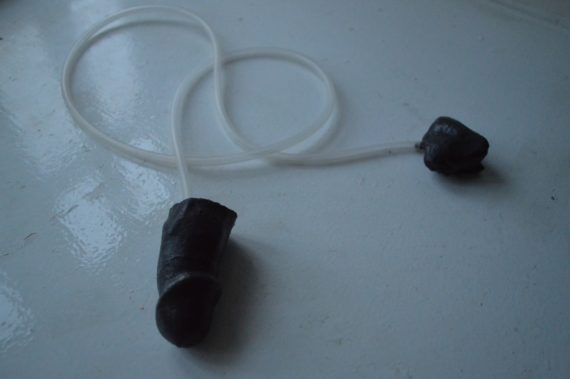 I have found during an iron pour I am always on my period. It either starts the day before or the morning of the pour almost without fail. Even the first time I participated in a pour, when I was unaware I would even be part of it.

I don’t know whether it happens because I am nervous that I will be on whilst pouring, as I know it causes me extra pain and tiredness which makes the pour harder and that anxiety brings it on. Or the extra manual work I do on the lead up to an iron pour triggers an early or late onset. I find that I get warning cramps and tiredness alongside the excitement of the lead up to a pour.

Up until now this has been an inconvenience but I feel that I have found a purpose in it and that it actually intensifies the rawness of my experience during an iron pour, heightening my relationship with the furnace and makes my role of running the furnace even more purposeful. I feel I have a deeper understanding  of my connection to the furnace and the reproductive paradigm she carries. Two bleeding vessels; an ultimate female experience.

The top stack of the furnace is usually made from a rolled steel cylinder which has to be lined with refractory in order to stop the iron from melting through the steel. In industrial scale blast furnaces the lining is knocked out and replaced after each time the furnace is used. The lining in contemporary cast iron art furnaces are relined when the lining degrades, depending on how often the furnace is run. This lining of the furnace seems symbolic of the uterine lining, detaching, shedding and regrowing as a cyclical action.

The furnace is filled with iron that can be seen melting through the tuyeres, the transition is marked by the dripping of glowing white  liquid filtering through the layers of coke (fuel). Alongside the tuyeres being used to see what is going on inside the cupola, they also feed the furnace with air from the fan belt. The forced air is what creates the blast zone inside the furnace, allowing it to get up to such a high temperature in order to melt the iron. This could be reflective of an umbilicus, giving the fire the life it needs to gestate the fetus inside of it.

The tap hole retains the same representation of vaginal opening as the traditional, hand built smelting furnaces. Tapping the furnace to release the iron correlates with dilation. A tapping bar is pushed into the sealed tap hole then rotated so that the tap hole is widened. When it is pulled out it releases the flow of molten iron and the birth occurs. People are gathered round focused on the furnace, in her moment of glory for this release of volatile offspring.

The slagger is positioned higher than the taphole and in most cases on the opposing side. When running cupolas it is used to determine when the correct amount of iron sits in the well to tap. Slag is all of the impurities of iron mixed with marble as a flux. It is lighter than iron and therefore floats on top of it. The iron will fill up the well and allow the flux to rise up and out of the slagger. Once iron starts to flow out of the slagger it is clear that the furnace is ready to be tapped. This purpose of the slag here is to pre warn the flow of iron as well as separate the impurities from it. ‘The running of molten slag is equated with the rupture of the waters and the beginning of the labour pains.’ (Herbert, 1993).

Unlike traditional smelting furnaces or coupolette furnaces, the slag does not come out of the tap hole and therefore is unlikely to be seen as any sort of afterbirth. Instead it could be construed as spotting, discharging of the mucus plug, or the water breaking: that warning to labour. Alternatively the slag could be seen as fecal matter due to its waste properties and the placement of the slagger on the opposite side to the tap hole. Others regard it as the flow of menstruation ‘both are waste products of the creative process.’ (Herbert, 1993).

It is difficult to say whether one tap could be considered the action of birth or if the taps become cumulative impressions of contractions. The longer the furnace is run, the closer together the taps occur as the heat of the furnace intensifies. Perhaps the whole process is considered a birth, the procedure either culminating in the last tap or all of the taps being seen as one. Either way the crux is that release of molten metal. Once the final tap is complete the bottom of the furnace has to be dropped to avoid the iron freezing inside of it, making the furnace unable to be used again. The bottom of the furnace dropping out is synonymous with the afterbirth, the clearing and the completion.

To aid the furnace in these motions is the ultimate simulation of the female. The pain and physical exertion (labour), the heat, concentration and lethargy, the overwhelming feeling of achievement and production. As if to experience birth itself. 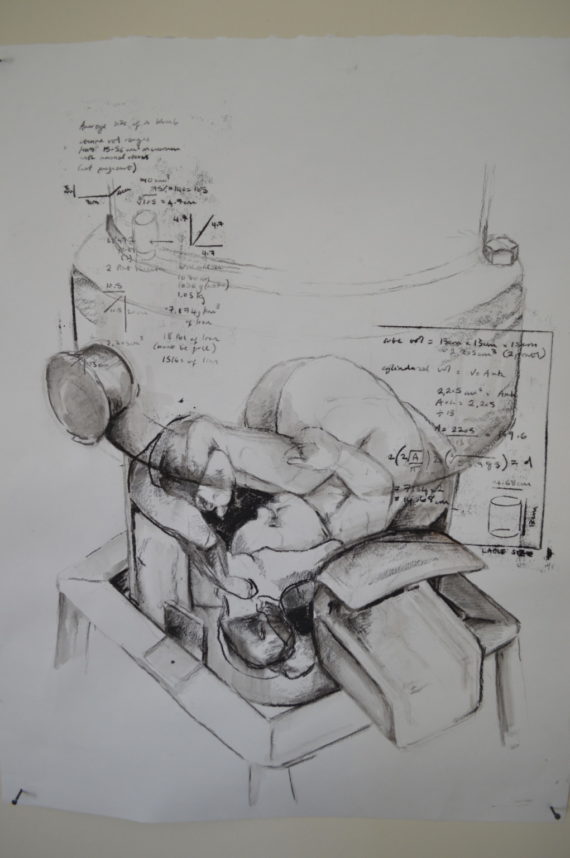 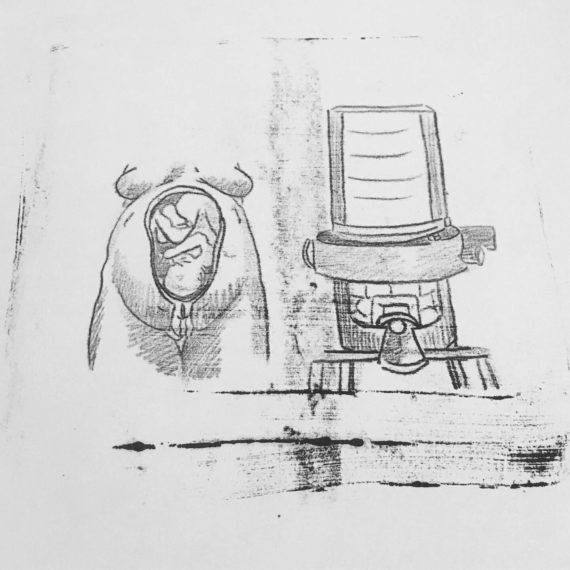 Contemporary cast iron art cupola furnaces retain gynepomormic female elements, the process of melting iron is informed by industrial blast furnaces yet reflects the imagery and personal scale of traditional smelting furnaces. Gestation and running furnaces are mimetic to one another, a reproductive paradigm. The ore, the metal and the artwork all contain embryonic semblance. The symbolism within furnaces is evident just by looking at drawings depicting the inner workings of bloomeries, blast furnaces and cupolas and comparing them with female anatomical diagrams.