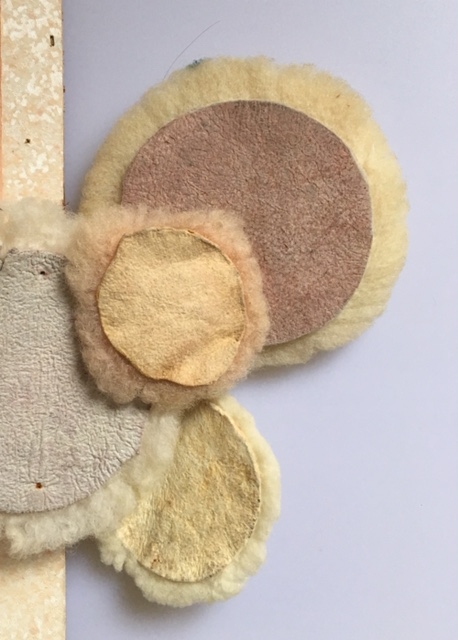 After posting images of some new work on social media recently, I had a couple of responses from fellow artists around the subject of smell.

‘I can smell them from here’ was a comment from artist Elena Thomas in response to me posting an image of used powder puffs a few weeks back. And artist Marilyn Kyle responded to ‘a pink and beige’ image I posted on Facebook this week with: ‘I can almost smell the moth balls and lavender.’ It’s always nice when people take the time to respond – not only does it help me feel connected, it also makes me mindful of the universal appeal of objects and the numerous facets associated with them.

Powerful, evocative smells come to mind frequently for me, particularly when I’m working with objects that focus on my late grandmother. ‘Nana’s Colours’ especially conjures up the many varied sorts of smell, of baking and cooking, of pomanders, bowls of pot pourri, scent bottles, powder puffs and compacts – redolent both of a woman’s domestic and her more intimate, personal life. 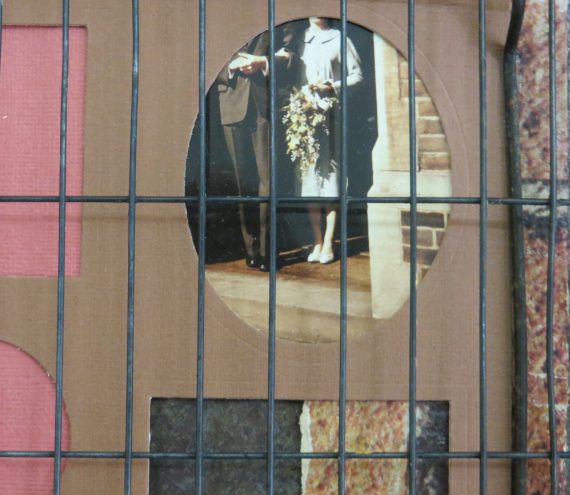 I spend a lot of my time sorting and sifting through boxes and suitcases as part of the process of making work – seeking out those small, specific ‘just right’ things that somehow complete a piece with a final, finishing touch. My collections have become more and more organised over the years – the boxes pretty much all labelled now, and so there aren’t as many surprises as there once were. Sometimes, though, in the sorting process, I can still be surprised – just as I was this week when I was having a final rummage to find things associated with female identity. I opened a box in which the top to a bottle of perfume had come loose and the perfume had leaked out. The scent was strong and pungent – a generic, floral kind of smell that transported me right back to my childhood – to moments spent with my Nana, when as a special treat, I was allowed to sit at her dressing table and play with the things on it: face creams, powder puffs, beige-coloured powder, perfume bottles and lipsticks, each with their own unique, haunting fragrance.

Scent is transportive and the perfumes associated with various chapters of our lives, often memorable. Scientific studies have proven an intimate connection between scents and our emotions and memory. It’s why memories triggered by smell as opposed to other senses are ‘experienced as more emotional and more evocative’ (Rachel Herz, assistant professor of psychiatry & human behaviour at Brown University, Rhode Island). Herz also remarks on the fact that: ‘a familiar but long-forgotten scent can even bring people to tears.’

I’ll soon be installing a piece of work in response to the theme of identity and the inner world. It’s a large, ambitious install with a substantial bulk of pre-owned furniture and materials being used. Many evocative objects will make their way into the installation, some of them being items that were rescued from the house in which my Nana lived for some 70+ years. I won’t be using scents as such, but many of the objects on display will undoubtedly be impregnated with odours from the past – steeped with the smells of age, imbued with a strong sense of a history and use. I’m very much hoping to have further conversations around the memories they might evoke in others.

If you’re in London and get a chance to visit the Collyer Bristow Gallery, do come along to see ‘Me, Myself and I’ a group show involving the work of twenty contemporary artists. Further details in the press release here:

Please note that the gallery is open Monday to Friday during office hours, with viewings by appointment. Please contact: [email protected]/ 020 7242 7363 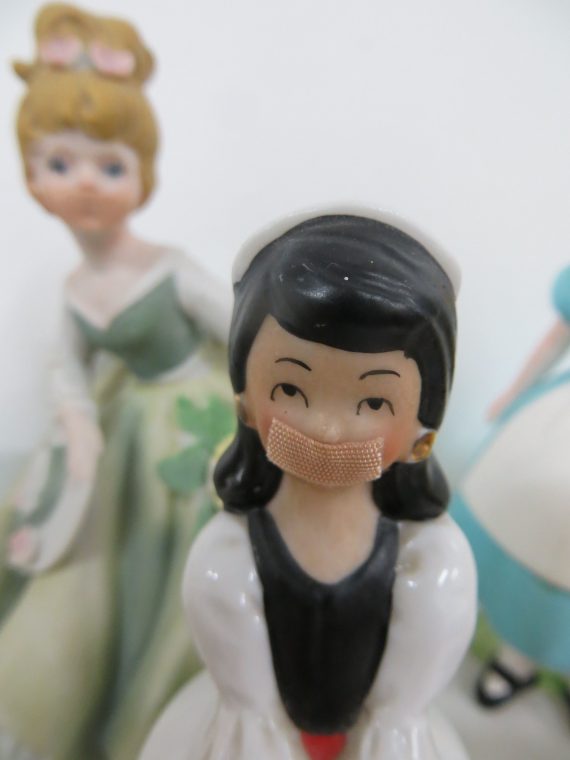 I’m delighted to have been asked to exhibit my work as part of a group show at the Collyer Bristow Gallery at the end of this month. ‘Me, Myself and I’ is an upcoming exhibition curated by Rosalind Davis which investigates issues around identity and expressions of the inner self. The exhibition opens on February 27th at the Collyer Bristow Gallery in London and runs through to June 10th, 2020. I’m very grateful for the opportunity and excited by the challenge it presents.

For my contribution to the show, I decided to take one of my existing pieces of work, ‘Sweet Nothings’ and use it as the springboard for a new, site-specific installation. I’ve placed the work, composed of a dressing table with small, ceramic vintage figurines, at the heart of the new piece, providing me with a strong starting point for an exploration into the many aspects of female identity, particularly from a feminist perspective. The muted young women, presented on a mirrored dressing table, have their backs to the viewer – their faces reflected in the mirror. You have to look quite closely to see that their mouths are covered in Elastoplast. Bound, gagged and with no voice, they call to mind the well-known phrase: ‘girls should be seen but not heard.’ In other words, decorative and ornate but without having any sort of opinion, let alone voicing it. I’ve always wanted to expand on this piece of work, and particularly to explore the many aspects of restriction and confinement that are so often entwined with female identity.

Selecting the other objects to build on this starting point has been an interesting process; a huge amount of editing has already taken place – largely because the theme of identity is such a wide, open-ended subject – but also because I’m lucky enough to have been given such a big expanse of physical space to work with. It’s also been interesting in terms of the sort of materials and objects that I’ve selected so far. The theme of identity ties in nicely with a piece of work that I’d already been working on in the studio. ‘Babes in Arms’ has so far focused on vintage images of babies in the arms, predominantly of their mothers, but also of fathers and other carers, such as grandparents.

There’s something so comforting about these images – a soft, quietened aura emanating from them, perfectly portraying themes of being loved, cared for and contained. Focusing on them has led me away from the harsher elements of life – and specifically, thoughts around the mess the world’s in right now, as well as the closer to home political situation, post-Brexit. I’ve felt completely overwhelmed by it all at times and immersing myself in more intimate work around themes of home, motherhood, love & remembrance, has felt like a welcome distraction.

The same can be said for working with materials and objects of a softer nature – powder puffs, brushed cotton nightdresses, remnants of my nana’s soft woollen blankets, and even kittens! There’s nothing quite like pictures of cute kittens to distract you and convince you that all is right with the world. But as we all know, things aren’t always what they seem and however sweet and winsome things might appear on the surface, there is sometimes a darker, more ominous side to idealised portrayals of innocence – the girls and young women with their mouths taped over being a case in point.

The finished piece ‘Objectification’ will cover a much larger physical space than I’m used to working with, and experimenting with the ongoing construction of the work has been a challenge, as I’ve had to adapt it to the confines of my shared studio space. I fantasise about having a vast, open studio in which I can line up all the various objects, stand back and look at the work from a distance. That’s unlikely ever to happen, however, and so I do what most artists have to do – work with what I’ve got and make all sorts of compromises. It won’t be until the work’s in situ that the final tweaks are made, but I would like to arrive at installation day as prepared as I can possibly be. The sorting, placing and constant editing in installation work always takes way more time than I think it will!

That said, the final editing and tinkering with objects is the part that I enjoy more than anything – those finishing touches and the deeply satisfying moments when ‘just the right thing’ is found to unite a group of seemingly random objects. There has been a marked increase in references to ‘surviving’ ‘getting through’ and building a ‘creative resistance’ on my social media timeline lately – strategies for coping and helping us through the next five years (at least). We all have our own way of managing the more difficult aspects of our lives; for me, it’s head down in the studio and getting on with the work.

It can’t last forever, but the decision to take a temporary break from immersing myself in national and international politics has helped me survive the toughest of times. Aside from everything else, a recent memory on Facebook reminded me that, as well as being affected by severe ear pain and complications for much of the past 18 months, I also had two cataract operations. They were very successful and I am, as ever, enormously grateful to our wonderful NHS, but operations and hospital visits still take their toll, emotionally and physically. I am very tired!

I was at the ENT department in my local hospital again this week, where it was confirmed that I don’t need to have a follow-up appointment for another four months. I feel I’ve seen quite enough of the inside of hospitals over the past year or two. No wonder then, that the chance to be able to focus on a new, ambitious piece of work made my heart sing. Once again, I’m grateful to the Collyer Bristow law firm for their support of artists, and of course, to the Gallery’s curator, Rosalind Davis, for asking me to be a part of another ambitious group show.