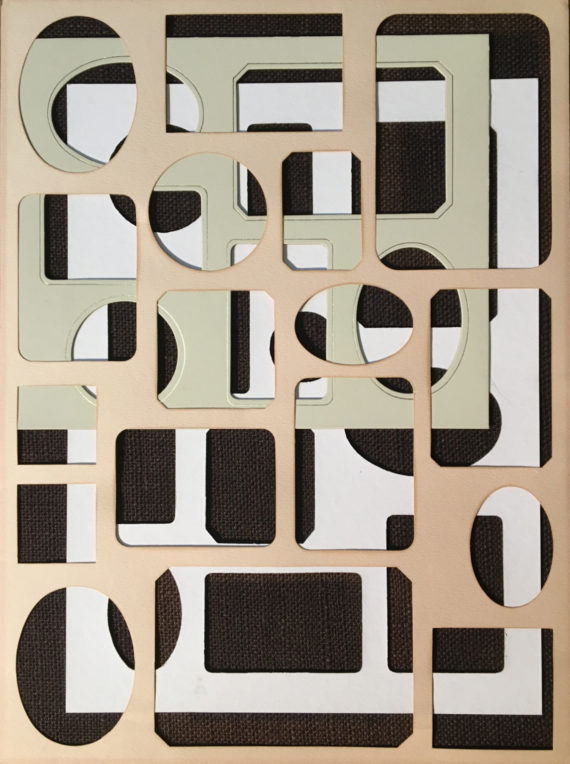 The above work was created through selecting three vintage photo mounts. They were a part of a small collection that have been in my studio for some time. I’ve used some of them in the past, mainly as part of my ‘Domesticated’ series in which, for me, they highlighted the sense of restraint and restriction experienced by women, particularly in the 1950/60 era – fenced in, trapped within a world of cleaning, baking, motherhood  – struggling to free themselves from a lifetime of drudgery.

My choice of these particular ones for the above work was primarily for their colour. But the shape of each mount and how they worked with each other was also a factor in making the finished product as aesthetically pleasing as possible. Anyone familiar with what they are will know that there are gaps where the photos should be. They are reminiscent of the displays often found on the walls of grandparents and great aunts & uncles, each photo representing a family member – a tribute to their growing offspring, generation after generation.

I was drawn to these mounts with their gaping, vacant spaces at a point of trying to make sense of the daily Covid death totals that were read out in governmental press conferences. They were presented as if they were a mere statistic, but the fact is that every single one of those numbers represented a real person – a person who was loved & cherished and  would leave a gaping hole in people’s lives. All the dead dears, all the long gone darlings should never be forgotten.

‘All the Dead Dears’ was included in the ‘Silent Disco’ exhibition, organised & curated by Graham Crowley at his amazing Greystone Industries gallery in Wickham Market, Suffolk in August of this year.