Today I have completed the second recording session in Brno. I made an hour-long recording from 12 -1 pm in “Cabbage Market” a very cosy little market placed between the Petra and Pavala Cathedral and Stare Radnice – Old Town Hall. This spot provided a great to opportunity to capture the chimes of two of the clock towers: one sacral and other secular (the oldest secular building in Brno).

“On the steep land beneath Petrov a square called Cabbage Market was created during the foundation of Brno. Originally, the square was called “Upper Market”. Middle-class houses standing on the square at the beginning were later substituted with meat shops. Today, fruit and flowers are sold there.”(http://www.brno.me/sight s.html)

The 12 o’clock chimes were captured spontaneously at the Spielberg Castle by my husband Frank and my youngest assistant 5 year old Oliver (my son). The bells at the castle were commissioned in 1990 from artist Otmar Olivio they consist of fifteen bells weighing from 16 kg to 220 kg. The bells themselves are stationary and only the hammers move playing one of 32 pre-programmed tunes every hour.

Today I have started the field recording in Brno, Czech Republic for “Kraków to Venice in 12 hours” project.

The project is based on the structure of a 12-hour clock, with time as a connecting element between several locations. 12 hours of multichannel audio will be composed from a collection of recordings made during the journey; capturing the rhythms of the cities’ soundscapes and reflecting the passage of time. In the final composition the language recorded throughout the journey – captured in the snippets of conversations, station announcements and songs of street performers – will mark the transition from one country to another and will serve as a spatial and temporal orientation reference. Polish, Czech, Slovak, German, Slovenian and Italian will be placed alongside Roma dialects.

Brno’s recordings will correspond to 12-1 pm hour on the project’s clock.

Brno is a second largest city in Czech Republic and it’s a capital of Moravia region with a extremely interesting history including some gruesome battles such as Austerlitz.

Modern Brno began to take shape after the Brno to Vienna railway was completed in 1839 and then the city developed into a major industrial centre. Brno is a university town with 89,000 students and it is one of Europe’s leading venues for trade fairs. “Despite having a population of less than 400, 000, Brno behaves like a cosmopolitan capital and stately boulevards make it feel like Paris” (Lonely Planet) 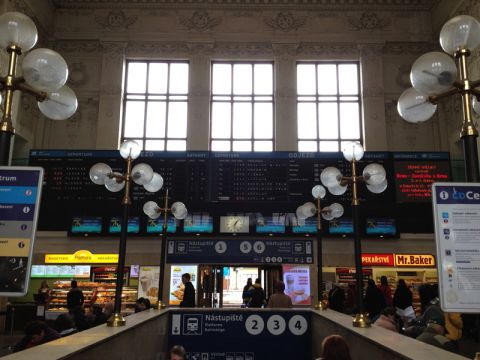