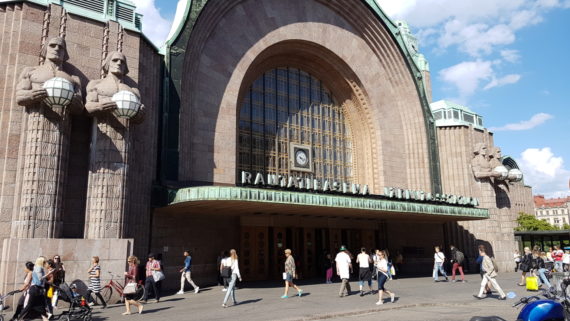 Flying back from Rovaniemi, I returned to Helsinki for the final day of my research trip. It was the first Friday of a new month, and this permitted me free entry to Kiasma Gallery, Helsinki’s flagship contemporary arts venue. But before then, I planned on making a visit to the Aalto University to see the Hybrid Lab Symposium accompanying exhibition, and the MFA Fine Art University Helsinki Degree show, taking place across three venues in the city. The standard of all these shows was exceptionally good, and I have chosen to highlight some of the artists whose work connected with my research trip and my artistic practice in general.

I started by catching the underground train to Aalto University Station, where the ‘Oslofjord Ecologies Extended‘ exhibition was accompanying the Hybrid Labs Symposium. The symposium itself explored hybrid practices between art, design and architecture; and the exhibition is the outcome of the “…art and research project that is focusing on climate, environmental and social changes in the Nordic and Baltic region. This project combines contemporary art approach with technologies, biology, pedagogy and the cultural and historical heritage, in order to create and display innovative artworks that aspire to offer new experiences in a performative manner.”

One of the pieces exhibited was a video installation by Rasa Smite and Raitis Smits. The artwork comprised of a monitor playing looped footage of wetlands that would occasionally ‘glitch’, and containers filled with soil that I presumed had been taken from the ecosystem. Further reading revealed that the containers in fact contained bacteria from the wetlands (Kemeri Marshland – Latvia), which through a process known as MFC (Microbial Fuel Cell) technology could generate electrical energy. This was made evident and explained the fluctuations seen on screen; as the footage was being glitched by spikes in electrical charge from the bacteria. The artworks research “explores local ecosystems for envisioning renewable future scenarios, by reconsidering our relations with nature and technology, biological and social systems, human and microorganism worlds.” Rasa Smite and Raitis Smits are key founders of RIXC the Center for Art and Science located in Riga, Latvia – I noted that bacteria battery cell technology and RIXC would require further reading as new and exciting research leads in my own upcoming projects around nano scale mechanisms and their applications in society. 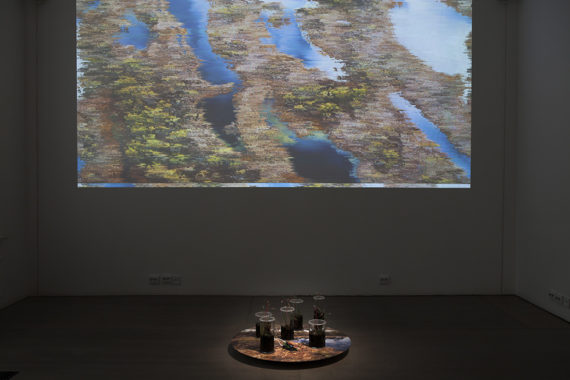 After travelling back into the city center I made my way between the three venues advertised for the ‘Kuvan Kevat’ MFA Degree Show from Uniarts Helsinki; Project Room Gallery, Exhibition Laboratory, and the former venue of the Amos Andersonin Art Museum.  Across the venues there included work from 35 emerging artists, from all four subject areas of the Arts University; Painting, Printmaking, Sculpture and Time and Space Arts. With no unifying theme for the degree show, it instead presented the artists in the manner that I had come to expect from the Finnish mindset: the necessity for collaboration in all creative fields to address political, societal, and environmental sustainability.

“In our current neoliberal society, art has the power to bring topics into public discussion which are rarely spoken about, to explore different landscapes for the future. Although art rarely produces immediate health benefits and has no purchasing power, it is not removed from society; rather, it is an integral part of it.”

– Anna-Kaisa Rastenberger, Professor of Exhibition Studies and Spatiality at the Academy of Fine Arts of Uniarts Helsinki

The work of Christian Langenskiöld I saw in the former Amos Andersonin Art Museum I felt attested to this ideology. In a series of photographs we see what I read as a visual essay in ‘being human in the 21st century’. These photo tableaux depict cleverly arranged scenes where modern human life and the natural world seem to reconcile, and achieve almost mutual balance. In the first photo a human hand can be found laid out on a table of fruits, nuts, and sea shells. Its apparent lack of importance is demonstrated by its presence on this table of items regarded today as mere curios. The vanitas feel of the photo harks back to a time when these items may have been a newly discovered item, precious by nature of their newness, and therefore there value. The hand would be reduced to nothing more than an organic piece of matter, which will wither along with the rest of the table. Except this hand will not decay as with the other organic items, as it is a prosthetic hand judging by the rest of the series, a product of very recent technology and material research.

Similarly, the other two photographs present us with a wooden prosthetic leg adjacent a houseplant, and a weight lifter who’s metal arm prosthetic allows him to life the iron dumbbell just as well as his other hand. The human body and nature here become biocompatible through technology. Domesticated plants, grown and kept indoors in artificially lit buildings; metal wrought out of the earth and cast into tools that help us stay fit, because we no longer need to hunt or run from predators. The series makes interesting comparisons between the Anthropocene world humans have created, and the natural world we have removed ourselves from, but are forever connected to. In previous centuries machines and metal robots epitomised the future for Homo Sapiens, now, organic computing and gene crafting set to become the next great leaps in human evolution. 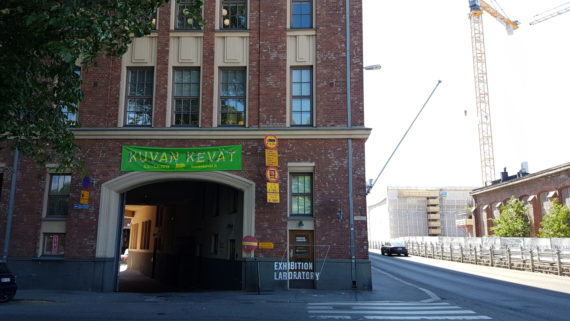 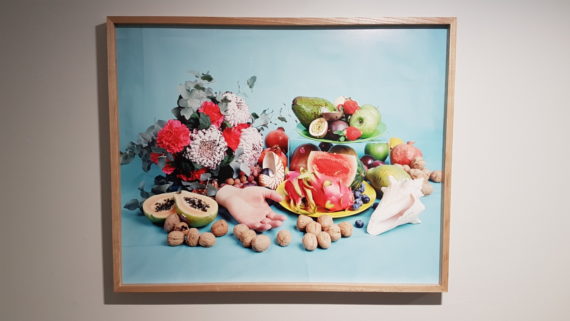 Over at Kiasma Art Museum, five floors displayed five exhibitions by various artists locally and internationally. On the third floor, the show ‘There and Back Again’ presented 26 contemporary artists from the Baltic Sea Region, including; Estonia, Latvia, Lithuania, Poland, Finland and Russia. “The Baltic Sea countries are united by geography and history. The area is a cross between many economic, political and cultural interests. The Hanseatic cities, the Soviet Union, Via Baltica, the gas pipeline and nature conservation have united and separated regions and people.”

One of the largest pieces in the show was a boat built by Estonian artist Karel Koplimets. “The artist travelled from Porkkala, Finland, to Tallinn, Estonia, on this homeward boat in August 2016. The craft is made of a wooden frame, an outboard motor and some five thousand beer cans filled with polyurethane. The cans were connected in Helsinki with the help of social media. Almost all the cans are Estonian. Crossing the Gulf of Finland on the barge took eight hours. Videos documenting the construction of the craft and the journey form part of the work. Koplimets has described his beer-can barge journey as a symbolic story of the homecoming of one Estonian worker. The artist is interested in the monetary flows and trade between Finland and Estonian. Finns go to Tallinn for cheap alcohol, while Estonians come to Finland for jobs and better pay. The artists points out that the funds obtained from alcohol taxation in Estonian are used, among other things, for promoting culture. In other words, Finnish booze cruisers help to support Estonian art.” 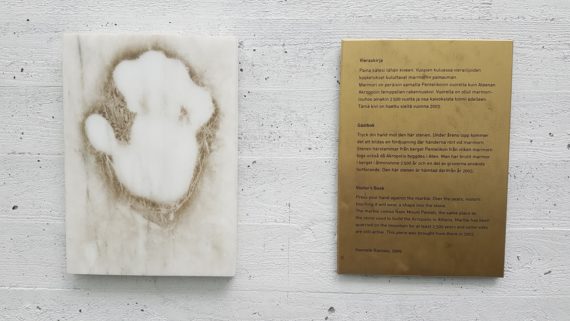 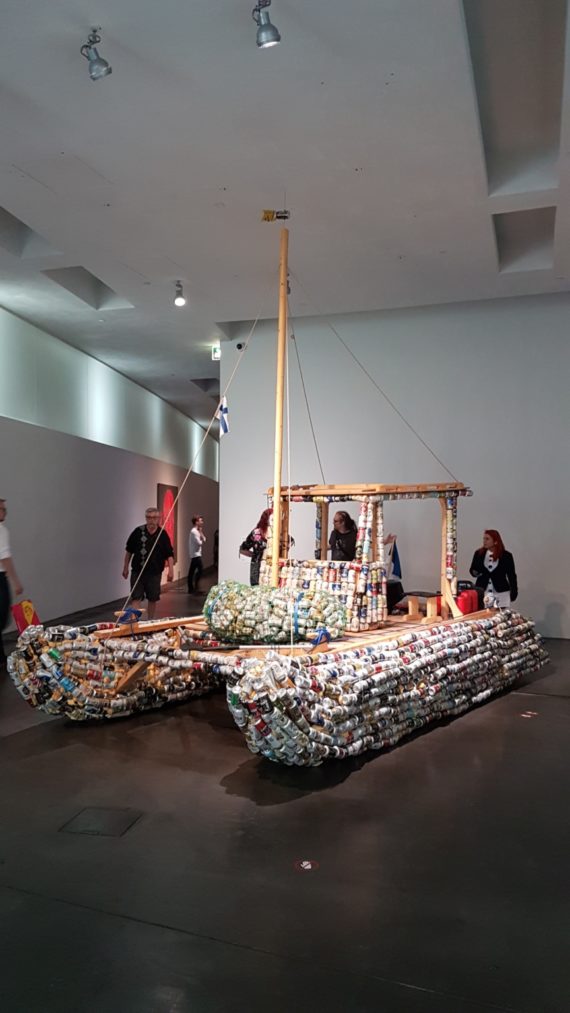 On the fourth floor was an extensive show by Nathaniel Mellors and Erkka Nissinen, who represented Finland at the 2017 Venice Biennale with their video installation The Aalto Natives. The Biennale, which is organised every two years, is one of the most significant art events in the world. Kiasma’s exhibition features the video installation that was shown in Venice and a selection of new works by the artist duo. Using humour, The Aalto Natives reflects on themes such as national identity, creation myths and nationalism. It tells the story of two aliens named Geb and Atum who return to explore a place they created millions of years ago, Finland. The new installations in Kasma continue the story of the video, with many of the animated puppets being featured in the show. 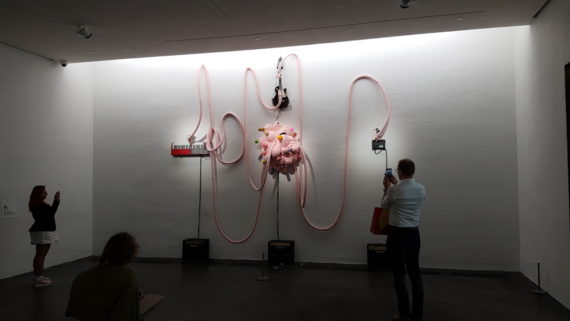 The Aalto Natives –  The Transcendental Accident (2018) 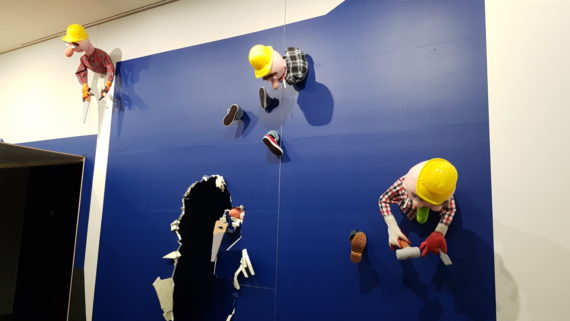 On the final fifth floor was an exhibition of works by Grayson Perry, many of which I had not seen before. Grayson Perry explores subjects that are universally human: identity, gender, social status, sexuality and religion. He is a chronicler of contemporary life, yet he favours traditional materials and techniques such as ceramics and tapestries. His exhibition, titled ‘Folk Wisdom‘ spanned two decades of his career, and Grayson Perry is quoted as saying about folk wisdom ‘They are not necessarily rational or scientifically proven, but in them, more often than not is a grain of truth”. In the ‘Artists Robe’ and ‘Map of Nowhere’ the human body is extended out, into clothing, and across the city of London, commenting on how cities and fashions have become part of our identities, our bodies inform them, and they inform our bodies. This perfectly summed up, what I felt in part, my original meeting with Kira O’Reilly had instilled me several days prior.