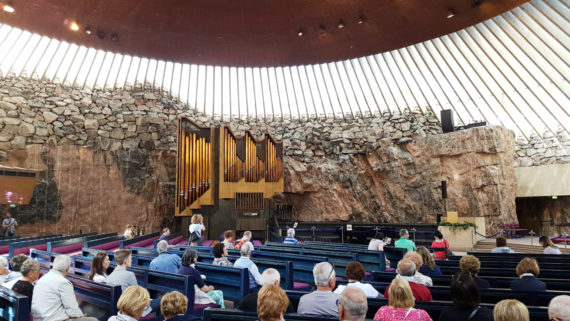 On the morning of my first full day in Helsinki I visited the Temppeliaukio Church – walking distance from where I was stopping on Iso Roobertinkatu, Helsinki’s oldest pedestrian street and situated on the edge on the Design District. Temppeliaukio Church sits inside a circle of excavated rock, with the altar wall inside a split in the rock dating back to the Ice Age. Opened in 1969, the church has become an impressive attraction and fixture for not only weddings and sermons, but also performances and music due to the acoustic qualities on the rock walls. A natural underground stream runs beneath the church, and grated holes run along the edge of the polish concrete floor which allow the sound of trickling water to echo throughout the building. Suspended in the roof is a giant coiled tape of copper, which hangs almost ominously above the congregations seating. The rich and varied hues running throughout it gave a sonorous quality to the ambience of the room, yet I could not help feel all too aware of the shear weight of the disc right above my head. This feeling I think mirrored may of the design choices on the church, including the thin struts which held the ceiling up whilst allowing for the most light to enter in, and the gap which ran around the entire room separating the floor from the walls. These choices I believe subvert the idea that modern architecture remove humans from the dangers of the outside natural world. Temppeliaukio is an extension of that world, one we have survived it far longer than we have been living indoors, and where our bodies really feel more at home.

That afternoon I took the underground Metro from Kamppi, discovering more interesting ways in which design and nature collaborate in Finland through these artworks of city signposts presented as subterranean crystalline growths. Helsinki has only one Metro line, shaped like an upside down tuning fork, splitting at the last few stations. I headed for Hakaniemi Station, and onto the Theatre Academy part of the Arts University of Helsinki. There I met with artist Kira O’Reilly, a London based internationally renowned artist known for her ‘movement works’ which investigate movement and embodied thinking, who currently teaches an interdisciplinary course on Ecology and Performance at the academy. I was interested to talk to Kira about what I gathered was a strong advocacy for interdisciplinary practice in Finland’s educational system, and the biophillic relationship between nature and society which seemed ever present throughout the city. I knew from prior research before arriving in Helsinki that Finland had just been voted the happiest place to live (four of the top five being Scandinavian countries at the time of writing), and wondered if this was all connected in someway that an outsider may be able to attest to first hand. Kira replied that in her experience this accolade actually made most Finns quite unhappy (an observation that I found was repeated by others throughout the journey), as generally Finns do not like to be in the spotlight and are quite a modest people. Nonetheless, Finland boasts an impressive work and family lifestyle, progressive policies, and good economy, but it seems that actually the root of this happiness is in a quiet sort of satisfaction with life, something which I would argue is linked to the interdisciplinary mindset of its citizens. 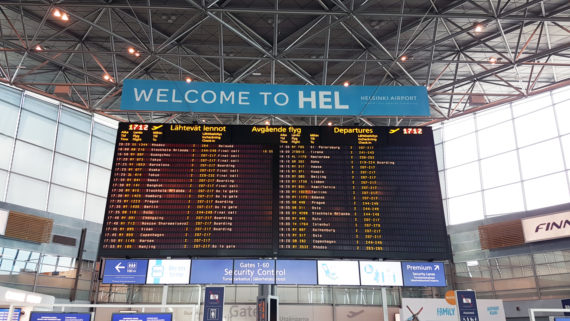 I continued to ask Kira more about the course she was teaching and about her own continuing artistic practice. Having run for the last two years as a pilot MA degree with the University of Arts Helsinki Theatre Academy, the Performance and Ecology course consists of small student groups, with an aim to explore different forms of performance stemming from the partnership of arts and science practice to try and answer some of the pressing ecological issues of our time (issues of human, animal or climate threat) . Kira surmised her philosophy of creating work in the maxim: ‘Pressure and constraints lead to tension which create velocity.’ Such a formula seems appropriate to Kira’s previous teaching in both performative and time based art at different Universities world wide. The meeting was transformative for my limited understanding of performance practice, and Kira introduced me to many of the theories around embodiment; how our bodies are disciplined by the environments, buildings, and spaces they live in; how the body is always in a state of flux, comprised of a series of biomes of different species of organisms, known scientifically as a holobiont (assembly of taxonomies); and how the body may be extended, and where these extensions may end (at your feet, a chair, the sky or floor?). Most interestingly for me was the idea that materials themselves can perform, that the a human body is not necessary. This I believe evoked an underlying desire in my own sculptural practice, especially in my use of living material such as bacterial cellulose and slime mold; the frustration of breathing life into an artwork inflated more so where the piece is already physically living. Where living materials can seem dead, and dead materials can be animated said a lot to me about humans basic distinctions between the animate being living (simple robots seem sentient when performing basic scripted movements), and the inanimate as being dead (many sessile lifeforms are treated with little to no consideration because they do not move such as coral and sponges, but there are also organisms which we do not perceive as moving because they are too small to observe, or even larger organisms who have lost the ability to move through medical conditions eg: coma). I asked Kira if she considered herself a bioartist, to which she replied that she did not, but sees herself more as an artist part of the bioarts world, a position which I felt I could relate too, and she provided me with a list of other thinkers such as Scott Gilbert and Adam Zaretsky, “who so enthusiastically invites consideration of aesthetic possibilities via the newer technologies being accessed by artists, biohackers and scientists.” All in all Kira presented to me the idea of the bioartist (or artist part of the growing bioarts movement) as one who questions censorship and who is critical of biological scientific studies ethically and aesthetically. Most poignantly though, possessors of a “moral inventory”, which speak up for non-human as well as human species in turn. I left Kira and the Theatre Academy and headed for what I had been lead to believe was the best burger in Helsinki just around the corner at Cafe Talo, which is worth the visit if for nothing else other than the Twin Peak inspired bathroom,  playing the iconic opening theme exclusively on repeat.

That evening I arranged to meet with Erich Berger, director of the Bioarts Society, at Myymälä2 gallery back in the Design District. Speaking at an event hosted by the University of Arts Helsinki Theatre Academy were activists John Jordan and Isabelle Fremeaux from the ZAD (Zone of Defense), a 4,000 acre area of wetlands near the city of Nantes, France which has come to be populated by farmers, activists, squatters, artists, and hundreds of other people of different collectives who have built homes and buildings on the land in protest of a proposed airport since 2009. The talk complimented a workshop John and Isabelle ran for the MA Performance and Ecology called ‘Think Like a Forest’, which blended art, science and activism to explore how art can be used as a tool for creative resistance and not simply as a symbolic gesture. John and Isa’s belief is that we have become “violently separated from the world we live in”, and are in the process of losing the knowledge to grow our own food, build our own houses, and to heal ourselves. In the past they have peacefully demonstrated using disobedient bike rides, and also used the destructive power of nature to destroy computer circuits in banks who fund fossil fuels using ants. Together they co-founded the art activism and permaculture collective The Laboratory of Insurrectionary Imagination which brings artists and activists together to design tools and acts of disobedience. Their most recent endeavours focused on the ZAD, and its development into a hamlet governed by the people who choose to inhabit it. What started as a Climate Camp in 2008 of 100 people protesting the building of a new airport on the land grew into a 40,000 person strong mission to establish a new way of life after having being destroyed by 1,500 police officers the previous month. The types of homes and way of life for different residents reflect their political diversity; communists use combine harvesters; antispeciests refuse animal domination; and primitivists who don’t farm the land. The talk ended on a note of hope for recent news that the French government had cancelled all plans for an airport to be built on the wetlands, but also a declaration that the ZAD had been branded an ‘outlaw zone’ which would undergo eviction. The ZAD stands for a way of living outside of capitalist living, trying to keep diversity alive by operating outside of the monoculture regime. The last quote of the talk by Allan Kaprow surmised the objective of everyone who was and continues to be involved in the project, “we may see the overall meaning of art change profoundly from being an end to being a means, from holding out a promise of perfection in some other realm to demonstrating a way of living meaningfully in this one.” (Essays on the Blurring of Art and Life p.218)

After the talk I had the chance to talk to Erich more about the Bioarts Society, what they are currently working on and future projects and opportunities to keep an eye out for. At the time of visiting The Bioarts Society had just finished an open call for artists, scientists, and other practitioners to take part in a field laboratory at Kilpisjärvi Biological Station in northernmost tip of Finland, above the arctic circle, called ‘Field Notes: Ecology of the Senses’. Outcomes from this laboratory are now being developed at the station until the 23rd September 2018. Together with this research station, run by the University of Helsinki, the Bioarts Society run Ars Bioarctica, where residency opportunities are provided each year, along with talks and exhibitions. Erich also told me that the society were at the time applying for a new space to run activities such as seminars, workshops and exhibitions. In late August they were successful in securing that space with SOLU Helsinki, a very exciting development and a testament to all the important work the Society has been doing in the field of bioarts over the last 10 years. For a relatively small organisation the Bioarts Society continue to commision and produce exciting, experimental, and rigorous work around the arctic climate and more, and I felt very excited at the prospect of returning when this space is up and running. At the end of the evening I travelled up to my accommodation north of the city in Vantaa, nearby Helsinki Airport, where in the morning I would fly to Oulu to visit the Museum of Art, and then continue by train onto Rovaniemi.