…is his real name. When I first spoke to him, over a year ago, I was under the impression it was ‘Moule’… which would indicate it’s French roots, however although those roots definitely exist it turned out his name is actually spelt ‘Mole’

With Lenny it took a while but then two themes emerged which now seem like a ‘drrrr how come you didn’t see that before’ thing. He talks about the life he always wanted, to be a market gardener, to work outside in the fresh air. The irony emerges that he was called up during the war to be a ‘Bevin Boy’ working underground in the mines. Not to make a bad joke out of it… but you can’t help thinking that a name like Mole is just toooo serendipitous for such an occupation.

His house is a treasure trove of things collected over the years; to the unfamiliar eye arranged in a somewhat haphazard way. No doubt this is not the case and I’m sure Lenny knows exactly where everything is. At one point during our chat his bird clock chirps in. It didn’t occur to me at the time, but on trawling through the material it stands out as a brief ‘NOW’ moment; less about recall and more about reaction. It’s funny and Lenny smiles.

Birds seem appropriate to his story. His love of the outdoors and the more functional metaphor of a canary in a coalmine fit perfectly. The plastic bird trill acts as a metronome though this piece. It may be harsh but I hope I haven’t missed the poignancy of this extract from his story. What I show here is only part of his story, but one that offers a window into his world.

Making these pieces I am acutely aware that they have to be snatches, an essence of a situation. Seen in the gallery context they will loop and compete with each other on the various monitors. I want people to be able to dip in and out of these worlds, taking away with them singular impressions but also an appreciation of the whole. 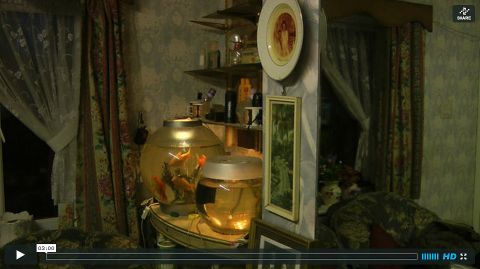 From Darkness into Light