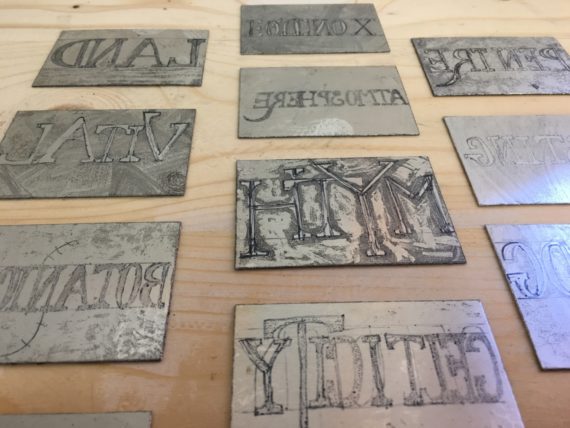 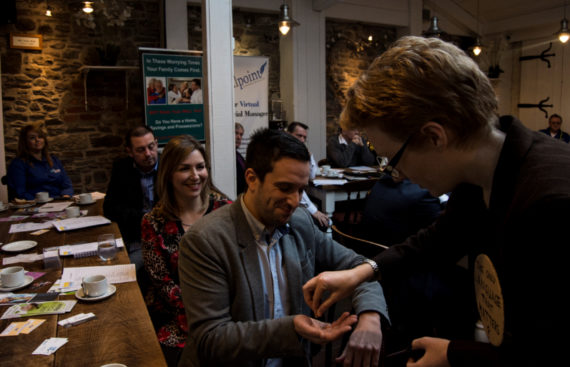 Early one February morning at Abergavenny Morning! Networking meeting, attendees have 45 seconds each to introduce themselves and their businesses to the 40+ people in the room.

When my turn came around I introduced myself and photographer Jane who I’d invited along and removed my scarf revealing a large cardboard badge with “The only language that matters?” painted on it.   Approaching the nearest table, I began handing out large round seeds from a black drawstring bag.

Jane began photographing the exchange as I made my way slowly around the room and with only a few seconds left I asked the room if they knew what type of seed it was and then revealed its name.

I was later asked Do you think honesty is the only language that matters?  To which I replied Yes.

Taking art into a business networking context.  I’m considering alternative ways of showing art, my art in particular as this is a context I’m experimenting with.  With my work being about people, communication and words the networking context is an intriguing situation in which to place it.

My way of reading is to have several on the go at any one time.  One recent read I’ve had for a while and read a few years back, though I read it the wrong way for me – front to back straight through.  Sometimes this way of reading satisfies, but more often than not the authors style gets repetitive.

My most recent read has made me feel more comfortable than ever in my reading style, which is naturally messy in reading a chapter that catches my eye for as long as its engaging.

This is a little in the way in Drawn Together  http://drawntogether.wales/index.php/about-the-project/– people are asked to draw something that catches their eye.  I read this way…How would you describe how you read?

The book I’ve just read (and keep dipping back into) is A Perfect Mess – The Hidden Benefits of Disorder by Eric Abrahamson & David H. Freedman.  It’s a great antidote to the very popular minimalist movement that sometimes gets less than pristinely ordered people feeling lacking some magical quality.

It nicely explained why towering piles of paper work better for me than folders, that stuck with me!

Which (unintentionally) brings me back to INSCRIBE – I’ve written  a proposal for it and would like  it to tour and shed sheets and accrue new transcriptions from a range of artist critiques – meetings – symposia perhaps.  I am on the look out for paper and photocopying sponsors to make this 1m high pile of paper entirely of paper next time, rather than plinth and paper.