It’s been such a non-stop few weeks that I have got a lot of catching up to do with this blog!

The last month in a nutshell: Made in Korea opened at The Ceramic House, with a wonderful, buzzy, well-attended private view, immediately followed by the first weekend.

A bit of background about AOH. We are one of Brighton’s Artists Open Houses and the model is to open for the four weekends of the Brighton Festival. It is the longest running Open House organisation in the country and is divided into groups, by area. The Ceramic House is in Fiveways, the original trail that was set up over 35 years ago, so it is well-established. We usually attract between 150-200 people per day, many of whom have been recommended by previous visitors to the house, or people have even told me that The Ceramic House is literally ‘the word on the street’, with people hearing it mentioned as the go-to place, which is quite wonderful. The Ceramic House reputation extends far and wide!

Following a hugely successful first weekend, we shot off to the opening of the Venice Bienniale, to get back just in time for the second weekend, which was, again, busy, and full of delighted, interested visitors.

On the Saturday evening, we were out when I got a phone call from UK border control. Jin Kim, one of the Korean artists coming to do the residency, had been stopped at customs and interrogated. They kept her for a couple of hours whilst they contacted me and decided whether she was ‘allowed’ to stay in the country! This is outrageous and totally unnecessary. If this is a portent of the new immigration policy then I am disgusted and worried. South Koreans are allowed to come into the UK for 3 months, I believe, and do not need a visa. Why they picked on her I do not understand. The poor thing was forbidden from answering her phone (I kept trying to call her to reassure her, once I knew she had been detained). Eventually after deferring in a most subservient manner (as one must do to a figure of power and authority), I managed to persuade them to free her. Oh Britain.

Gerry Farrell, the director of Sladmore Contemporary (where the exhibition will transfer to in July), came to visit the exhibition on the Sunday and was genuinely thrilled and is obviously excited about having this collection of gorgeous work in his gallery. A great endorsement.

Then Kyung Won Baek arrived back from Germany (where she had gone after the private view), and we made preparations for our site visit to Stoke on Trent and spent the rest of the week there – Joseph Young, the Koreans and me. Barney Hare-Duke, the director of British Ceramics Biennial (BCB) had organised an itinerary which involved a whirlwind tour of the potteries, taking in the Wedgwood Museum, Johnson Tiles Factory, Burleigh Pottery, Emma Bridgewater and a site visit to Spode Works. We saw the space that has been allocated for our installations in Spode – crucial in terms of planning what to make for it.

Additionally, we visited Airspace Gallery, which is run by an a-n colleague of Joseph’s, Glen Stoker, where we also met Phoebe Cummings who is making an installation for BCB (looking forward to seeing that). Joseph recorded the sounds as we went around Johnson Tiles and is so pleased with the results he is now planning to include them in the work he makes for the sound aspect of the project, which will include a concert by the UK-based sound artists for the opening weekend of BCB. Joseph selected the sites for the geo-locative mobile phone app featuring sounds by 3 UK and 3 Korean sound artists that will be launched at BCB and has finalised the line-up of all the artists now. Hankil Ryu, our Korean lead sound artist, has sourced the Korean artists.

We also crammed in the Potteries Museum and Gladstone Museum, so the artists got a very good sense of the history of Stoke and the pottery towns and also an insight into new developments. There is definitely a feeling of change and optimism in Stoke-on-Trent at the moment, although I may be looking with my ceramic-tinted glasses on, as it’s easy to think that BCB is having a profound impact on the fortunes of Stoke because it’s gaining traction and is becoming an important event, but not only that – the bid for City of Culture is also buoying enthusiasm. Good luck Stoke!

Again, we arrived back from Stoke just in time to open for the third weekend. I finally got hold of the last box from Chun Bok Lee, whose three boxes were separated and ended up all having different journeys through detention at customs (a bit like Jin Kim) before finally being released. The customs fiasco lasted for nearly a month in the end but I actually manged to get every box cleared without having to pay any charges. Chun Bok was very late sending his work anyway, so he is partly to blame! 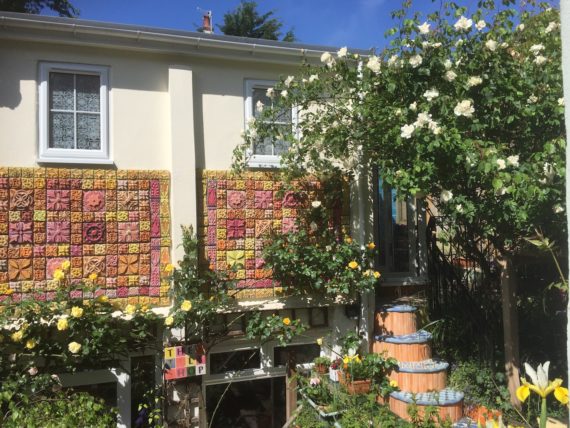 As a result of all these trips, we only had one week here during May so we crammed a few festival events in and then the final weekend was upon us. By that time, the garden was looking absolutely spectacular with the roses in full bloom (I’ve got loads of roses, one of which is a 65 year old tree and they come out in perfect timing for a May exhibition) and with the sun shining, the whole house and garden really does make for a visual feast.

The exhibition was our most successful to date, in terms of sales, standard and selection of work and how it was curated throughout the space. Our little white cube In Camera Gallery provided a totally different feel to the rest of the (very colourful) house, with only white work displayed in there, including a fabulous installation of white mice by Wook Jae Maeng.

We ended the exhibition with a finissage (to borrow the term from our German colleagues, having been to not only finissages but even midissages in Berlin), which was a really special, lovely evening, with a good mixed crowd, a sizzling barbecue, free-flowing vine on a gorgeous summer’s evening. With the floodlights lighting up the external tiled installations, groups chatting on all four levels of the garden terraces and in every room in the house, it was a memorable evening indeed. We even made some final sales including selling out of one artist’s work completely. And not only that, the torrential rain forecast for earlier on just while the party was going on held off until the small hours. Hooray!

The Made in Korea show at The Ceramic House has now ended after a hugely successful month. Everyone who stepped through the doors to the Ceramic House was (variously) overawed, amazed, filled with delight and wonder. This is know because of the visitors comments to me and in the visitors’ book! It makes me realise how special and different it is to hold a show of this quality in a domestic space. People really do not expect it! Also the house is a wonder in itself and the month of May really brings the best out with the roses blooming, filling the air with fragrance and the garden with beauty. The sun was shining every single day we opened, which helped too, filling the house with colour and light. Thank you to everyone who made the effort to come and make it all worth while.

The exhibition opens at Sladmore Contemporary on 12th July.