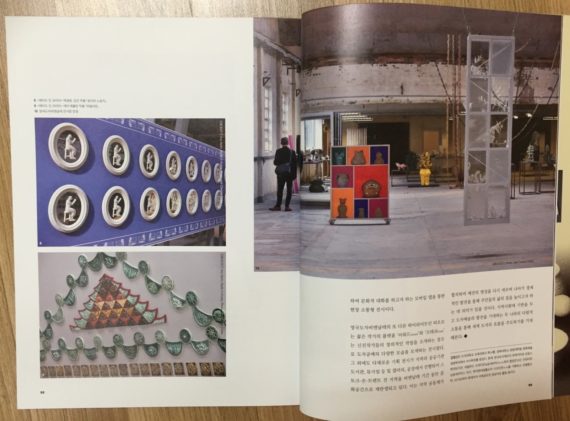 While Joseph and I were in Korea, we visited a ceramic fair in Seoul specifically to have a meeting with the Korea Ceramic Foundation, whom I had met at British Ceramics Biennial, as they were responsible for bringing the Korean artists over to work with Neil Brownsword’s Factory project. We thought it would be a good idea to meet up with them to find out about future collaborations, and we had an interesting discussion that may involve being involved in the lead up to the next Gyenoggi Ceramic Biennial (one of the most important ceramic biennials in the world, so that would be a result!). Anyway, we have to wait and see what happens there.

Whilst we were looking around the fair after the meeting, we chanced upon a stand selling Monthly Ceramic Art, the only ceramic magazine published in Korea. Joseph started flicking through it and lo and behold there were pictures of our installations at Spode Works, part of a lengthy feature about British Ceramics Biennial 2017. Very nice surprise! And lucky too, as it transpired the artists we were working with knew about it and had forgotten to mention it.

We are still waiting for the actual magazine to arrive back into my hands as we are currently wrestling with customs (AGAIN!). For anyone who has been following the blog, you may remember I had about 20 boxes from Korea held at customs back in April and only managed to release them through sheer desperation and dedication!

Well this time we shipped one box of tiles back as we were over the weight limit flying over and the check-in attendant was unusually nice and let us off with it. Now we are to-ing and fro-ing with customs trying to convince them that we have not bought the goods, they belong to us, it is artwork for an exhibition and not for sale, etc. Sometimes it is a pain not fitting into any of the boxes and they certainly haven’t thought of an eventuality such as art/exhibitions in their customs forms…. So hopefully we will get them to release them soon as they are now threatening to send it back to Korea!