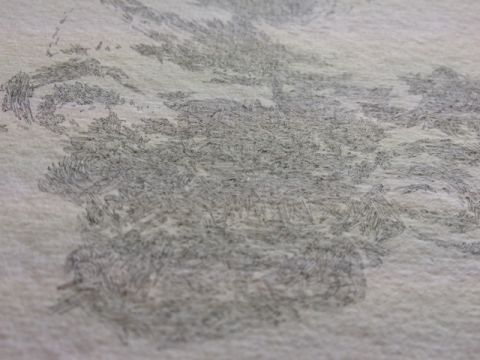 The North One TV film I was recently interviewed for is now online. It’s a nice little clip, featuring interviews with myself along with fellow Bow artists Bhajan Hunjan, Fiona Gall and the founder of Bow Marcel Baettig.

There are some brief shots of me making drawings for the ‘Autography’ exhibition, along with details of my fingerprint works. I explain the importance of Bow to artists with portfolio careers, as well as how sharing a studio with artists Lizzie Cannon and Elizabeth Murton has benefitted my practice. Check it out!

Well I wasn’t expecting that…!

Opened up today’s Guardian to see ‘Autography’ has made their Top 5 exhibitions to see this week. I’m obviously very pleased, not just for myself but for Gill.

It would be really interesting to know what she would make of it. How would she feel about making the Guardian’s ‘Pick of the week’? She rarely exhibited during her lifetime. Would the thought of such publicity horrify her?

It’s a very strange feeling to collaborate on a project with an artist without ever speaking to them. I guess it’s indicative of the strength of Gill’s work that I feel so close to her. Drawing is a different type of language and it has allowed me to connect with another artist 51 years after her death. I wonder whether someone will be doing a similar thing with my drawings after I am long gone…!

On another note, there was a lovely little article on the show written by Stephen Palmer for a-n News. There are a few quotes from myself and Rosamond, plus more info on the residency scheme as a whole. You can read the article here 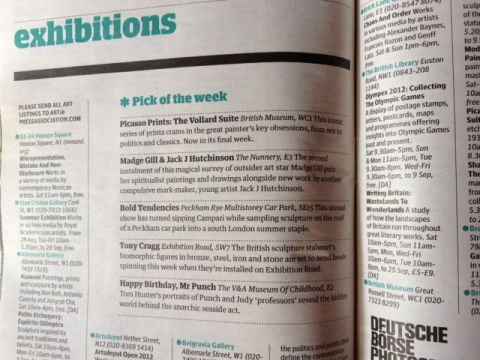 Last night was the opening of ‘Autography’ at the Nunnery Gallery. I had a great evening and received some lovely feedback on my work. A number of people were also tweeting using the exhibition tag #MadgeGill. Highlights included:

@RosalindDavis: “A beautiful and terrifying show. Compelling in its intensity and extremity. An Escher-esque quality of a maze of thought and action.”

@KipandFig: “Nice to meet you…loved all the work in the show.”

I have to admit I was incredibly relieved it was so well received. The last six weeks have probably been the hardest I have ever worked on a show. The 40 drawings I produced in that time were created in quite isolated and intense surroundings, and it was scary seeing them exposed to the public and under close scrutiny. I find private views claustrophobic at the best of times, and I always have my professional hat on (i.e. network like mad and don’t drink too much!) which makes it difficult to truly relax.

However, once I’d got over my initial fears I genuinely enjoyed the evening, particularly the number of interesting conversations with people I have great respect for. Historian Gary Haines, who has contributed research for the project, had some insightful things to say. Also, the Outsider art expert Roger Cardinal suggested I try drawing with my eye’s closed. Not sure the mark making would be quite as precise, but it’s worth a go!

Today it feels strange that the project is theoretically over. However, the urge to draw never really leaves and I am already thinking ahead to what I am working on next. I also have a show opening in a week in Terrington in North Yorkshire which I need to prepare for, along with lots of AIR and a-n admin to catch up on. Plus the ‘Autography’ talk with Annabel Tilley takes place on 19 September.

Lots to look forward to!

Day three of the installation of ‘Autography’ and everything seems to be going to plan. The first two days were all about cleaning up and preparing the space – you know, all the tedious stuff like putting poly filler in drill holes. I also had a trip to B&Q, which actually excites the same feelings I had as when I was 10 years old and on my way to Toys R Us.

To top things off I realised I needed to do three more drawings. Funny how things change once you are actually in a space!

There have been moments over the last 48 hours where I have felt physically and mentally drained. I always get like this in the last few days before a show, and I’m sure I am a real pain to be around. All I can say is I have wonderful friends and family who put up with it!

Anyway, today comes the fun part. Newham Archives are delivering Madge Gill’s work. There is the large scroll to be installed plus 14 framed drawings to hang. I will also be placing my 40 drawings on shelves around the large central space. The vinyl labels are (hopefully!) arriving tomorrow which is cutting it a bit fine but I’m confident we will be ready for the 6pm opening. 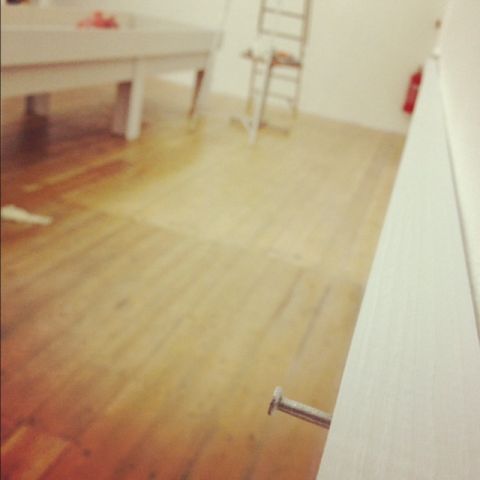 I’ve had a pretty inspiring couple of days. I was intrigued by a Twitter discussion started by AIR Council’s Rosalind Davis asking: “What motivates you to keep working in the arts?” I responded: “Creation. Growth. Success. Failure. People. Drawing. Insight. Beauty. New horizons.”

In many ways the list sounds like the synopsis for an awful Phil Collins comeback album (perhaps minus the drawing bit). However, I guess it really is what keeps me going. Particularly the bit about new horizons.

Moving forwards and advancing my knowledge and skills is incredibly important. However, I am learning that new horizons are often reached through looking back. Re-engaging with the past often sheds new light on future possibilities. If anything, this residency has made me think a hell of lot about not just who I am as an artist, but also as a person. I’ve confronted a lot of things that for a long time I was embarrassed about, but in fact have helped shape who I am today. And it all feeds into my drawings.

In the last couple of days I’ve shifted gears slightly and have speeded up my production pace. When I started the residency I was keen to push the ‘all-over’ action style inspired by Gill’s approach. I don’t know what happened earlier on this week, but the latest drawings have much more space and movement in them. I am making smaller marks, predominantly dots. Perhaps it is the result of repetitious exhaustion, spotting the finish line and loosening up a bit. Whatever the cause, the results are really pleasing.

I also had a cracking meeting with Annabel Tilley planning our talk. She is a real kindred spirit in terms of a passion for drawing and mark making. In fact, I think every drawer should book a tutorial with her! She’s pretty damn inspirational. 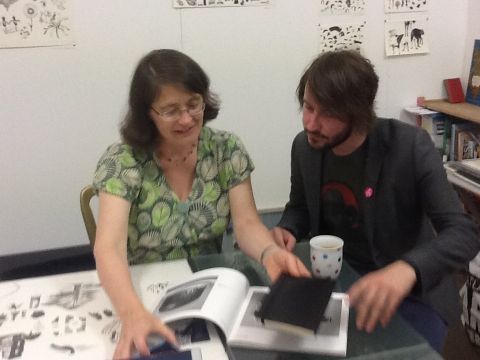