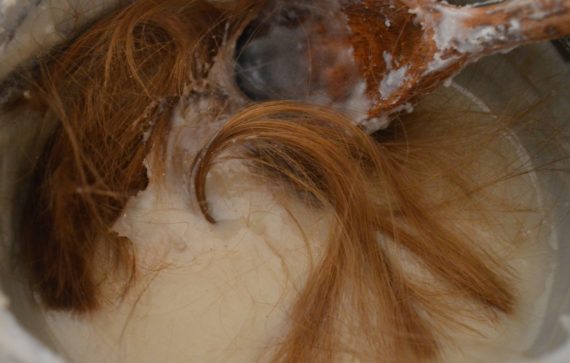 According to roman legend people discovered that cleaning their clothes in a certain part of the river Tiber would make their clothes cleaner. On the hills above the river there was an ancient burial site of animal and human sacrifices. Rainwater would run through the white wood ashes creating lye which when mixed with the fat from the corpses would produce soap which flowed into the river.

Lye soap has a similar aesthetic value to corpse wax, otherwise known as adipocere (a waxy layer of fatty discharge that forms a crust over a corpse sealed in an airtight container caused by anaerobic bacterial hydrosis). An age old example of this is a woman entirely cased in adipocere and named ‘the Soap Lady’.

With my work surrounding the genocide of witches, the easiest way to understand something with almost no documentation is to compare it with the Holocaust. A particularly horrific aspect that caught my attention was the issue of human recycling. Shorn hair taken from Auschwitz was repurposed into the textile industry, making socks and blankets for the forces and being used for car interior textiles for the company ‘Schaeffler’. Fat from the bodies in a death camp in Gdansk was repurposed to make lye soap, repurposed for cleaning autopsy rooms and examination tables.

After learning this, lye soap became such a relevant material for me. I made several batches experimenting with different types of fats and small bits of wax, mixing soap and my own hair to use as blocks for carving and casting directly into life casts to achieve fleshy and fatty results.

I have been studying crouched figures and the negative spaces they produce; spaces formed from curved stomachs, thighs, arms and breasts pressed together. I began carving these shapes out of wax and soap. Making the impressions of where the body parts would have been. Round bulges became hollowed voids and creases translated as sharp angles.

The shapes created, formed the impressions of bodies, as if their remnant. The fatty lye soap I was carving from had the quality of flesh and bone, of human remains.