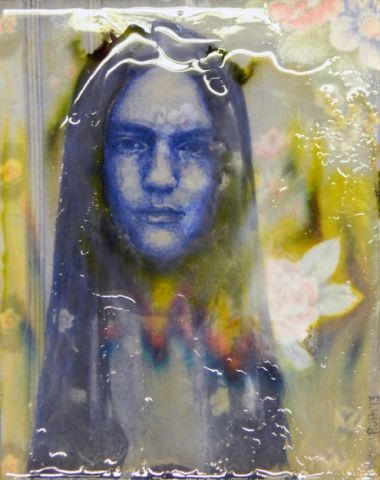 Absorbed in Resins and Pigments.

I had the most wonderful day in my studio earlier this week. I can’t remember the last time I felt so excited about my work! Completely immersed in process, I was too absorbed to boil the kettle for tea. One idea flowed to the next, with new pathways opening up wherever I turned. And yet again it’s the interaction between resins and pigments which has absorbed my attention completely.

Over the past few weeks I’ve been creating intricate cracked patterns which, when viewed up close, bear a remarkable resemblance to the cracked, dried mud patterns found in river beds. This has started me thinking again about the way that mankind persists in mimicking nature. As a species we are inherently contradictory; on the one hand we struggle to control and gain power over the natural world, shaping it to suit our needs, and yet at the same time we place nature on a pedestal, forever reproducing and recreating it for our own pleasure.

Think of the smell of a flower captured artificially in perfumes and air fresheners, pine forest bleach, artfully arranged plastic ‘blooms’ in a hotel foyer and stunted trees cropped to suit the restricted growing space of an urban street. Or look to the extreme example of The World; fake islands constructed in the shape of countries and continents and arranged in the shape of the world off the coast of Dubai. When I compare these man-made endeavours (which somehow always retain an aura of ‘fakeness’ no matter the skill of the craftsman) to the real, nature-made wonders of the world, I can’t help but notice that in general we seem to prize our own attempts at recreating nature above and beyond nature itself.

I’ve been contemplating this seriously ever since attending a discussion event at Arcade Cardiff last week. ‘Don’t Bite the Hand that Feeds’ formed part of the ‘Rising Tide’ exhibition by the artists Catrin Davies and Lewis Wright, Ingrid Schildermans and Matthew Macaulay. The premise of the show was essentially to consider/highlight mankind’s utilisation and replication of nature to suit our own ends.

As part of the discussion, a lady from the Red Kite Feeding Centre in Bwlch Nant yr Arian, Ponterwyd had been invited to participate. She helps to operate a feeding programme for Red Kites which has essentially ensured the survival of the species in the ‘wild’. This, as a result, has altered the course of natural selection for by providing regular food the principle of ‘survival of the fittest’ no longer applies. Injured and deformed birds now thrive alongside their evolutionally perfect counterparts. If the feeding programme was removed most of these artificially sustained birds would die as there are insufficient natural food supplies to sustain their population.

This interests me greatly for it illustrates the full extent of man’s hand in nature, and that how even what appears to be commendable and ‘natural’ on the surface has been shaped by our input. Even the hills and fields of the ‘untouched’ countryside are unnaturally green and shaped by generations of farming.

So I guess my resin experiments fit comfortably into this theory, for at the moment the outcomes seem to be the creation of a superior, technicolour mimicry of nature. My own tough, more robust Super-Nature. And somehow I remain captivated by this quest and powerless to move on.

I am an artist with a fascination for collaborative experimentation. Over recent years I've worked with a polymer chemist to discover ways in which industrial resins may be used as painting mediums. I've also collaborated with the London Science Museum to explore science as a means of making visual art. My aim is to discover an unexpected aesthetic and untapped potential through a process of experimentation, trial and error.