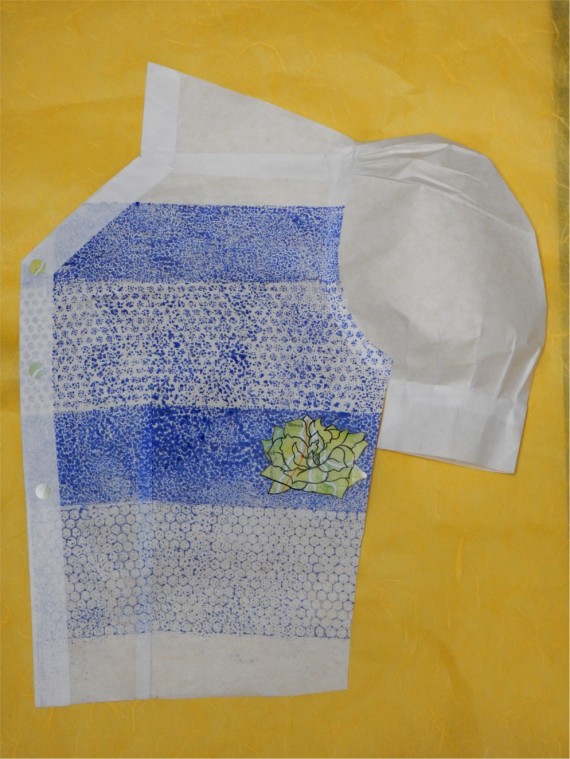 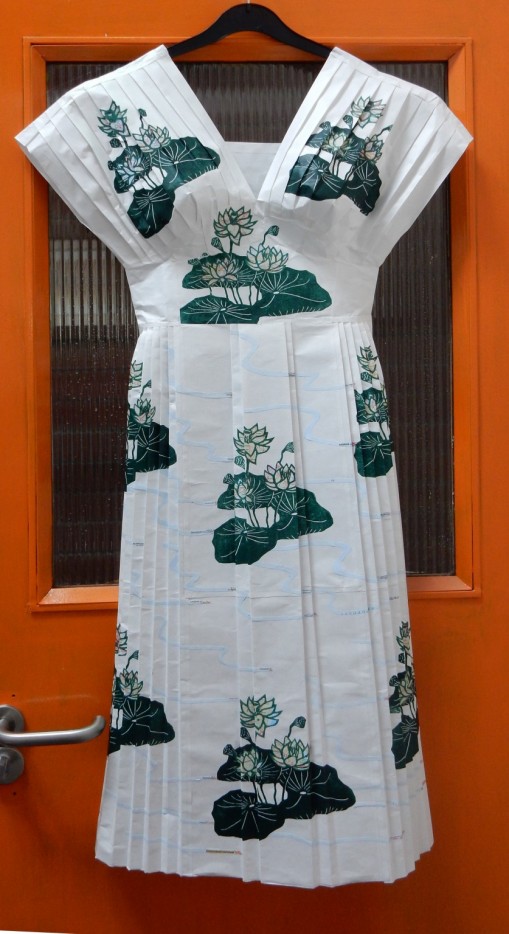 The lotus dress is complete at last. Hooray. I found it much harder to make than the map clothes I made a few years ago. Not sure why. More complex design? Fear of spoiling pristine white paper, whereas old maps are already fairly filthy? How time consuming it is to fold paper; the maths and the practicalities? Is it a really a bonus to work on a model rather than make the clothes flat on the table? I certainly allowed myself to be distracted from working in my studio rather too often. Walking with Wolves on Newton Fell in August for example.

Only 7 more clothes to go, and I hope I can speed up. I have decided to work on the marigold dress next. The marigold is the state flower of Gujurat. Many Gujuratis went to Kenya and Uganda and then had to leave in 1968-73. So I will be using the Kenyan and Ugandan maps for the marigolds – though I may use some of a Gujurat map if I run out of Kenya and Uganda.
The fabric design is somewhat driven by the size of map. I decided to make a halterneck shiftdress. So I made a rough design on the model (not Jolene anymore) and placed 4cm circles on it. That is as many circles as I can make from the map – (times 2 for the other side). As a result of that test I decided to use 2cm circles on the bodice which gives me a few more.

What could a marigold look like for a swinging 60s dress? Time for a free scribble. Then I had to weigh up what I liked against what I could achieve by either paper stencil or lino cut. The lino cut flowers will be printed on the map and then cut out. The paper stencil will be used for the leaves – and instead of making screenprints (as I do not have a screen and Artlab has closed) I will use a decorator’s roller, acrylic paint and a paper stencil. That experiment worked and the painted paper still folds.

Colours are go – I can’t stand the terror of working with white anymore. The late 60s and early 70s used a lot of bright colours, but just look at the map! I will have choose something a bit more subtle, and opt for unrealistic colours, which is also OK for the period – mid blue back ground and navy blue leaves perhaps.