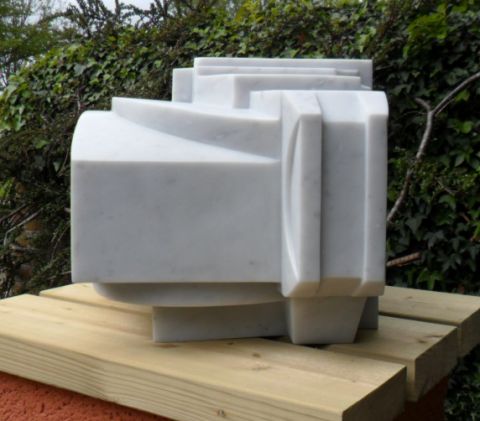 It was with a profound loss I heard today of the death of Antoni Tapies. I still remember that ‘shock of recognition’ when I first saw Tapies’ work back in the 60s. Very few artists have ever offered MATTER in their work as well as Tapies. Nor, I feel, has anyone succeeded in giving matter such completely embodied resonance.

There have been few modern artists who have made a commitment to the actual material like Tapies did throughout his career, and at the same time succeeded in establishing a subtle and complex set of values through the work. Tapies was, in the main, an abstract artist, and his work struggled into life on the boundary of becoming inarticulate. There was no formal language through which to convey what he sought to evoke, and art’s various historic strategies failed him too. For me he was one of the few artists to have ever gone directly to matter to find meaning, like those early abstract artists who saw the religious possibilities that lay in abstraction. Unlike them, however, he made the spiritual available to us through his manipulation of material, not through ‘design’ or composition. Arguably he refused structure and form, and their artificiality as meer arbitrary choices on the part of the individual. Formlessness was never so wonderful!

Hints of meanings were also often strewn across canvasses – abandoned letters, symbols such as crosses, etc. It seemed that the ‘meanings’ here were too evanescent to quite take form, and perhaps like Cy Twombly, he seemed to do more on the edge of this formlessness than could be achieved by any kind of definitive shaping. My love of his work depends, though, on the meanings he seemed to have etched out of inarticulate matter, refusing as an artist to offer meaning as separate from matter – no dualism here. 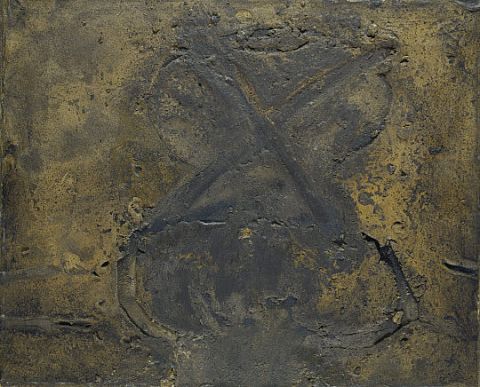 I’ll put a couple of my own pieces on the record in order to raise some issues that may remain prominent.

One of my main interests in Modernism arose, I think, when as a youth, studying art and literature, and with an interest in philosophy, I developed a sense that impersonality and a certain detachment counted for a lot in these fields of activity. It seemed to me that the great artists and writers of the time (the first half of the twentieth century) were fundamentally trying to achieve a kind of objectivity in their work. The work itself could be personal, in that it came from an individual, but it also rose above the limitations of the individual self. In fact, the art I seemed to come to admire may even have aspired to greater things, or to be associated with greater things, such as Giotto’s or Michelangelo’s works were once associated with religion or, in the nineteenth century, Cezanne’s work was seen to be foregrounding new ways of seeing and of working. These artists did’nt depend on the personal for the value of the work, even though, as individuals, they all contributed to the development of art in a highly individual way This was art that saw itself as, shall we say, ‘profound’ and no mere ‘expression’ of an individual consciousness.

So, I see some of this in the early history of abstract art, with the strenuous emphasis that was put on religious feeling, with art as a vehicle for this. We might name Mondrian, but then we could name almost any of the early abstract modernists.

The two pieces represented here are both carved in this spirit. I like the impersonality and detachment – the work is not directly about me, and the forms, if they work, are almost entirely non-objective. The pieces are, in that sense, cold, even pristine. If anything, it is a stepping beyond the self that drives the pieces, not expression of it.

From a Forum topic named ‘Should the ‘meaning’ of a work of art be obvious’ I am including this post I made as it relates to the whole modernist issue.

A couple of issues interest me here. There was a time, let’s say medieval Europe, when the ‘meaning’ of a work of art was clear. Art’s function, in mainly religious, decorative or illustrative terms, meant that the audience, from that social context, would have no problem of understanding. Patrons saw to that cohesion through their wealth and power. These broad social, cultural and religious contexts have gone, and so has the ‘authorisation’ of the work by a central social body or hierarchy that speaks for the community and hence keeps art generally intelligible to all.
With the loss of these old ‘authorities’ and the development of ‘modern’ rationalism, science and new political ideas about individual freedom from oppression and authority, the audience of modern art finds itself in a very different relation to the artwork. If there are as many artistic responses to the same thing as there are individual artists to represent it, then it could be difficult for many people to quite understand what any one artist is advancing, particularly given that stylistic innovation, whereby the individual artist asserts his/her individuality, has become as important as ‘content’. So, we move from the medieval icon maker to Picasso to Damien Hirst (all different in content and style), and if we are to understand any of these new guys then we may have to recognise that art may no longer be so easy. It just might be in a foreign language!
Added to this is the crisis all modern artists face: what do modern artists think they have that is so worth communicating? If it’s just ‘feelings’, then OK. If it’s just someone’s point of view, then OK again. But when it comes to ‘MEANING’ we develop a whole new problem. In the 13th century meaning was not a problem, in a sense. There was a social, sociological and religious superstructure that established all that. Society had a certain cohesiveness (brutal as it may have been for many). And art served that. Nowadays, unless one is involved in the decorative arts, the ‘serious’ artist may turn out to be too difficult to understand because his actual audience could be much, much narrower than his potential audience. Cezanne was appreciated by only a few for much of his lifetime; his radical perception of how paint made him ‘difficult’ for some. Why? What he was doing was advancing something new, not just in terms of how to paint, but also offering a new theory of vision almost. Now you might ‘get’ all this when you look at a Cezanne, but maybe not. Again, why? Because you may not see art in the same terms or you don’t understand the terms of the debate.
Having said all that, I see no reason why anyone cannot understand any work within their own cultural milieu, with a little effort and aesthetic sensitivity. The problem today is that almost every artist attempts to create a milieu that is complete unto themselves – it seems to be a point of principle that we are original unto ourselves, and given that, also be ‘DIFFICULT’. At the same time, in the modern world, ‘meaning’ itself has become difficult. Science has seen to that, as has the loss of faith and a billion voices all saying very different things. Who’s to know? The artist? And if he does, how can we tell if the ‘stylistic’ language he uses isn’t one we quite grasp?
All the arts are difficult now. That’s the way it is. I know of no good modern poetry that hasn’t got the same dilemma……

Will Self on David Hockney as colourist

Some time ago Will Self, reviewing a Hockney exhibition in London, spoke of how he (Hockney) was a poor colourist. For a moment I was taken aback – this was something I hadn’t considered before.

With the new exhibition in place in London, I wonder what anyone thinks of this comment by Self. Personally, having revisited Hockney’s work with this point in mind, I’m inclined to see Self’s comment as a misunderstanding on his part. I have always seen Hockney as a child of the 60s artistically, and the colour sets he uses seem to me, on reflection, to be a ‘pop art’ pallette. The trend in the 60s towards vivid, clean and commercial colour schemes resulted in much that went on, personified by the work of Andy Warhol, but also in Britain by Allen Jones and Peter Blake.

Hockney’s colour sets have a distinction that is all his own – I can tell a Hockney at 200 paces just by the colours alone. And I see his commitment to this palette for much of his life as a commitment to the possibilities of paint, of life seen through the eye of a modernist artist.

And despite the variety of material he has adopted as subject matter, the artistic commitment has been to a non-tragic, non-representational set of colours – no gloom in the work and no realism either. Some jarring colour relationships seem to part of the aesthetic, and perhaps part of how we see colour relationships now too. Gradations of colour and tone are also simplified, again perhaps echoing that 60s background where impact was all. 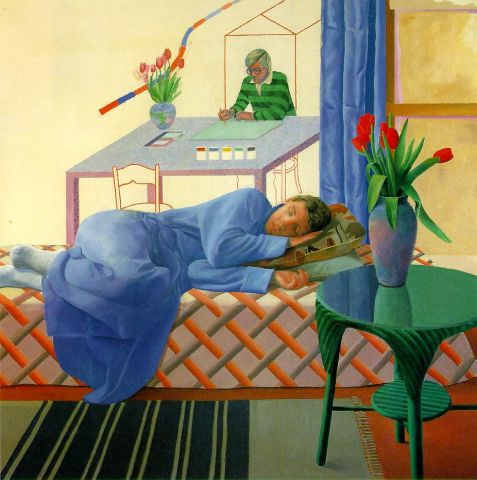