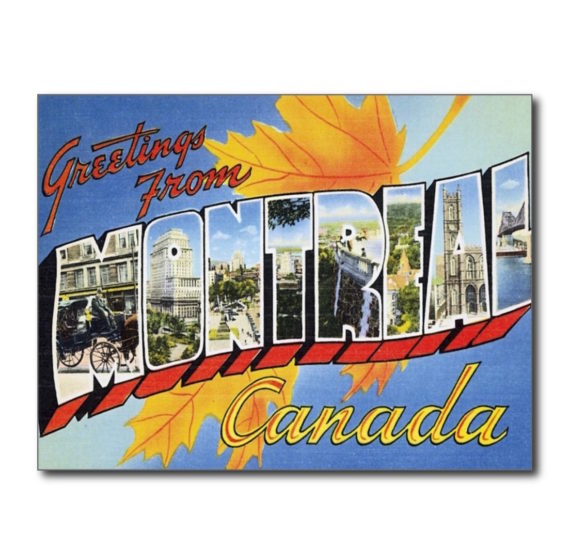 Saturday 22nd October: My last day in Montreal. Time to firm up plans with Catherine, and take a much-needed ramble around Montreal to get a wider sense of the city. It’s been a whirlwind of meetings and visits to galleries, studios and museums, so it feels appropriate that on this rainy day I set out to explore Montreal to look for WW1 memorials and find Aberdeen Avenue in Westmount, where my mother stayed as a child evacuee during WW2. The first place to head for was to be Parc du Mont-Royal. Mont Royal is a mountain in the middle of Montreal and is the city’s namesake. I was interested to see the WW1 memorials in the cemeteries there. Military graves at Mount Royal cemetery did not take significance until World War I, when Canada lost over 60,000 soldiers. After this event, the population of the city started to take public memory more seriously, and gave an entire section to war veterans and fallen soldiers. 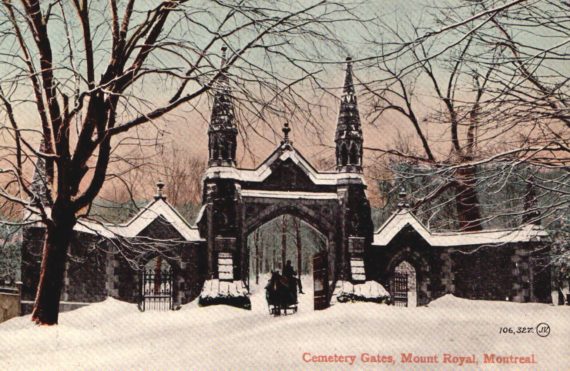 Before I set off I received an email from Catherine saying that Larry Silberman at Atelier Circulaire was interested in showing Cicatrix, but with a printmaking focus. This is exciting news and a realistic plan. We had a disappointing and frustrating time just before I left England because our plans to take Cicatrix to New Zealand had hit a wall due to lack of funding to transport the work. It seems that works on paper will be far easier to transport. It would also be an exhibition that included work by the three original British artists: Prudence Maltby, Susan Francis, Henny Burnett, and the three Commonwealth artists: from Australia Sophie Cape, Caro Williams representing New Zealand and Catherine Farish from Canada. It seems things are falling into place. I just wanted to pop into De Gaspe Complex to see the film Fit into the Crowd by Julien Robert, which I had glimpsed the other night but not seen in full. https://vimeo.com/21439269 It was a beautiful film about urban life that evoked frenetic super-saturation of the messages and images we are exposed to everyday. 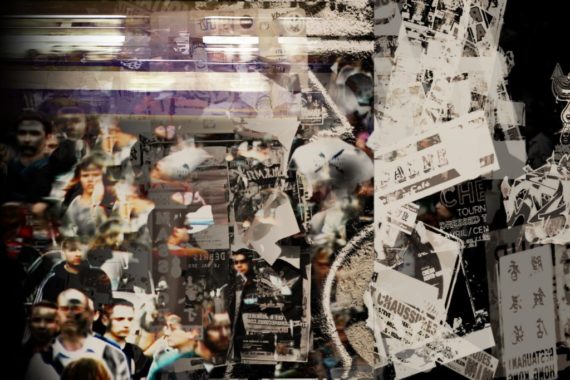 Still from Fit into the Crowd by Julien Robert
Between the Complex and Casgrain Avenue where I was staying, all the surrounding buildings are artists’ studios or galleries. The area reminded me of my time with Acme Studios in Carpenters Road after I left art school. (now demolished for the 2012 Olympics). The Plateau  Mount Royal borough is a working class francophone area. The largest neighborhood is the Plateau, which is undergoing considerable gentrification; it is considered one of Canada’s most creative neighborhoods because artists comprise 8% of its labour force. The neighborhood of Mile End in the north-west has been a very multicultural area of the city. It still has a large Hasidic Jewish community – a bit like Stamford Hill in London.

Buildings around Mile End
French is of course the city’s official language. It was strange to have crossed the Atlantic and arrive in a place that felt very European but with a slight twist. Montreal’s earliest buildings are characterized by their uniquely French influence and grey stone construction. 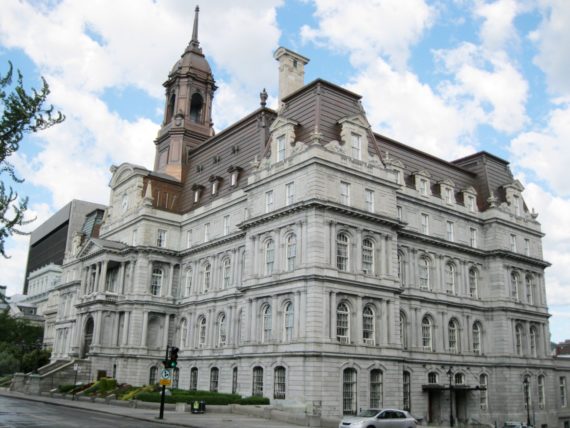 Montreal City Hall or Hotel de ville de Montreal
Then it was time to walk towards Mont-Royal. The neighboring area to Mile end was Outremont and in the small Parc Outremont I found my first WW1 war memorial.

WW1 War memorial Parc Outremont
Somehow we got lost and never found the Mount Royal cemetery, quite an achievement since it is such a large area. Very frustrating too not to see the WW1 graves. The colours of the trees were beautiful; I was seeing the famous fall. 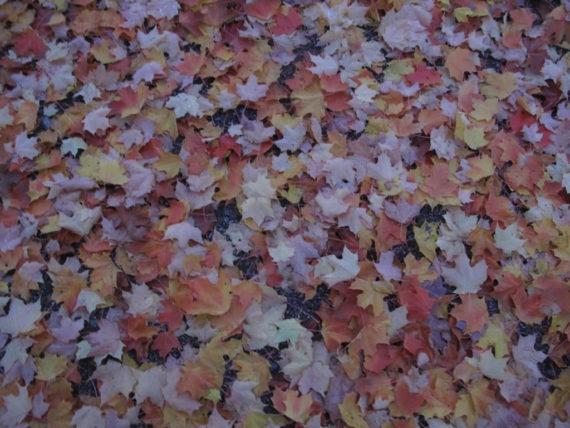 I did succeed in finding the house my mother lived in on Aberdeen Avenue in Westmount. Traditionally, the community of Westmount has been a wealthy and predominantly Anglophone suburb on theIsland of Montreal. There are streets upon streets of large houses, and in the case of the house my mother had lived in, rather ugly. The street names here are English. On walking through the area we did find a War memorial to those who had lost their lives during WW1 and WW2. I wore the brooch that my grandmother had given my mother aged 4 as she boarded a ship in 1940 to go to Montreal with her brother. They did not see their parents for five years. 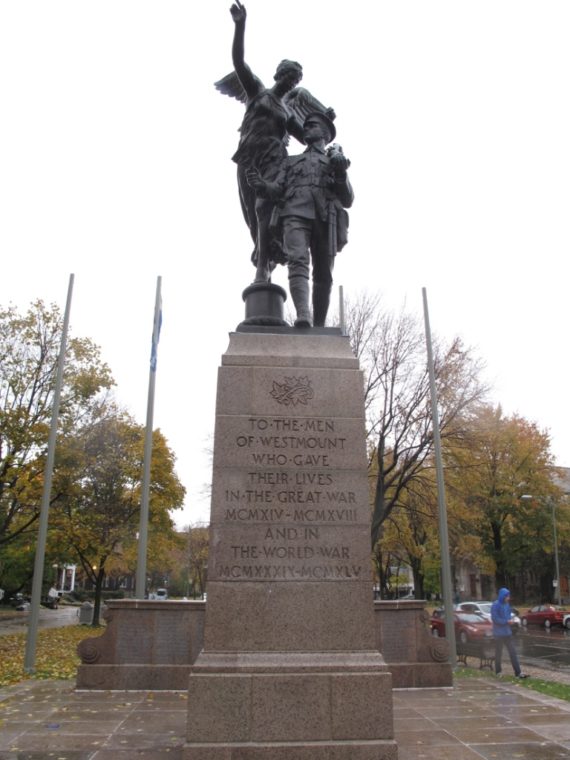 War memorial Westmount
Then it was a quick dash to the nearest metro to collect our bags and head off for our 10pm flight. I have a long to do list and all my findings to report to Pru and Susan on my return. The trip though short and intense achieved all I set out to do, to secure a Canadian artist for Cicatrix, Catherine Farish, and find a venue to exhibit Cicatrix in, Atelier Circulaire. I also will be contacting the director of Salisbury International Arts Festival about the possibility of exhibiting Catherine’s series of prints based on Stonehenge and Salisbury Cathedral that has never been exhibited in England. Meeting Catherine in person was a complete pleasure; she makes work of both beauty and substance. There were so many crossovers in the way we look and respond to ideas and visuals. I feel we have now achieved a strong international collaboration with the six artists for Cicatrix. This could not have been achieved without the AN travel bursary. It just highlighted to me the importance of meeting people, talking and discussing ideas, the links and connections that can be made this way. The Internet is a wonderful thing and has been central to the success of this project going international but it will never replace meeting people in person. As Catherine said in her email ‘I was looking forward to meeting you from a professional point of view. I wasn’t expecting that it would be so much more than that.’

Farewell Montreal, I hope I will return soon.

Born in London, UK, artist Henny Burnett currently lives and works in Bristol. Her work revolves around the small histories and stories of a particular place or object and the way these stories interact with the outside world. Her current practice reflects a fascination with both museums and the personal memorabilia we all gather, asking the audience to examine how we view such artifacts today. The process of collecting, cataloguing, documenting and display are all key elements in her working process. She works in a range of media that include casting, installation, collage, assemblage, photograms, light-boxes, projections and sound. Recent work has included “National Memory - Local Stories” a creative participation project lead by The National Portrait Gallery. The project explored how artifacts from museum collections can engage artists and young people in responding to aspects of The First World War. She was the artist in residency at The Rifles Berkshire and Wiltshire Museum in Salisbury. She is currently working on the collaborative project ‘Cicatrix….the scar of a healed wound’ and the inclusion of Commonwealth countries. Cicatrix is an ACE funded WW1 centenary exhibition that investigates aspects of WW1, memorials, scaring and the land. www.cicatrix.co.uk http://www.axisweb.org/p/hennyburnett/