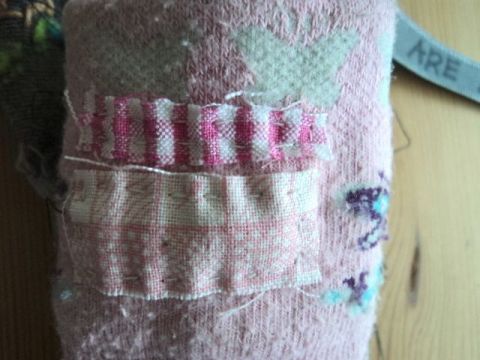 Sock B(6) after sockateer E (again)

Red beads added to Sockateer J’s bubbly embroidery, proving that I am that nutter on the bus.

Sock B now weighs 19g and including the packaging now weighs 56g. Length is left unchanged.

Sock B(5) has now arrived back from Julie Dodd (Sockateer J) complete with bubbly embroidery. Lovely, thanks Julie.

It weighs 16g now, length is the same. The package weighed 48g unopened.

I seem to remember Daniel and Sophie, that someone did some maths about where people sit when they get onto a bus… I’d like to say I read it in some complicated mathematical paper, but I fear it might have been on the American TV programme “Numbers”. Whatever calculations they did, might there be a way to use that on our socks? The theory being that as people get onto a bus, one by one, they evenly space themselves, then once all the double seats are taken, they then make judgements about who best to sit next to, for instance, women are more likely to sit with women, the elderly sit at the front, teenagers at the back and so on.

Sock adjustments then… so far we have spaced ourselves out, and not interfered with each other’s work, but then on the most recent sock A photo, I see someone has added to Sophie’s contribution. I have just had sock B back from Julie, and would quite like to add to what she has done, but feel it would be impolite, as there is still space for me to work elsewhere. Also, on this sock, people seem to be following the colour palette already in the sock.

If I encroach on Julie’s work, using bright pink, am I the equivalent of the nutter that sits next to you on the bus?

When my battery has charged I will add the new data and add photos of Sockateer J’s contribution. Thanks Julie!

At last a chance to get to grips with the dinosaurs…..

Sock A(5) will now be winging it’s (prehistoric) way to Sockateer C.

So this is sock B(5) that I have added to before sending off again into the world.

It still weighs 15g, and the measurements are the same.

The package weighs 48g now, as I have removed a piece of paper.

I shall post it tomorrow morning on the way to work.