I have gotten some new ways to display my books. These bookcases can spin !!! revealing space for more books behind the front panel. I have decided this will be good as a interaction piece. I am currently making more work to place into them.

I have deliberately left the dark brown case on a slight turn so you can get a better idea of how the bookcase works.

After a long await I am happy to say that I have finally got my new shelf, I have decided to place a few new books on it for now. The reason I have done this is because needed more floor space.

I feel that the two shelfs. placed in this fashion do complement each other. I also feel that the lighting in this space makes of a calming feeling when viewing the work and giving an overall more relaxing vibe to my work. 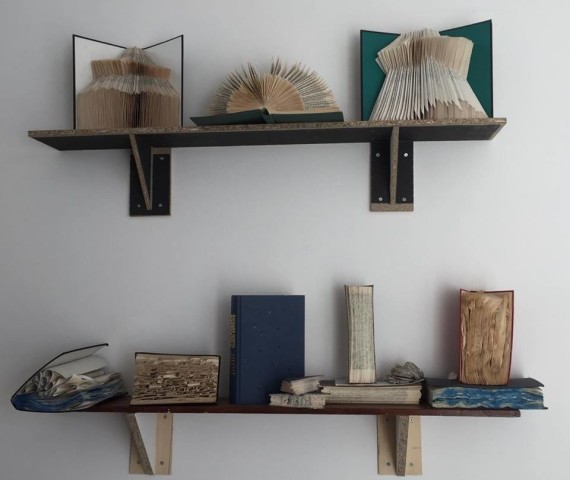 After a meeting with one of my tutors, we got discussing my work and how I have been very open in my account of how things happen.
We started talking about our differences to our feelings about books. How I would rather watch the film of a book, than actually go through the hassle of reading it. Where as my tutor would love to sit down with a cupper at the end of the day and read, she finds the whole thing relaxing and it is a part of her daily ritual.

This conversation got us onto films about books and she set me the task of watching a film, that she had seen and that she thought that I would like. The film was called The book thief. 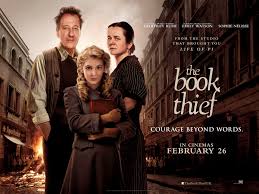 The film was set in the Second World War and is the story of a young girl who lost her brother travelling across the country, he dies in a small town and the young girl picks up a book that she thought was her brothers.

We soon find out that the young girl can not read, the story is about her learning and falling in love with the ability to read and write, the young girl ends up stealing books to feed her new found love of reading.

I have to admit that my dyslexia is not as bad as the girl in the film but there was parts of the film that I was able to connect with the girl. one of which is when she is asked to write her name on the bored and you can see the look of dread on her face. this is a moment i know all to well being asked to stand up and write on the board. I soon learnt ways to get out of this task.

I remember being in primary school, year 3-4 maybe. We had a substitute teacher come in on one summer’s day. This teacher wasn’t at all smiley and had apparently thought in a boarding school before she became a substitute teacher. (we still had chalkboards ever side of a white board at this time ) she cleared her voice saying I am Misses V. The class fell silent, with a feeling of tension in the  air, it was at this moment I knew it wasn’t going to be my day. she pushed out her orders in a very strong proper British accent, ( you know the one, the sort that is in old films, or when a American tv show gets an American actor to play a British person.)  Stand. Then Misses V, progressed onto a monolog about how we will all read 4 pages of a book, no exceptions and we are not leaving until we have all done this, we will then proceed onto writing on the chalkboard spellings until we get it right.

that was needless to say one painstaking hard days of my childhood. not to take into consideration the fact that i’m left handed and every  time i wrote anything on the board, my hand was rubbing it off. looking back on it i can see why she was properly getting a tad annoyed with me.

I have taken another trip to London, as I have decided to feed my love for the city. I Love to do this when I feel creatively locked in a narrow mindset, it feels like I have blinkers on stopping me from seeing any other option or possibility. It is nice to take a moment to step back from looking at the books and look for new inspiration in the most unlikely of places. I often find this release in photography as I like to capture the moments of things that happen in front of me.

Here are a few photo edits I have done, from my trip to the city.

The inspiration for editing the photographs like this, came from the thought of having a blinkered mind and only looking at a small aspect of a situation. When I was editing these photos I was thinking about when I was younger, I would only think about how avoiding reading was going to affect me at that moment in time. As I have gotten older I have seen the error in this attitude and I have started to try and compensate for this type of thinking.

This photograph was taken in London on a quiet road. I could not help but feel that this image would look better in black and white and I felt that, this was the ideal place to start when working on this image to reflect on my attitude on things now.