Maggi Hambling was mentioned during a tutorial with Jane 11/12/20 in relation to my sculptures of US from level 5 and CUBED. Hambling is a Feminist artist, she created a sculpture for Mary Wollstonecraft a British Feminist, who was a write and a philosopher, an advocate for women’s equality rights from as early as the 1700s to honour her. 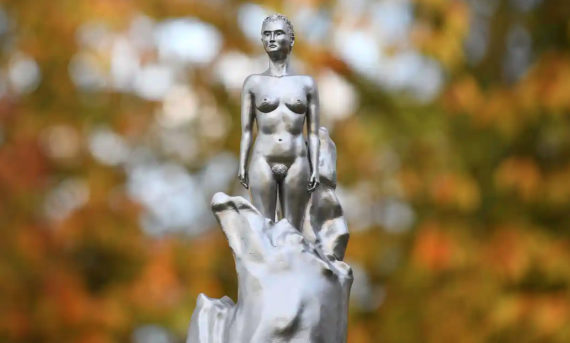 Her piece, A Sculpture for Mary Wollstonecraft, see above, caused a large stir and controversy towards its viewers questioning why does she need to be nude. People believed it was inappropriate for a public sculpture and “sparked a furious reaction” (Thorpe, 2020) Instead of a clothed sculpture, “she produced an abstract sculpture which features a small, naked silver woman” (Thorpe, 2020) who was attractive and toned – an idealised women, like how Mulvey explored the cinema screen to “glamorise” women for their looks. Is confusing what Hambling is glamorising/celebrating women for?

The nude female form on display suggested to campaigners that sexual objectification of the body was present and wasn’t respected, see below, they covered up the sculpture with a text shirt, leaving the head of the sculpture out in the open. 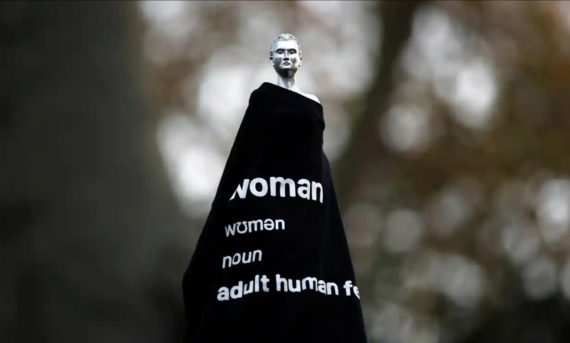 It is true that “many influential men who are memorialised with clothed statues in London” (Thorpe, 2020) and no men are displayed naked how Hambling has displayed Wollstonecraft. I am torn between what I think. Men weren’t congratulated with a sculpture of themselves naked so why should a women? Is there a time and a place for a nude sculpture? And was this one?

Wollstonecraft supported equality rights for women, in her book, “A Vindication of the Rights of Woman”, she spoke of how “women are told from their infancy, and taught by their mothers’ example, that a little knowledge of human weakness (properly called ‘cunning’), softness of temperament, outward obedience, and scrupulous attention to a puerile kind of propriety, will obtain for them the protection of man; and if they are also beautiful, that’s all they need for at least twenty years.” (Wollstonecraft, 2010 , p 13).

Wollstonecraft acknowledged how women were brought up to fulfil this role for their husband and how beauty helps keeps a husband and responded “how grossly they insult us!” (Wollstonecraft, 2010, p 13). Hambling wanted to honour Wollstonecraft theories and to remind the public of them how far women have come and still must go, but I am unsure if she has. Has she conflicted with Wollstonecraft writings?

Hambling argued “she’s everywoman and clothes would have restricted her. Statues in historic costume look like they belong to history because of their clothes. It’s crucial that she is ‘now’” (Dex, 2020) After reading this I appreciated the nude female sculpture’s presentation for the now but I feel that those who won’t take the time to research and know, will be offended and would an art gallery been more suitable? Or would it have lead to the same reaction? OR is she also trying to normalise the female form and reduce this sexualisation of the body by placing it in a visible place for everyone?

Reflection 19/03/21: These too were issues I was fighting with while creating my clay figures, even now creating icing breasts in film being consumed like To Bite – where could I display this?

In response to Hambling’s, I wanted to create a sculpture with a head, this was a comment from Susan to see how the sculptures changes with a head. I hadn’t wanted to but after my research I was intrigued to try it on a more natural looking female form, unlike Hambling’s use of a ‘toned attractive women’. 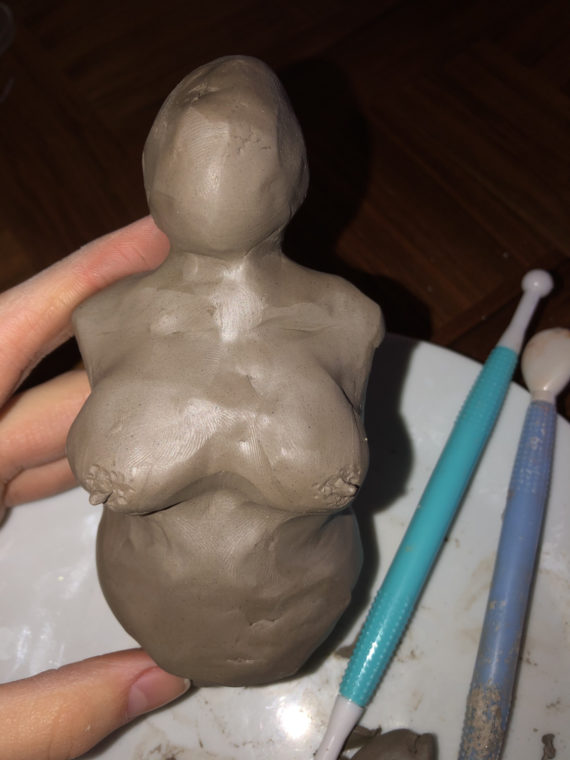 See above, I didn’t change my original opinion, I felt it gave the sculpture too much personality. It also did remind me even more of fertility symbol sculptures which is something I have decided I don’t want to pursue but must be acknowledged that there’s different interpretations, audiences and presentation. I still want people to see the array of body shapes and sizes, that have no face – feels more connected to the issues I am exploring.