From my group crit 29/01/21, following the feedback I got back into filming details, close ups and photographing areas to include in editing the final cut for the exhibition. See few  examples below. I tried to take these images in a similar position to where the filming is so I create a relatively clean transition from film to still, it gives the viewers a better and clearer image of the space/work that isn’t physically moving. I used key burns to allow the perceptive of the image to slowly move as the film progresses. I think will worked well in transition, see final film further down.

Reflection 03/02/21: I had a chat with Jane today and we discussed the blur tool between images doesn’t work – too distracting for the viewer, instead I will edit the images as a cross fade.

Reflection 03/02/21: A comment was made that there’s a confusion between what is film and what is stills. I liked this – I tried to film as steady as I could, ‘it works well with the use of transition from space to image’.

I wanted to focus on the islands display of breasts to explore this stained glass window approach/burst of colour that covers the breasts. I wanted the audience to question what the objects are at this point of the film. I hovered over the area with a steady hand and used a mixture of images, key burns tool on iMovie (where I will be creating the film – very easy to use) and film to create a mixture of perceptions of that one space/work as a taster of what is to come.

I titled the film Are You Watching? I wanted to promote this idea of cinematic/theatre relations to the work and women’s representation within the kitchen space. This was a comment made from my peers in my group crit 29/01/21 of this film, the recognition of the placement of a cinema follows through to my dissertation research: Metz, Mulvey and Lacan, there’s this sense of watching a film of women watching themselves, similarly to Sherman’s Untitled Film Still #2. The play on words of the work being a film plays to the audience watching on their own screens too. See the edited film below for the exhibition. The variety of angles, in-depths of focus and overall view of both the projection, colour and the clay breasts, helps show the exhibition, what it is/how it could be viewed if it was done in a different time before COVID.

Reflection 04/02/21: Jane brought to my attention the projection, where it had become pixelated on the wall. She questioned if this is something I like or not and we agreed that it works well with separating the projection and the sculptures apart, showing the viewers close that it is a projection – almost like the ‘behind the scenes image’.

Reflection 16/04/21: Having this experience has helped prepare for the exhibition proposal documentation/exploration, creating a space and capturing a space that viewers won’t be able to physically see.

I used the front image of the kitchen lights on, see screenshot below from film, showing the projection in a lighter setting with the clay breasts, it gives the viewer an idea as to what the space is prior to seeing the walkway of the film in the dark. In a 1-1 on the 03/02/21: Jane and I spoke about how this shows the viewer where they are about to enter/what they will see. As the image isn’t in the dark, it leaves the vibrancy and actual visual as a surprise for the rest of the film. 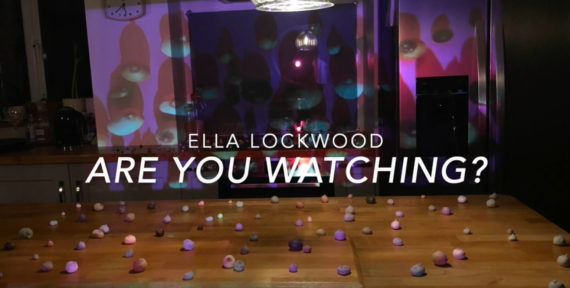 The opening name and titled was liked by my peers, (will be used for all) it helps separate our works from one another but still continues the similar path so there is fluidity within our group house exhibition. Everyone was really happy with this piecing of the film, it’s exciting as it’s finally all coming together! In response to my feedback from Jane on the 03/02/21, see notes below, I reedited the film with smoother transition to play around with different transitions for the film as explained earlier. 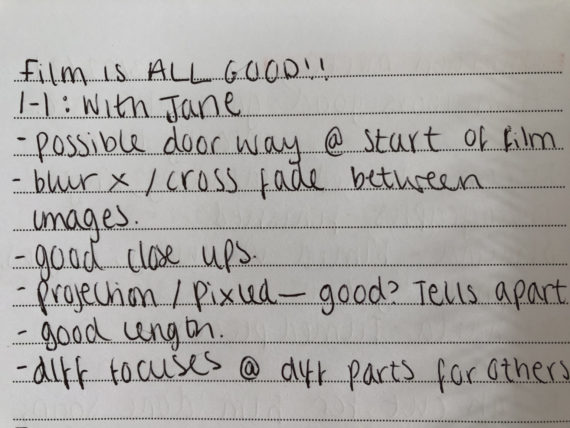 The blur I used was too distracting for the viewer. Instead I have used a ‘cross dissolve’ which graduates the film and images less drastically together so each cross over will sink into one another. I have also edited the last few stills so they don’t move so quickly with key burns so it slows down the film before it comes to a halt. There will be a playing around with the opening scene for the film but that will come together once I piece everyones films together – this is a whole new experience for me as I feel as though I have taken charge for the film editing of this exhibition.

Sound – I have carried the noise of the projector through the film as that is the sound you would hear being in the space. Helps viewers imagine they’re seeing it. See the final film below, this is my final film one that will be for the exhibition with The Art Station. I wanted to finish mine early so I can edit everyone else’s with a clear/continuous path in mind so the group film has a repetition and flow.