I pieced together the film on the 05/02/21 for my group and our exhibition followed by a group crit on the film. We’re still in need of stills/final films from everyone, but it was good to see these images/pieces of film together to get a feel for the final cut. See film below. I followed the pattern of how edited my film so there’s a continual flow/relation to each of our films, even though our work is individually different. It works well with combining us together with the imagery of the house/room too.

The stills between the films work so well – it gives a much better scope of the work/environment/details that may be lost in a continual film. The order of work flows very well and this was a comment made by all peers – good relation to the movement around the house/jump between works.

We then had a group crit on Friday 05/02/21 about the first draft of the film I created – it was really useful to get everyones feedback as well as get an idea of how the film will play. See initial notes below. Everyone was really happy with the first cut of the film, there are a few tweaks of actual filming for people to do but overall we’re not far off!

We have to think about the transitions between each person, it may simply work as a black screen between each other and a cross fade added which will the introduce our names and title of work. We are yet to finalise the info for the film. We need an intro to the exhibition and our reasonings for our group exhibition, credits, copy right, blurb with the collar with The Art Station and the university once we have all this information. Reflection 12/02/21: These have now been included in the film.

Reflection 12/02/21: We have also now completed our poster, individual posters for the exhibition labels, bio and group bio. See final posters below. I will begin to post these on my Instagram for our opening next week. Elgin created a few different styles we can chose to use for Instagram and other social medias. 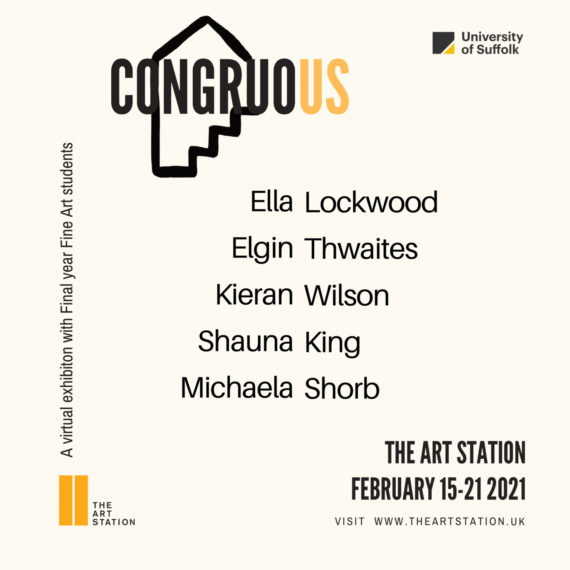 The bio was difficult as I wasn’t sure how much to add regarding my artwork and me as an artist. See my final edit of the bio and group text below for the website. 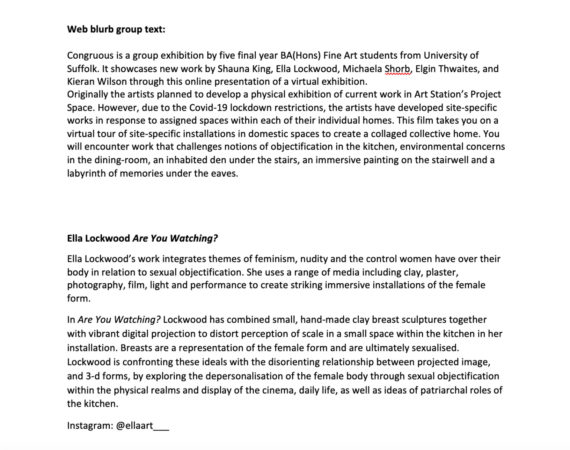 Reflection 12/02/21: I had a 1-1 with Jane on the 10/02/21 regarding the finalising edits for the film. It really helped to talk it through slowly and analyse it from an outside POV. See below, it has been very hard and intense but the editing is nearly there.

There were small tweaks to edit e.g. transitions, fades, information and titles etc which I have now finished. Still waiting on a few pieces to finally add in from my peers for the films of which I will have by today after our meeting, other than that we are nearly there with this film and ready for the the website and exhibition!

Reflection 13/02/21: I have now finished the film!! See final cut of film below, this is now ready for Monday mornings opening. I added the sound to create a background noise which include foot steps/hums of projectors for the film. It was very exciting and has turned out really well – I really enjoyed doing this editing of the film.