After my feedback with Catinca 12/03/21, I projected To Bite first at uni in my studio 17/03/21, but they weren’t as successful due to the bright lighting. I used this as an experimentation, using the walls to create different perspective of the film. I centralised the film in the hollow box to add shadow/distortion to the image (I wasn’t sure how to approach this work yet), it made it feel like the mouth was consuming the space, it brought parts of the mouth closer. The mouth sat directly in the box you can’t take your eyes off, purposely drawing your gaze in to the mouth. The lips, chin and mouth stretched inside the box and onto the floor, see below. It stretched the chin, making the male in the film have slight creepy feel. This was what I liked about CUBED and Are You Watching?, the film/image covered the figures/breasts as well as the walls, making the whole space the exhibition, not just a display.

Reflection 18/04/21: Purposely objectifying the breast, the women for the viewers to understand the objectification present.

Reflection 26/05/21: I am glad I decided to work with B&W as I think it has transformed my practice with a level of seriousness/intensity to it with the need to listen/watch what I am trying to explore. 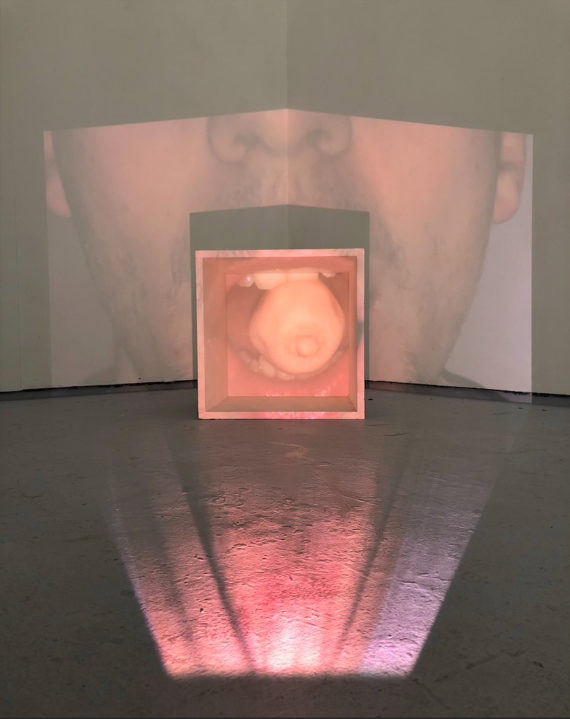 These helped me have an idea of how I could use objects/space around me to deepen the appearance of the film/content. I projected To Bite on my home studio wall 18/03/21, I wanted to work with changing the appearance of the projected film and continue the direct focus of the mouth. The dark space made it feel over powering and as though its invading your space – disturbing, this was a different feel compared to the projection at uni. See below, I used pink card to highlight the mouth as it chewed, I noticed the mouth/lips appeared very wet/shiny as they chewed, I wanted to exaggerate this.

Reflection 21/04/21: I began to accentuate this with cellophane and it has become a massive part of my practice/projection from this point which adds to bringing the projection into the space. 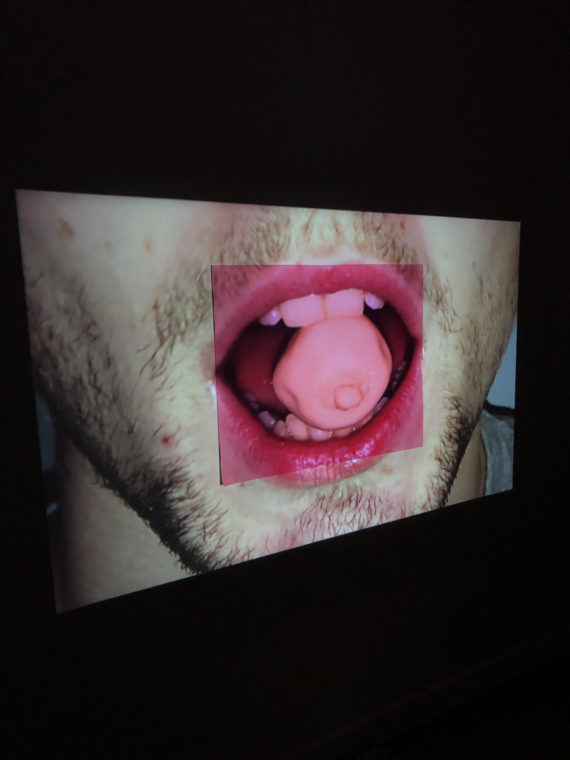 Reflection 23/04/21: From my 1-1 with Jane, it was mentioned Jane liked this image above. The square colour capturing the mouth/movements almost drawing the eye in. There’s this inverted approach in my prints – black text in the mouth and a pink mouth which may be interested to mimic in my exhibition proposal projections, with text?

Mirrors – Catinca suggested working with them, from my series of US in L5 semester 2, they changed the way you viewed the clay figures, create a new angle you wouldn’t often see. I placed a large mirror below the projection. The shine on the lips reminded me of cellophane, I decided to drape it across the mouth and the space to accentuate the wetness. I laid the cellophane on top see below, this created another view/peculiar approach to the mouth. Made it feel like the more you peek over into the mirror the more you maybe seen, relation to the gaze by Lacan, quite a grotesque/scary angle. – What if mirror below was the whole of flooring? 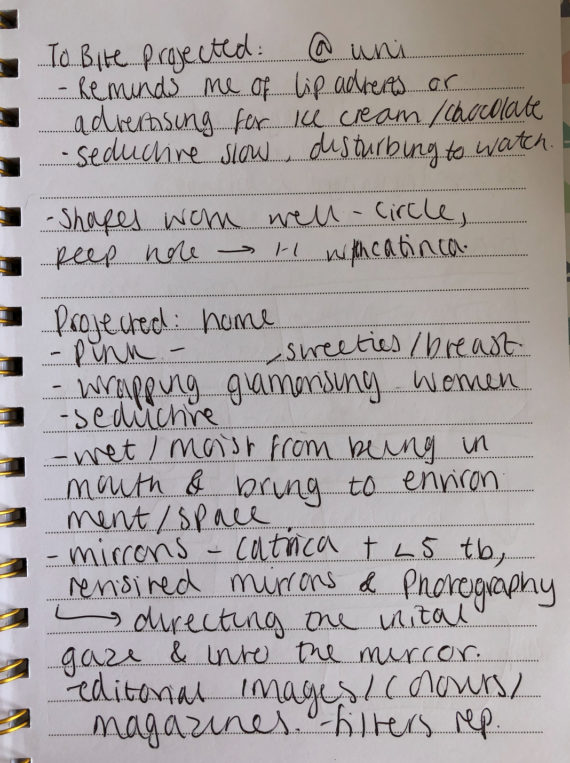 Reflection 26/04/21: It maybe interesting to use these elements in my exhibition proposal – coloured cellophane? Coloured paper? Coloured text? Working with the black and white film.

The projection light bounced onto the cellophane creating a glistening effect matching the lips made me think of sweet wrappers, especially with the icing breasts caught between the teeth – seductive/idealised yet intense, continues to play off this idea of women as a treat. I positioned the pink cellophane to bring the wet look out of the projection/environment. Editorially bold colours are captured in this film, representing this idea of how society glamorises the way women are controlled and treated as objects e.g.films/magazines. The cellophane glamorises the appearance, creating a cover up of what is trying to be said like how Hollywood cinema creates a glorified cover of castration anxiety/sexual objectification. This cover is clear meaning you can still see the issues, its up to the viewer to chose to ignore them and focus in on the cellophane, the bubbly/pretty/sweet like wrapper, instead of the destruction that is happening to women behind, like society does.

21/04/21: I realise I was trying too hard with the colour because I felt I needed it due to the reaction from Are You Watching?.

See Sweet Tooth below, there’s this play on words with the way women are used as a desirable treat, something to consume by the male gaze. Will the male gaze always has a sweet tooth for the female form, no matter the repercussion upon women?

I chose to trial a peephole through toilet roll to create a tunnel gaze reflecting on 1-1 with Catinca, peep holes from her work I Am The System Master (No Signal). Helps zone into the area of the mouth that is doing the destruction, bringing the issues of objectification/female consumption by men/society to the forefront, to force the viewers to see what I want them to see/take away. I use the camera as if it is the audience. So really, does the audience have a choice? The peephole limits the rest of the environment e.g. this is what you’re only allowed to see, similarly how women are told what to do. Will women always be stuck under these stigmas? Also suggests peep holes aren’t always safe to look into – the aggressive teeth/bite becomes negative an angry reaction to looking? Appears confrontational, see below. 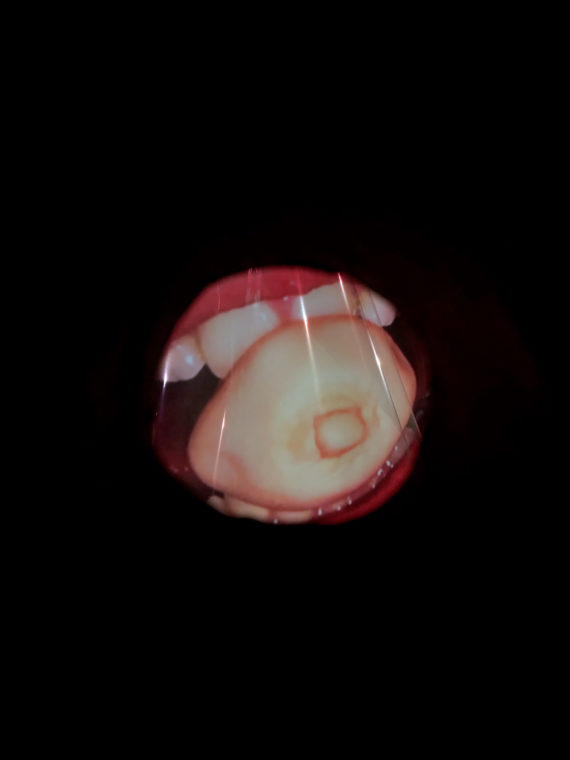 I also film the tunnel vision through the roll – a fun aspect to the work, use it as a device to watch/move over the film, see below. Something disturbing by watching someone eat, becomes repulsive seeing it in a up close in space. As researched in L5 Marcel Duchamp’s Étant Donnés explores depth, perception and the female form’s legs sprawled, he almost uses the woman as a decoration for this piece. I liked that his piece was “visible only by looking through the peepholes” (Philadelphia Museum of Art, 2021).

Using small mirrors, as discussed with Catinca, divert the initial gaze, it changes the relationship with eye to work, creates an illusion visual instead. I aim to use these for my upcoming group crit 24/03/21 as they have a lot going on, open to many interpretations. See below. There’s a lot of experimentation here but I feel the cellophane is most successful.

Reflection 13/04/21: The night before my group crit 24/03/21 of Sweet Tooth B&W I decided to change the appearance of this current works and colour the film black and white, stripping back the extra materials e.g. mirrors, peep holes and focused on the film. This worked so much better. I feel these upcoming works are too busy and not the angle I want to approach, but they were fun experimentation.

NOTE: Mirrors call to reflection and individuality, it calls to female experiences making the work relatable for each women. –  Sarah Everard, speaking out about their experiences with male dominance. 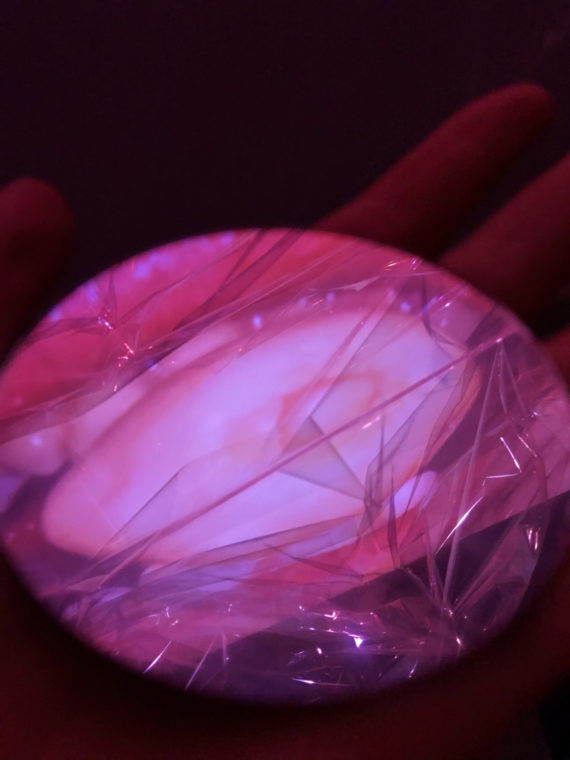 The delicate hand holding the mirror, almost acts as an invitation to look, suggests this accepting gaze Mulvey discusses, “there is pleasure in being looked at.” (Mulvey, 1973, p59), yet it appears to be contrasted with the aggressive imagery reflected in the mirror, does this image juxtapose with the rest of the work? Or is it another way of exploring this glamorisation of the raw/real effects that is present within film? I am unsure.