I began to research Andrea Dworkin’s Pornography: Men Possessing Women essay. Jane mentioned I should start searching the representation of women in pornography as have previously spoken lightly about it. Dworkin addresses that pornography creates this “truly obscene idea that sex and the domination of women must be combined” (Dworkin, 1981, p199) and even though this essay is 40 years old, it stills carries the same ideas now of women in sexual situations, if not worse. “With technological advanced methods of graphic depiction, real women are required for the depiction as such to exist” (Dworkin, 1981, p200). Technology makes it more real/more visual as these women are real people and real situations, it puts the perspective into the viewers mind that that is how they should also treat women in real life. Previously I have spoken about male domination over women in my work and especially visually within Sweet Tooth B&W – chewing suggests this destructive tense control that does also suggest visual of female representation in sexual situations. See the essay below, I have highlighted the quotations which relates out to my practice and notes my initial thoughts.

I’m surprised I’m enjoying this topic I feel quite passionate about it and feel it may take my work further forward in regards to the cinema, representation and forms of confrontation. 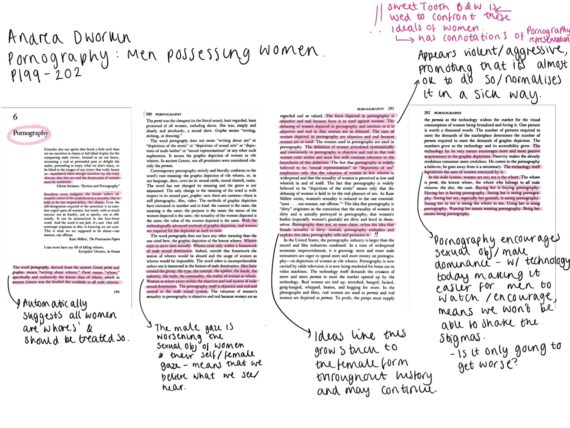 Reflection 26/05/21: I wish I approach pornography sooner as there is so much to learn and work with regarding female representation. Along pornography stands fetishism and it is a topic Sigmund Freud focused in on and is something I discussed slightly within my dissertation. I hope to take this further as fetishism was originally discussed by Freud as a male perversion which stemmed from anxiety castration, as “if a woman had been castrated, then his own possession of a penis was in danger” (Freud, 1927, p153). And from my dissertation I wrote “From this the child pans down the mother and focuses on the feet; this introduces the theory of fetishization and acts as a “sexual satisfaction” (Freud, 1927, p153) for the male, which acts as a distraction from the violence of castration.” (Lockwood, 2021). Feet become the fetish and with this many other things become fetishised, especially revolving women and form while aligns with pornography and it further impacts further the way women are seen as sexual beings and objects.

Dworkin writes, “Whores exist only within framework of male sexual domination. Whores exist to serve men sexually.” (Dworkin, 1981, p200). Pornography derives from ancient greek which means “writings about whores” – there’s this suggestion that women and sex have always been referred to as whores, as though that is all they are and all they will be when it comes to sex. There automatically comes this idea that women, ‘whores’, only have the purpose to serve them sexually and have no control over domination – it’s quite upsetting and disturbing. Dworkin writings are so well written, she’s very straight to the point, no dancing around the subject, feels very factual yet confrontational. This is the same angle I am trying to approach with my practice, quite raw and disturbing visuals in a uneasy environment, hoping for impact.

It makes it impossible for women to to not be sexualised and seen as an object of desire – as pornography isn’t going to change, neither will society’s view/men’s view on women. Even though pornography is easier to get hold of now due to technology, cinemas follow a very similar path, as said before, glorifying and sexualising the female figure almost plays to pornography in a twister way.

“Men have created the group, the type, the concept, the epithet, the insult, the industry, the trade, the commodity, the reality of woman as whore” (Dworkin, 1981, p200).

Reflection 26/05/21: I have used this text above from Dworkin’s book within one of my prints for the workshop – it sums up the stigmatised sexual objectification women face in both the cinema and pornography. I have also referred to this through my current projections and is something I hope to continue to explore after my degree.

I moved onto chapter Whores, Dworkin states “the sexual colonisation of women bodies is a material reality, men control the sexual and reproductive uses of women’s body” (Dworkin, 1981, p203) – “the institution of control include law, marriage, prosititution, pornography, health care, the economy, organised religion, and systematised physical aggression against women (for instance, in rape and battery)” (Dworkin, 1981, p203). “The ideology of male sexual domination posits that men are superior to women by virtue of their penises” (Dworkin, 1981, p203), this relates to Freud’s Penis Envy theory which is reflected in pornography and the cinema, men hold a level of dominance over women who apparently as Freud writes, wish to possess a penis, is continued through sexual control.

It’s interesting to note that women in sex are seen as whores, whereas men in sex are seen as “pimps of pornography”, they are “hailed by leftists as saviours and savants” (Dworkin, 1981, p208). Women are seen to “embrace herself as a whore” and abide to those labels so ultimately there is no escape. “Rene Guyon, who argued for male defined sexual liberation, writes that “Women ages much sooner. Much earlier in life she looses her freshness, her charm, and begins to look withered or overripe. She ceases to be an object of desire” (Dworkin, 1981, p205), suggesting to women and men that there is a negative outlook on growing old, especially as pornography and films idealise the ideal women/figure.

Reflection 30/04/21: Me and Jane spoke in a 1-1 where it may be good to revise using areas of colour back into my work to work with almost highlight the objectification/consumption, like Uman does, upon the women in Sweet Tooth B&W. 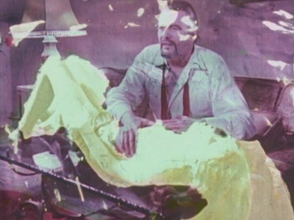 There’s the ghost like quality to the women, as an object the colouration is cream and moves like a visual of a spirit. It relates to my current cinematic work, where Sweet Tooth B&W shares this horror story like feel to the projection, especially in the still below as the icing breast in the males mouth after projection, loses its identity. It becomes a white object too, and once its chewed, it shares no resemblance to the breast or female form, like Uman’s bleached women. Just an object. – would my work have the same impact if I was to remove the braes from the frame? 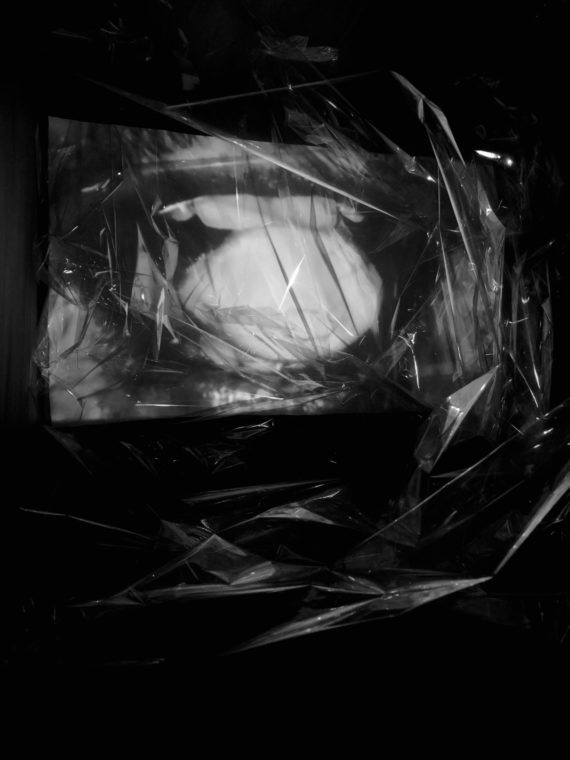