The name Tony Oursler has been mentioned multiple times recently in group crits, 1-1s with both Jane and Gary and in regards to my projections/installation. Oursler is a contemporary multimedia installation artist who is known for his unusual projections of facial features onto fabric and/or objects. “He continues the careful research into the history of technology, and in particular the television medium, its juxtaposition of good and bad, and the presence of media in everyday life.” (Tony Oursler, n.d.). “Oursler explores the psychological and social relationships between individuals and visual technologies” (artnet, n.d.) he does this with humour and irony by making the space unsettling that suggests “this is an embodiment of “media”” (Julin, 2o14).

Caricature is very unsettling because it focuses on the mouth and the eyes, yet the eyes are as large as the mouth and they resemble nothing like we normally see on a face, they’re distorted and have this terrifying appearance to them. Oursler projects onto fabric/alien shapes like objects that then move. Film takes his work to a whole other level where he also then “used his own or friends’ body parts for the projected human anatomy” (Tony Oursler, n.d.), there becomes this unusual relationship between artists and ‘object’ that are “varying in size and shape and displaying human characteristics like eyes, teeth, and mouths” (Tony Oursler, n.d.), see below. Oursler projections reminded me of Hannah Hoch’s collages where she exaggerates different parts of the face. This maybe something to consider within film editing and projections within my work. 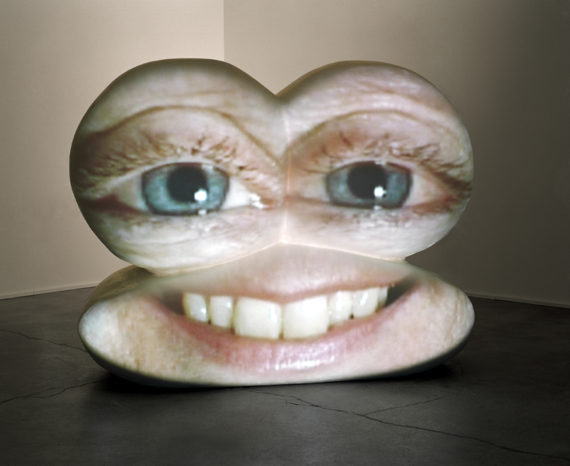 It’s interesting to see another artist like Oursler focusing on the eyes and mouth of the face as they are a very personal aspect that create a gaze and almost introduction from the work to the viewer. As mentioned in To Bite, the icing breasts resembles this eye like quality, which has been mentioned multiple times and in comparison here, the focus on the features are used in a similar way to create discomfort. Caricature was part of an exhibition Station in 2002, at Magasin III and it was described as “verging on the grotesque” (Julin, 2014), the grotesque is something I have currently been battling with within my work and in Oursler’s piece above, it suggests the disturbing version of the grotesque that represent the repulsive side of the media.

The still above doesn’t suggest the same discomfort I have while watching it full screen, see the film of the installation below. “At first glance, these bizarre alien beings might appear entertaining. However, one realizes all too soon that behind the blinking eyes, fluttering lashes, big beaming smiles, gleaming teeth, and puckering red lips, this pageant of projected images aglow with endearing virtual faces is not a funny affair.” (Tony Oursler, n.d.). The installations of these unusual objects have this unusual alien like element to them, noise from the screeching women bellows throughout the space making the work even more uncomfortable and weird. It almost sounds like the women is speaking proper words, or it’s baby talk but in a flirtatious way, I didn’t realise how so much disturbing noise would intensify the work. Skip to o1.45 on the film below.

The rooms are echoey which adds to this disturbing aspect. This made me consider how the space must actually feel being present viewing the work. I can’t say I’d like to go and stand in front of it as “They are at once seductive yet vaguely unsettling, gripping the viewer in their disorientating psychological mini-dramas.” (Lisson Gallery, n.d.). They close this gap between work and viewer, making the viewer feel as though they’re being spoken to, to trigger thoughts of discomfort and “has become known for his mixture of hallucinatory, poetic texts and projections on dolls, creating scenes that are sometimes violent, sometimes humorous.” (Magasin3, n.d.).

In someways I see a comparison to Oursler’s hallucinatory projections with regards to the features the features of the face – I am considering developing To Bite B&W Repeat by creating an even closer angle of the mouth as after researching and viewing Oursler’s exaggerated features plays to this more disturbing and confrontational aspect, see digital drawing below. I am unsure if I have the software/time to create this as a piece to physically create to be able to include for my project but the digital drawing explores the circular visuals Oursler plays in his projections, they play to this objectorial quality which I want to explore further with the breast in my work. 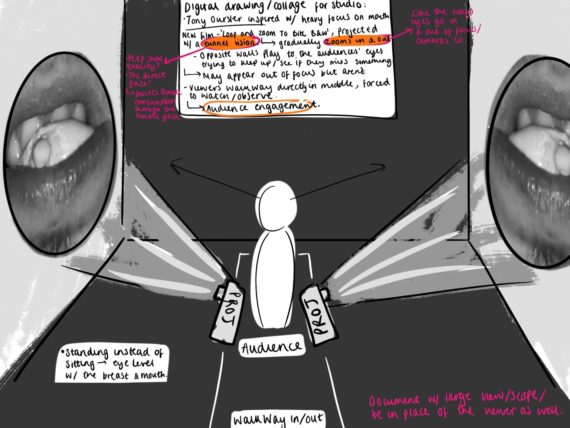 The installation would include this film below, I used key burns to play with the zoom in/out of the mouth, to replicate the circular quality of an eye/camera lens that focuses. Much like a peep hole, this was something me and Catinca explored in my 1-1. The zoom is in line with the chewing, making it a never ending cycle taking/drawing your attention in as the male begin to chew further and then when it gets too much, it reverses and repeats all over again. The slight sound is very quiet but I may intensify this. Catinca mentioned in my 1-1 why I chose not to have sound, previously I have found it distracting but it may be interesting to rework with this when it’s installed. It also almost reminds me of  breathing which is peculiar because it’s an intense/weird film.

Reflection 17/05/21: I may play with sound here too like Oursler, the chewing may make it an immersive/surrounding environment which may exaggerate the disturbance. Pipilotti Rist also works with sound within her large installation and so does Rachel Maclean when projecting her films, creating a scary and nervy place to be.

Reflection 20/05/21: I put this digital drawing into my final group crit 19/05/21 and my peers suggested it resembles a reverted catwalk, instead those doing the walking, are doing the looking/observing. This reversed perception makes it strange became you’re walking into a space where the breast resembles an eye, feeling as though you’re being looked back at, but you’re not. Srin mentioned there’s no cellophane here so does this make the film more direct/intense to watch? There’s nothing trying to hide/cover up the film? Would it be too much? Or is this the aim to create discomfort? My peers mentioned it may be more practical if I see this through with the projectors attached to the ceiling and with a larger walk way (this would depend on the space). Does the projection need to be circular? May be more impactful being wall size – OR Elgin mentioned it would be interesting to see how there were loads of small circles covered on the wall with the film playing through each of them – resembling watching eyes, see further below. I recreated a few practical takes on this idea with placement, but with a more ‘out of reach’ idea that would stay just as a digital drawing and not a physical installation. Especially revolving around the circular projections – it may be fun to trial one and photoshop a number more into the studio space in relation to trying.