The deadline for hearing if I had been shortlisted for the proposal I sent in, came and went just before Christmas. I gathered up all the paperwork, my notes etc for it, and threw them in the bin…as any normal, rational person would. ( surely?) .. .. and since then, I have had two emails off them to inform me that there is a delay as they are still working through all submissions and will be contacting people over the course of the week for/with further details. I’ve got it in my head that there is a delay with my own personal submission, because I asked for money. I keep going over and over it, wondering if I did the right thing, but there is just no way I could face doing another installation – which takes weeks and weeks of work , for nothing. If I don’t get it, at least I can hope that they had considered me, otherwise I would have had a definite answer in the form of a rejection letter before now.

I also heard yesterday that the dates for the DWF exhibition in Leeds had been confirmed for early March. This is another thing I sent a proposal in for, quite a while ago in fact. It was meant to happen in August, but there were all sorts of problems and the festival was put back. I did the work (the planes) and as I had made them anyway, I decided to show them in Liverpool, during the Independents Biennial

The good thing about this, is that the work is ready, so I don’t have to panic about getting something together. I just need to work out a better packing system as I threw them into boxes after the exhibition and some have been crushed slightly.

So…. from having absolutely nothing on the horizon a week ago…. things are finally start to move.

Today, I got myself ready in preparation to hate the John Moores painting Prize : http://www.liverpoolmuseums.org.uk/walker/johnmoores/jm2012/

Then today came, it was my day off, the sun was shining and I didn’t really have a list of things to do. It was also the very last day of the exhibition.

What a surprise. Having gone to every John Moores since as far as I can remember, I expected the usual mix of large abstracts or figurative… the usual ‘large’ but safe . The usual names…… the case of who you know, not what you can do. Sigh….

I didn’t expect so many works to totally break the tradition and move away from works on canvas. That was pretty new. I liked Laura Keeble’s painting on a crushed coke can, Bernat Daviu’s painted overalls, didn’t like Liz Elton’s screwed up plastic sheet – but did like the fact that it was in there! I went round twice and got annoyed with myself for not having any paper in my bag to take notes. I found an old bus ticket and scribbled down some names (see above!) …and wished I’d made the effort to come sooner.

On the way home, I tweeted that I’d been to see the exhibition and really enjoyed it. @JohnMoores2012 tweeted back ‘ look forward to getting your JM2014 entry! You can submit anything painted from now onwards’

Anything? Ooh – I am tempted ( even though it means breaking my rule of not paying entry fees! )

Yet again, I’ve taken the paper out of the pack and ran my fingers over the textured surface. Yet again, I’ve thought about making a mark. That’s as far as it’s got though, as I carefully seal the pack again and put it all away. There’s something very daunting about a fresh piece of handmade paper, when you haven’t drawn for awhile.

I assisted again on a drawing workshop this week. It’s something we can volunteer to do to add a bit of variety to our jobs. (by volunteering, I mean that we still get our normal pay – no more free workshops for me! Jeesh no!)

So it not only gave me a chance to look at drawing from a different perspective, but the opportunity to talk to the artists involved. The workshop leader ( £25 per hour) was a really nice guy and had fantastic drawing skills. I know this, as he plonked himself at a table to draw, while the families sort of got on with things. No new drawing techniques were shown, which is a bit of a shame as there were a huge amount of materials available.

I chatted to the ‘assistant’ ( £10 an hour – standard pay at all galleries) I was surprised to find that she had only assisted on 3 workshops in the last month, each totaling 4 hours. She didn’t have any other work, but said she was happy with that as it gave her time to do her own stuff. Hmmmmmm………. I wonder…

I’ve enjoyed reading the a-n random selection of resolutions, predictions and plans for 2013, as they appear to be so positive.

I was particularly struck by the Quote of artist Leo Fitzmaurice DO LESS and DO WHAT I WANT. It sounds fabulous and I would so like to follow that philosophy…. But if we all did less, who would know about our work? If we all did say, one small pop up exhibition a year, would we be ‘earning our keep’ – if after all, the aim to is be paid as artists?

I would love to spend more time just doing my own work. But if I did that – who would pay my bills?

Obviously, Leo has worked hard for many years, earning the recognition he deserves and can perhaps afford to ‘do less’now. But I’m not sure it is a resolution we can all follow.

In the space where I work I have two statements taped to the wall. They are both printed out in large uppercase fonts. They are intended as notes to myself and at first reading make me appear arrogant. They read: DO LESS and DO WHAT I WANT. The notes have now been up for many years and I have come no closer to achieving their aims. So my resolution for 2013 will be to head towards these encouragements with renewed conviction.

For the first time in a very long time, I have felt very apprehensive about the coming year. Usually, on the 1st of January, I have started to fill in my wall chart by now, knowing what I will be doing for at least the first few months. This year there is nothing. No confirmed plans at all and that is very worrying.

Is it really wrong of me to feel that my biggest achievements of 2012 were not the exhibitions I had or the contacts I made (which were in fact quite good!)……..but the fact that I managed to stick to full time employment, paying off one credit card and clearing my overdraft ?

It’s almost as if I expect the future to be bleak and that I am preparing for it. 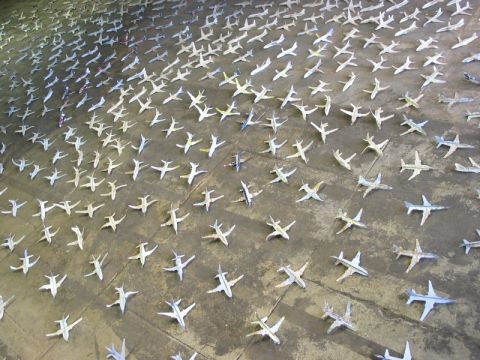