It’s a really weird feeling, deciding to have my work removed from an exhibition. Weird, but I feel a huge sense of relief about it.

Friends on facebook will already know about the WCAF saga, but for the sake of others (and a record for myself) I’ll go through the details.

Due to time restrictions, I haven’t been able to get across to Warrington since the exhibition (the Warrington Contemporary arts festival) opened on 3 October.  I was going to go next week.

But then, several people, who had seen the exhibition started to contact me, alarmed at the way my work had been exhibited.

I searched for images from the PV night and found this… 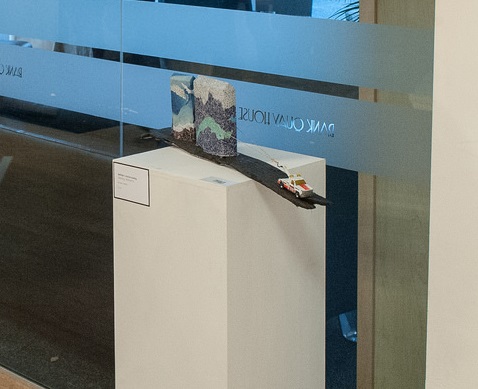 I don’t think I could describe the shock. It looked awful, the plinth was clearly far too small and really, it would only take a child to grab the truck and the whole thing would fall off. (Plus, it was back to front….. but that’s just an irritation) I mean, who would look at that and think it was OK?

Then I was sent 4 images of my work by the Interpretation & Design Officer at the gallery. He thought that’s what I was requesting. On my reply, he asked me to send the original email again ( this was the 3rd time I’d sent it)

I’d deliberately kept my email very light, thanking them for showing my work and suggesting that perhaps a board could be placed under the piece to support it.  I would be more than happy to pay for this board.

In response to this, I received  an email off someone more ‘senior’ at the gallery , stating that my work should only have been accepted if I had provided a large plinth.

Oh OK, so its my fault apparently :-(

I’m just accepting that this was an open exhibition, they didn’t have enough plinths – or maybe they just accepted too many works?  It doesn’t matter.  I just want my work out.

I don’t want to enter any more ‘opens’, it just isn’t worth it.