The third 800-word piece informed by seeing Kim Yong-Ik’s ‘I Believe My Works Are Still Valid’ exhibition at Spike Island, Bristol is by the London-based writer Carrie Foulkes.

For this task, the writers were asked to include a direct quote from the artist, a quote about Kim’s work from another source, and also biographical information about the artist.

Temporal Triptych: Reincarnation in the work of Kim Yong-Ik 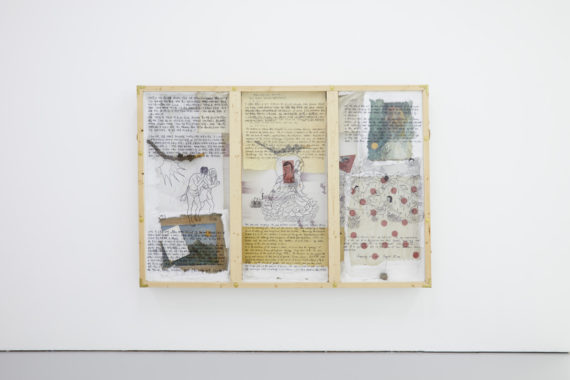 Kim Yong-Ik’s Triptych (1970-2015), featured in the exhibition ‘I Believe My Works Are Still Valid’ at Spike Island, contains references to multiple eras of the South Korean artist’s work. Text and drawings in black ink cover three transparent panels on a wooden box frame containing paintings and works on paper. The Korean and English text ends with the artist’s assertion: “…I no longer paint new paintings. To the contrary, I keep old, soiled, worn-out paintings as they are, continue to make them dirty, paint over them, wrap them, and make coffins and entomb them inside.”

The act of ‘entombing’ his works, visible in the ‘Coffin’ series, exemplifies the conceptual thread that runs through Kim’s practice. This encasing of pieces, rendering them unseeable, has multiple potential meanings, dependent on context. In the piece Untitled (Dedicated to the Exhibition ‘Young Artists’ in 1981), the refusal to show his work, to leave it wrapped and boxed, was a political gesture – an act of defiance against the repressive government at the time and the limitations of art in such an environment.

‘I Believe My Works Are Still Valid’ is an exhibition of unfinished works. An unfinished work is an open work, asserting an essential right to change over time, whether by chance, accident, or deliberate reworking by the artist. The process of wear, tear, weathering and decay imbues Kim’s paintings with a time-based element. They resist the static and fixed identities usually bestowed on painting as an object. The materiality of the surface of these works is inescapable. There is nothing pristine. In some cases the piece is completed by the ‘vandalism’ of others. What usually disqualifies a thing from being called art – damage – becomes an intrinsic element of the work.

Often resurrecting past works for renewal, Kim’s practice is a continual process rather than a production of finished works. No piece is stable or resistant to metamorphosis. He buries works in the ground, only to excavate them for display many years later. He leaves canvases outside his studio to deteriorate in the rain. He welcomes chance and natural processes. He uses plant dyes and juices alongside traditional materials and celebrates the erosion of his works. His polka dot paintings embrace what the artist’s Seoul-based gallery describes as “subtle imperfections such as dust, fragments of his thought process, and doodles. In this way, the life cycle of the artwork functions like a visual metaphor, illustrating his critique of aesthetics as advocated by modernism and the modernist society.” 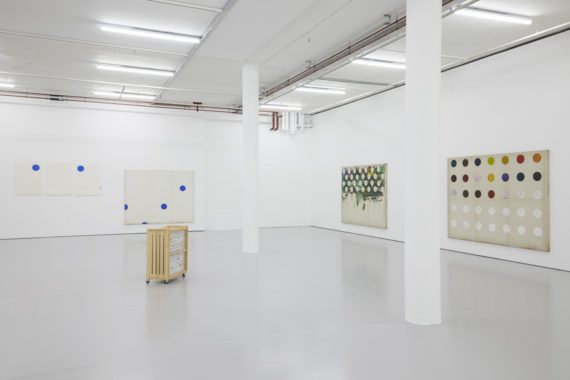 The dirty, imperfect, scarred, marred surfaces of Kim’s paintings and the rejection of the flawless surfaces of modernism set him apart from his contemporaries in South Korea. The artist releases his control over the work, which becomes infused with a time-based sensibility. The resurrection and remaking of past works forms part of an artistic ecology of materials and ideas, refusing to become finished.

The triptych itself could be thought of as representing past, present and future, and the convergence of these three temporal states in a single work. Kim revisits past works as an act of rebellion against the notion of a completed work. He revels in the incomplete and the importance of process, maintaining a stance that subverts any formal reading of a painting as an object independent from context and the ecological system of artistic practice.

The exhibition space at Spike Island provides a versatile site for the display of complex work that is at once installation, sculpture, concept and painting. Around each work exists the possibility of transformation, the promise of continued development. Writing about the show for Bristol 24/7, Jacob Warn describes this as “a methodological approach, to keep art in a state of constant [re-] creation, being weathered, lost, destroyed and re-made”.

The walls of the gallery become extensions of the canvases, bearing notes in pencil written by the artist. The floors, walls and ceilings are used for display, with works stacked, hung from the ceiling and supporting columns. This is a fitting way to show work that resists categorisation, and encourages a deeper engagement with the pieces. This is an exhibition that demands to be read as a whole, charting the evolution of the artist’s practice and the recursive loop that sees him regenerating and re-contextualising past works. In this artist’s practice, nothing is resolved. An artistic and political ambiguity permeates the stained canvases.

In Buddhist thought, the cycle of reincarnation will continue until a being reaches nirvana, or enlightenment. Writing on one of his ‘Coffin’ works, Kim evokes the bodhisattva Ksitigarbha (an enlightened being motivated by compassion to assist others): “they say that if you paint, create a sculpture, or mold clay in the shape of Ksitigarbha and keep it enshrined together with the deceased, they will be born again.” In the work of this artist, the symbolic ‘funeral’ or literal burial of an artwork is not the end of its life. Ideas and materials are continually reborn, taking on new bodies and new forms.