The fourth 800-word piece informed by seeing Kim Yong-Ik’s ‘I Believe My Works Are Still Valid’ exhibition at Spike Island, Bristol is by the Bath-based writer Trevor H. Smith.

The writers were asked to include the following in the piece: a direct quote from the artist; a quote about Kim’s work from another source; and also biographical information about the artist. 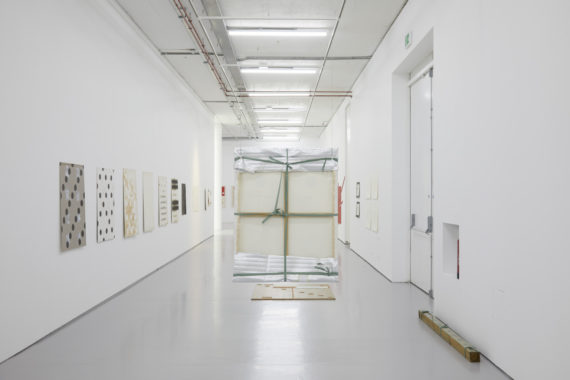 South Korean artist Kim Yong-Ik’s first European solo exhibition, ‘I Believe My Works Are Still Valid’ covers the past 40 years of his output. It includes many works that have been revisited by the artist – painted over, boxed, or annotated. Such is the importance of acts of removal and realignment in this artist’s practice.

Born in 1947 in Seoul, the capital of newly created South Korea, Kim has lived through a period of momentous change in the country. First under direct US control and then during a civil war that followed the country’s independence in 1948, he has witnessed student uprisings, military coups, dictatorship and the imposition of martial law.

Against this turbulent political backdrop it is perhaps unsurprising that Kim rejected his education in Dansaekhwa – traditional Korean monochrome painting – in favour of a critically engaged practice. In the words of his gallery in Seoul: “To trace Kim Yong-Ik’s life is to observe the evolution of Korean visual art and culture and its dynamic and profound changes since the 1970s.”

Having rejected Dansaekhwa, Kim produced conceptual work such as Self-Identification of Plane Object 1 (1974), in which a canvas was folded, spray-painted in monochrome – even this radical departure retained something of Kim’s previous practice – and then attached to its stretcher, allowing the markings to reveal the canvas’s once folded history.

Alongside this piece at Spike Island is Kim’s response to years of rule by military dictatorship, first exhibited at South Korea’s 1981 Young Artists Biennial. The work comprises three paintings packaged in cardboard boxes, stacked, and then labelled with their contents’ titles and dimensions. During the work’s initial installation, Kim made the pivotal decision to simply present the boxes as they were, giving it the title, Untitled (Dedicated to the Exhibition ‘Young Artists’ in 1981). In doing so, he combined the cultural, conceptual, and political strands of his practice, turning the work into a comment on state censorship and the autonomy of the artist.

Caught between the Minjung (people’s art) movement and theoretical modernism, Kim chose a third way – one that allowed him to continue making politically-charged work but that would also sit within the conceptual framework of the modernist movements that had dominated contemporary art during his formative years. This typifies the rebellious streak that runs through Kim’s work; his ‘coffined’ series, in which canvases are ‘laid to rest’ in crates of wood and Perspex, kicks back against the curatorial control of the gallery. By un-framing paintings that were made 20 or more years ago and painting or writing over them, Kim is undermining notions of perfection and completeness in an artwork. 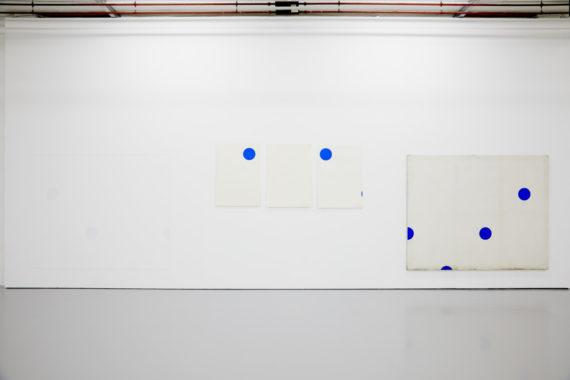 ‘I Believe My Works Are Still Valid’ contains many of Kim’s polka-dot paintings, from early works with their uniform grid formations to more recent and updated versions in which the dots have migrated across the surface of the painting, and in some cases entirely off the canvas onto the gallery wall behind them. Others have been painted-over, almost whitewashed, and given titles that reveal Kim’s enduring interest in the political history of his homeland, such as Apocalypse of Modernism (2017) and Erased Utopia (2016).

These acts of erasure and omission align the work with strands that arose during the minimal and conceptual movements of the mid-20th century, where first the artist and subsequently almost all physical aspects were removed from the work. There is humour and mischief in Kim’s work that bears comparison to artists such as Keith Arnatt, whose Art as an Act of Omission (1971), comprises a single written document considering what it means to focus on the removal of content.

Kim’s technique of revisiting work, even after it has been shown in public, chimes with Orwellian ideas about censorship, authorial control, and the rewriting of history. During the Cold War, such ideas were associated with extreme forms of government in Eastern Europe and indeed in the Far East. Now they strike a chord closer to home, enmeshed as we are in so much ‘fake news’. Having lived through the political upheaval of the 1950s and ‘60s, the brutally repressive regimes of the 1970s, and then, from the late 1980s, a period of political calm and unparalleled economic growth, Kim has shown he still occupies an uneasy middle ground – his own demilitarised zone where he straddles the political, the social, and the art-theoretical.

Through the re-presentation of his own work, he has turned his attention to the means by which culture is now produced, as he explained in 2016: “This is an age where editing is a required process for art-making, in place of creating. Furthermore, the age of ‘development-creativity’ has come to a close, and one can now declare an age of ‘collection-compilation.’ As I move forward towards the ‘deconstructed self’ from my initial ‘modernist self’ I will no longer create new works. Instead, I will present those I have reinterpreted, restructured, and reappropriated from my previous works.”

In 2017, such an approach makes Kim’s work not only still valid, but perhaps more vital than ever.