Because Rachel was not able to attend the Spike Island workshop due to a last-minute flight cancellation, she visited the Kim Yong-Ik exhibition at the Korean Cultural Centre UK in London.

To follow is her 800-word article informed by Kim and his work. 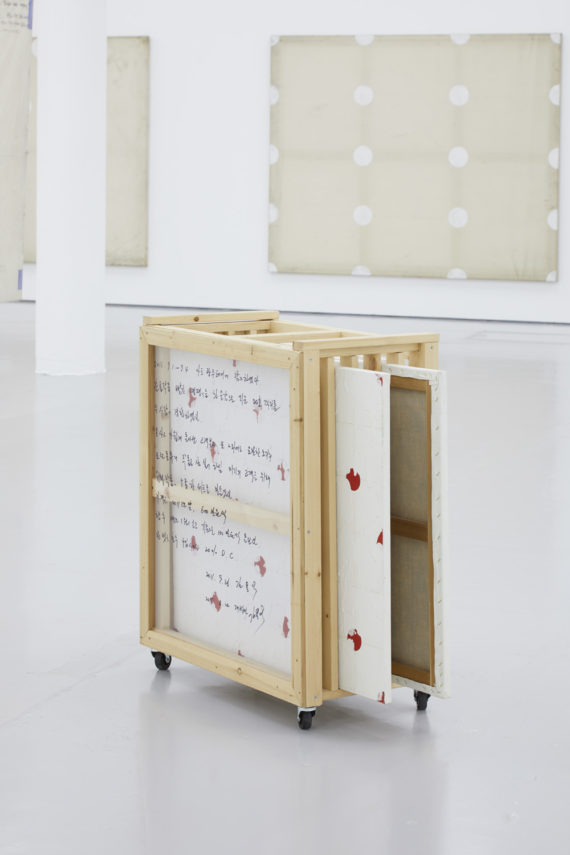 Two concurrent exhibitions at Spike Island, Bristol and the Korean Cultural Centre UK, London, have been exhibiting the work of Korean artist Kim Yong-Ik this autumn. The overarching title, ‘I Believe My Works Are Still Valid’ (also the title of a 1997 work by the artist) declares Kim’s resolve and strategic approach to exhibition and art making. Through reusing motifs, defying newness and sidestepping audience expectation, he pushes, prods and pokes the roles of art, artist and institution.

These solo exhibitions are the artist’s European debut, despite the septuagenarian being a longstanding pioneer of contemporary art through teaching, biennale appearances, writing, and co-founding artist-run Art Space Pool, Seoul. His sluggish rise is perhaps linked to the fact that he (deliberately) didn’t slot into either of the post-civil war artistic movements in South Korea. Instead, he ciphered elements from both Dansaekhwa (Korean Monochrome) and Minjung.

The restricted palette and Zen-infused abstraction of 1970s Dansaekhwa has now been fully introduced to Western consciousness, with artists Lee Ufan and Park Seo-Bo becoming widely documented. But despite Kim studying under Park, he remained on the periphery, criticising the group’s Western aping. The opposing and revolutionary Minjung tradition used representational painting for its biting political commentary, and has also been afforded wall and book space. Kim, however, did not adhere to its socialist realism or figurative scenes.

Spike Island presents Kim’s work from the 1970s onwards, and at KCCUK a new site-specific installation draws on an economy of means, spacing and tempo to guide the audience through its tricky space. Kim places canvases at shifting heights. Some feature his signature polka-dots in black or red paint, while others are utterly bare. Many of the circles are on the canvases, whilst others creep onto the wall in paint or pencil, narrowing the distinction between support and architecture. One circle straddles canvas, wall and neighbouring partition. Circles also nonchalantly punctuate across no-entry gallery doors.

HG Masters in ArtAsiaPacific describes Kim’s polka-dots as “pulling out various ‘sacred’ tropes from modernist abstraction and then undermining their supposed integrity… Park Seo-Bo would have hated these works”. The uniformity of the polka-dots could at first be mistaken for Minimalist seriality, but the head-height circles are “thoughts”, and Kim views them as a culture or language. The canvases, meanwhile, are “human”, and the untouched ones are, according to the artist, free of thinking, agony and systems. Bliss? The whole installation is titled Utopia, 2017, and Kim acknowledges this unreachable realm: “My wish is for them to be a sedative with the toxin of impotence imbued within”.

The calm, rhythmic dance and comfy, predictable reassurance of this canvas-circle-wall correspondence is abruptly broken, and circles are triggered across the KCCUK wall. Seven scattered black circles featuring tiny blue stars, form the arrangement of the Big Dipper, an identifiable constellation where answers are sought but often denied. According to the artist, this part of the exhibition “became a space that has materialized my ongoing intentions to create a collision between what makes sense and what does not”.

It would be tempting to read the white, red, black and blue colours in this exhibition as referencing the South Korean flag, or easy to insinuate the white gallery walls and blank canvases as symbolic of traditional Korean dress, Joseon porcelain or Baeksaekpa (School of White). But the artist refutes my Western stereotyping and affirms “one cannot find the life of humans, history, or politics in my canvas paintings”.

In 1960s Japan, the Mono-ha movement rebelled against Western modern art and Ufan’s empty canvases were left silently to speak with their surroundings. Like Mono-ha, the space at KCCUK is integral to Kim’s work, through minimal but concise artistic intervention. There is nothing new about painting directly onto a wall and Kim knows this. The BMPT group (Daniel Buren, Olivier Mosset, Michel Parmentier and Niele Toroni) in 1960s Paris had already pulled painting off the picture-plane and also criticised the artist-as-hero by undermining the originality and authorship of their work, often muddling who made what and continuously making the same work. Niele Toroni worked directly on the wall with his obsessive series Imprints of a No. 50 Paintbrush Repeated at Regular Intervals of 30 cm. The ‘zero degree’ works by Olivier Mosset took this dissent from individuality and expression further with 200-plus identical paintings of black circles on white canvases.

Kim knows, then, that his recent work is not an artistic innovation as this myth had been tackled decades before. Therefore, to still choose to rebel against newness, when this is not new in itself, is his artistic gesture, and through its weariness, comes potency.

Kim’s consciously powerless act at KCCUK becomes a melancholic response to progression and action. He claimed modernism made him literally sick and therefore painting recognisable modernist forms is designed to passively tackle that injured heritage. The dots imbue meaning and coherence; however, that meaning is ambiguously meaningless.