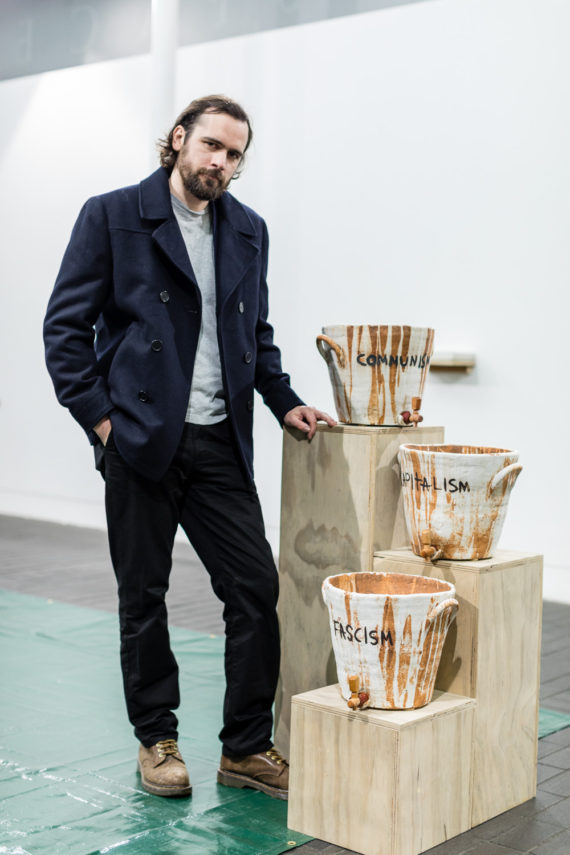 On a visit to Mark Essen’s Birmingham ceramics studio you might come across an artist in residence exploring “unconventional means of making humans”, or find the winner of The Woman’s Hour Craft Prize running a clay workshop for beginners. Another day there might be a hen party in full swing, or a workshop run by the homeless charity Crisis. This unique studio, used not only by artists but by all sections of the community, epitomises Essen’s ethos of combining traditional craft materials with fine art practice, tackling big conceptual issues while engaging with ordinary people, and promoting health and well-being through art. You can’t rush the making process, believes Essen, and there is time here to take control and enjoy making, with no expectation of the end product: “There is no such thing as a bad ceramic,” he says.

In an interview with curator Linsey Young in 2016, Essen explained how he discovered clay during a residency at Wysing Arts in 2011. It was the year The Grantchester Pottery was formed and visiting artists were working with clay. The residency offered Essen six weeks of time and space and marked a changing point in his career, as he turned away from purely conceptual work and developed a more hands-on practice. A 2015 article in the contemporary ceramics magazine C-forum mentions Essen as one of a number of artists using clay as “an affordable and easy way to make sculpture, to blast through ideas in the studio quickly… a kind of 3D sketch that is easily rubbed out or made permanent depending on how successful it is deemed.” This certainly applies to Essen, who does not draw in a conventional two dimensional way.

Born in 1984 in Reigate, Essen moved to Birmingham to go to art college. He graduated in 2007 with a Fine Art BA, achieving an MA in Sculpture from the RCA in 2014. Experiences such as the Wysing residency and others at Edinburgh Sculpture Workshop and South London Infinity Projects have provided the opportunity to develop his practice alongside other artists and curators. Selection for exhibitions such as Bloomberg New Contemporaries, Rough Music at Cass Sculpture Foundation and ‘That continuous thing’ at Tate St Ives have kept him in the spotlight.

Essen speaks animatedly about the people and ideas that are important to him. He mentions philosophers and social thinkers, quotes Heidegger – “technology moves faster than culture” – and refers to an article on “metabolic rift”, Marx’s theory of ecological crisis caused by capitalist production. He is also a fan of Newcastle University’s Professor Richard Clay, who recently presented a series for BBC4, Utopia: In Search of a Dream. Essen’s principles are grounded in his knowledge of political and social movements, his interest in the impact of the Industrial Revolution, and characters such as John Ruskin, the Arts and Crafts movement, and Matthew Boulton, the 18th century manufacturer who enabled mass production of coinage.

The artist’s concern with currencies began at university and developed in response to his exploration of the disappearance of money as a physical object. He almost bought a bitcoin when he was at the RCA but couldn’t afford to waste money on it, he says – a possible cause for regret now that the virtual currency’s value currently outweighs that of gold. A commemorative Bitcoin now features in Essen’s new installation at Jerwood Space, London. 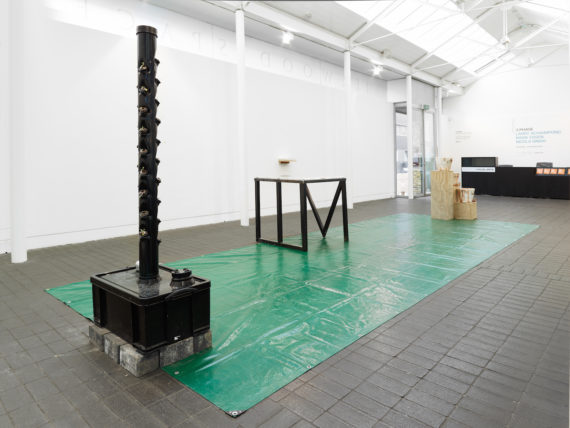 The installation is part of the first of three exhibitions for 3-Phase, an artist development initiative aimed at supporting artists with less than 10 years practice. Essen’s installation, ‘Tis ‘Ard to be a God, is comprised of three new works and is contextualised in a thoughtful essay, Ideological Warfare in the “Age of Clay”, by Angels Miralda. In it she reflects upon clay as a “staple product found ubiquitously in advanced cultures…”, “a fundamental tool to the three ideological pillars of the 20th century… communism, capitalism and facism.” It is these three words which are presented on three clay buckets in Essen’s reworking of a Greek water clock, Believe Your Beliefs and Doubt Your Doubts.

A second work in the installation, A Possibility This Will Never End, features a display of defaced and alternative currencies, including the Bitcoin, hinting at the possibility of alternative economic systems. The third work sees him literally nurturing the seeds of ideas in his hydroponics tower, The Illusion of Growth. Through this hydroponics system, he points to the notion of a more sustainable future, with a nod to Degrowth, a movement advocating the downsizing of consumerism, and an emphasis on well-being, culture, nature and community.

Essen’s previous work seems hard to pin down. Earlier subject matter and means of making are varied with works such as Mobile Mixtape, a music mix inspired by ‘90s rave culture, and Chisel Break, a film of found footage, exploring paranoia, power and popular culture. His work for 2013’s New Contemporaries, Everything will come to an end but your testament will still exist, consisted of an enigmatic assemblage of oil drums, ceramics, a mirror, a plant, and a chess table.

Sarah Williams, Jerwood Visual Arts’ head of programme and one of the 3-Phase selectors, suggests that Essen’s current work demonstrates more clarity of intention. She says he stood out among the 719 applicants for 3-Phase because he showed the potential to push forward with ideas around social change; ideas which had been in his mind for a long time, but which had not yet visibly surfaced in his work. Linsey Young describes him as “very left wing and very politically outspoken”, but like Williams, she notes the absence of visible representation of political ideologies in his work, though she acknowledges that his decision to set up his studio in Birmingham is “a hugely political act”.

Essen cites contemporary artist and social activist Theaster Gates as an influence. Gates uses funds raised from sales of his artwork through the art market to finance projects which bring about social change. This, says Essen, is what he wants to do. Like Gates, he presents an optimistic alternative to pessimistic visions of a dystopian future. Perhaps it is this optimism and Essen’s attempts to posit alternatives which make him stand out. In the words of another of Essen’s heroes, John Ruskin: “What we think, or what we know, or what we believe is, in the end, of little consequence. The only consequence is what we do.” And there is no doubt that Essen’s actions speak louder than words.