Stemming from the second writer development workshop at Jerwood Space in London, Carrie Foulkes decided to write a profile of the Newcastle-based artist Nicola Singh – one of three artists chosen for the 3-Phase programme. 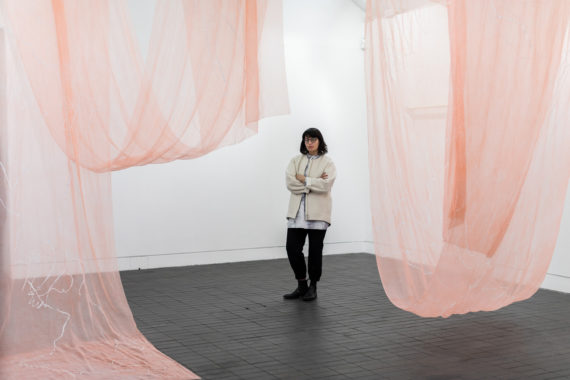 Working across performance, sculpture, installation and text, artist Nicola Singh is known for her process-driven installations and innovative performances. Concerned with the unique characteristics and energy of a space, Singh facilitates encounters between bodies and objects. A collective approach to making work is important to the artist, who says: “I love it when I can see that an object has been through something, that it is part of a conversation of minds and bodies.” She holds that “the body is a thinking thing” – the body holds knowledge and can express that knowledge in multiple ways.

Born in Newcastle in 1986 and still based in the city, Singh recently completed a practice-led PhD in Fine Art at Northumbria University, for which she submitted a dissertation by performance. A sensitivity to place and intuitive use of sound is noticeable in her work, informed by her previous studies – an MA in Curating from the University of Sunderland and a BA in Contemporary Music Performance and Visual Arts from Dartington College of Arts.

Singh is one of three artists selected for the Jerwood 3-Phase programme and her exhibition at London’s Jerwood Space is the first of three that form the award. Her installation (Sweet Spot, 2017) features drapes of pink fabric bearing outlines of human bodies inked in white. White wooden bars are fixed to two opposing walls and an oblong cushion is propped against a third wall. It feels as if something is going to happen in this space, or that these objects are the detritus of an event that has already unfolded.

The sense of being in a room full of props is confirmed during a performance by Singh and two collaborators – Jenny Moore and Harriet Plewis – on a November evening at the gallery. Dressed in matching denim costumes handmade by Singh, the three women sing, chant and move in the space, playfully interacting with each other and the installation. Phrases are repeated; fragments of text are sounded in unison. These phrases have their origins in a workshop in Newcastle run by Singh with four women artists. She initiated an automatic writing exercise and then condensed these writings into a single text. A recording of her reading this text serves as a soundscape for her installation.

As part of this workshop the women drew around each other on the pink fabric which was then put on view at Jerwood, traces of the human form suspended from the beams. In this way, Singh’s installation simultaneously serves as a set up for a performance and a documentation of something that’s already transpired.

The preparation for the performance consisted of one afternoon of ‘hanging out’ with Moore and Plewis – Singh wouldn’t refer to this as a rehearsal – and improvising in the space. She instigated conversations, an invitation to explore the terrain of the exhibited works, rather than giving specific instructions: “It’s so refreshing,” I overhear a fellow audience member saying to Singh after the performance, “to see something so spontaneous and fun.” 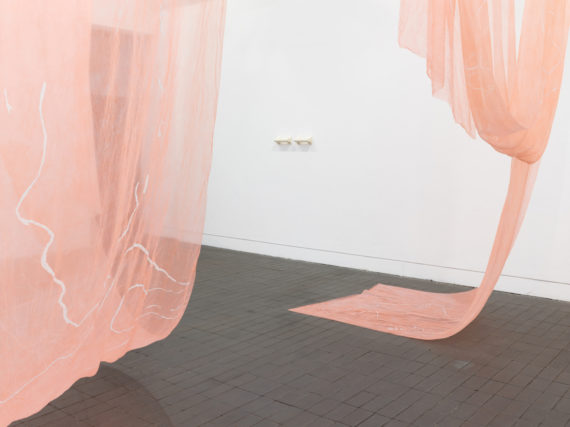 Singh’s openness to chance and collaboration is evident in previous works such as FIGURE FOUR presented at Baltic39 in 2017, one element of which was a workshop for artists in which the practitioners were invited to respond to a prompt from a Paul Thek work to ‘make a monkey out of clay’. Interactions with the clay and each other became a starting point for discussions around pedagogy. The clay monkeys themselves, after spurring these conversations, appeared as ‘moments’ in an installation.

A further show at Baltic39, ‘The sounds here are bouncing around us and Susan and Anne and that Object’, was conceived of as a ‘performed or workshopped exhibition’, experimenting with the ways in which ‘language can be heard, visualised and choreographed’. Writing for Corridor8, reviewer Eleanor Benson comments: ‘Interestingly, what resonated throughout each installation piece was the importance of their devising as a fluid process, over traditional aims to generate a self-conscious final aesthetic.’

The unique challenges of exhibiting performance are well known to Sarah Williams, head of Jerwood Visual Arts and a 3-Phase selector. The opportunity to exhibit at Jerwood offered Singh a new way of working. Williams says that Singh “does something with the space that no other performing artist I’ve worked with has done”. Singh’s diverse involvement with performing arts includes the founding in 2010 of the organisation Tender Buttons alongside artist Tess Denman-Cleaver, hosting workshops, installations and public interventions in a wide range of settings including ‘warehouses, galleries, train stations and headphones’.

Singh’s subsequent role as lead artist and curator of collaborative research project Life Without Buildings saw her devising a series of events including a collective bike ride, an acoustic performance in a disused building and a procession. All these events explored ways of thinking with and through movement and sound in relation to architecture. This focus on collaborative practice, present in her earliest public works, continues to be a vital element of her work today.

Singh is keen “to meet the room with the objects”, a site-specific approach that fits well with the 3-Phase challenge for artists to, as Williams puts it, “respond to different locations, gallery contexts, social and architectural spaces” over the course of the three exhibitions at Jerwood, Workplace Gallery and Eastside Projects. Once dormant in the gallery, Singh’s sculptures invite touch and participation. Singh replaced the existing audio with a new audio recording of her Jerwood performance, creating a new layer of this evolving piece, vestiges of performed events, of bodies and voices held and witnessed by the room. As with so many of her previous projects, the space is both a repository for the echoes of past gestures and a springboard for the next phases of development.