One of the joys of a residency is sharing my work with the host organisation. For some time now it has felt like a very fruitful partnership with the archaeologists on the Ness of Brodgar. But on a more personal level, it is good to be able to give something to the individuals who feature in my drawings. Having acquired a scanner and some good paper, I am now able to offer people prints from my sketchbooks. It’s a way of saying thank you for letting me draw them as they work, often in unflattering positions – and for answering all my layman’s questions.

Three drawings today will all go the participants. 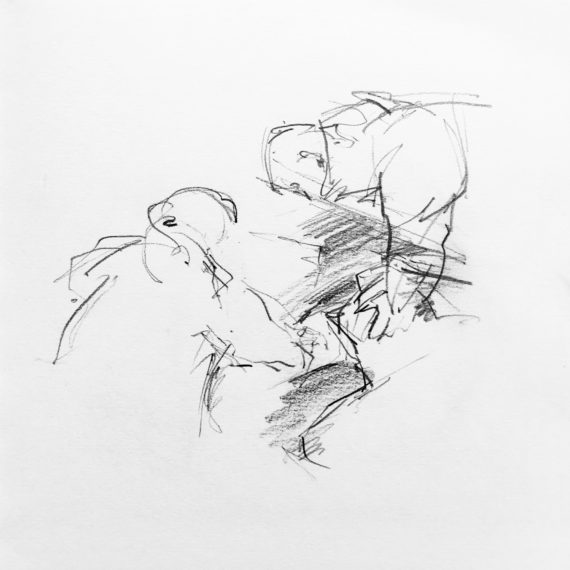 A moment of excitement outside the east entrance to Structure 12. 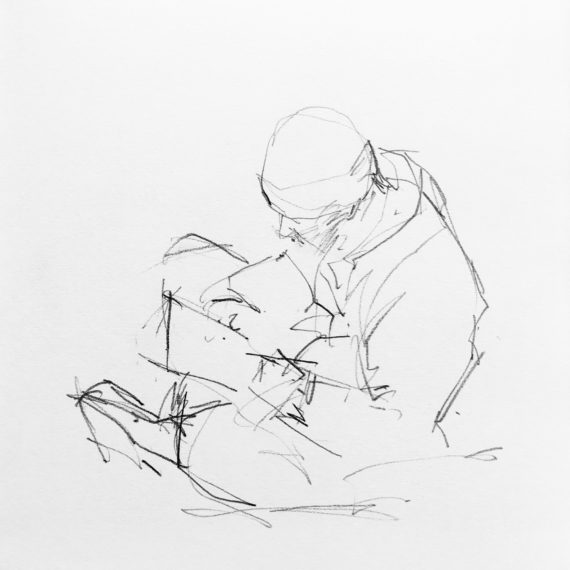 A young archaeologist does his paperwork in the trench. 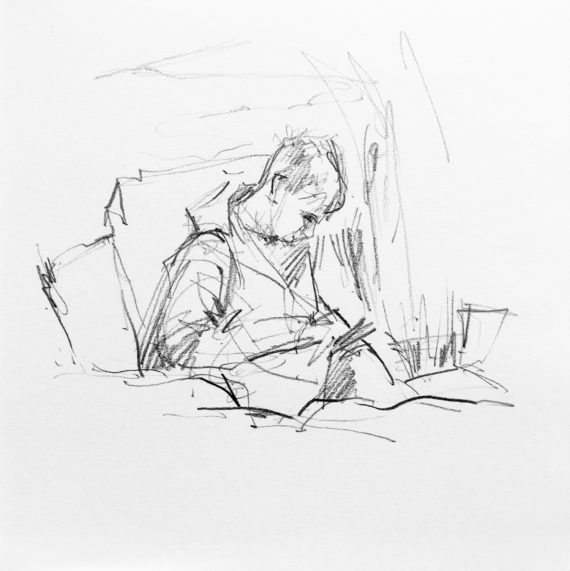 A supervisor works on his records in his outdoor office.

The day began with a discussion on the Neolithic method of construction. It seems that they started with good intentions but when chaos intervened they made the best of what they had.

How many of us artists identify with this Neolithic work ethic, which I see as a form of rigorous pragmatism? Can such a way of working be regarded as a serious research method? Some may see it as action research but I prefer to look at it terms of phenomenology, where we let the world present itself, and allow that to lead to reflection. The process of drawing and painting whatever is in front of me, means looking at something over time, which allows for ongoing reflection as the work progresses. Then returning to look at the work some time later, new ideas emerge. 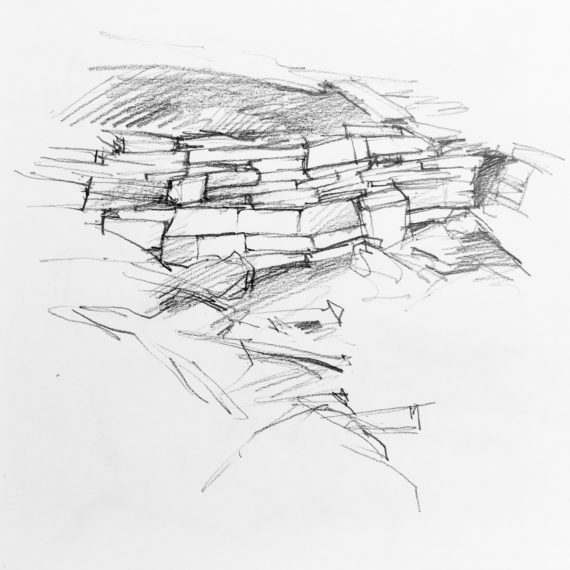 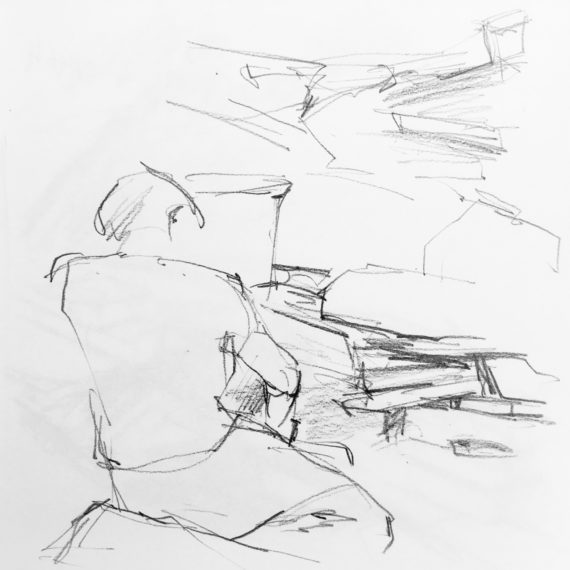 So back to the drawings of the day.  Many of the structures on site are built on top of other structures – often using stones robbed from existing buildings. (Cf Neolithic work ethic) Some walls, especially the early ones are very beautiful, but the later walls are a patchwork of available material and now, over the millennia, they also undulate where walls on top of walls are slumping.  The far wall in Structure 12 is a good example of this. 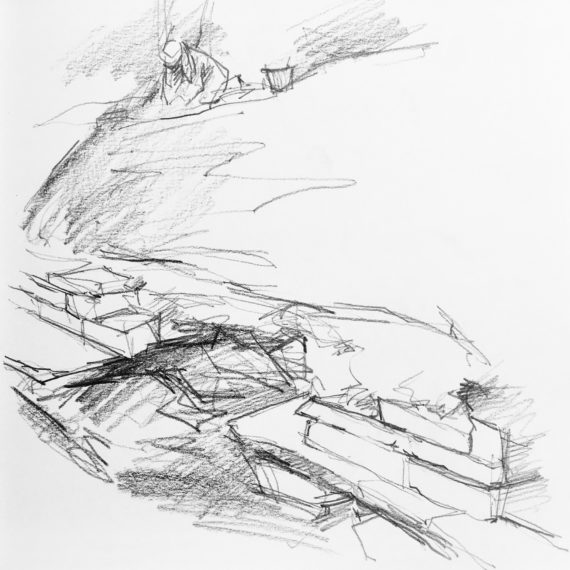 Compare the haphazard wall of Structure 12 with this piece of  Structure 27, where what appears to be an earlier wall is made of beautiful straight courses of large stones.

My random sketches and sound recordings are the raw material for at least two outcomes – to date, a film and a book.  The book, which will consider the role of perceptual art in other areas of research, is a thing of the future but the thoughts expressed in this blog are a sketchy start. The film, currently in production, aims to be a reflection of activity on site at the Ness of Brodgar dig – an impression of the everyday process of archaeology. Archaeologists come and go for different periods of time – some new this season and some returning over many years. They also come from near (down the road in Orkney) and far (from all over the world, including Australia).  The edit I was working on this morning (while rain stopped digging) combines voices from across the years in one scene. Voices of the Geomatics team who have left now speak with newcomers who never met them. It is starting to give a sense of being here rather than a diary of events.

Today’s random drawing looks across the main trench, with small groups of people working together – or at least if not ‘together’, in the same small space. 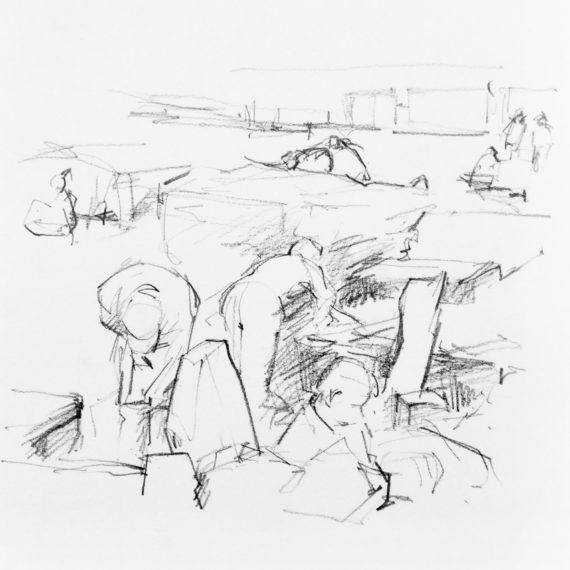 And a quick watercolour of the incoming weather as a backdrop to the spoil heap and pile of tyres. 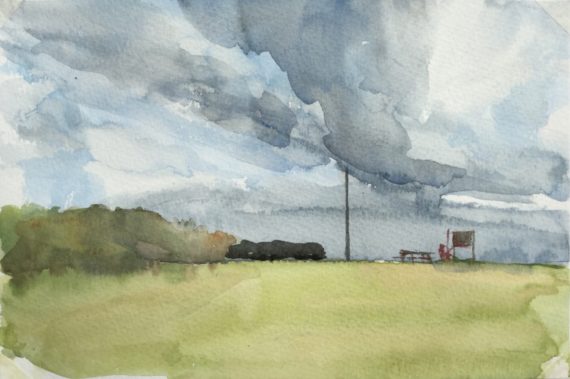 Wearing my researcher’s hat I am logging in spreadsheets all drawings, paintings and sounds, with cross referencing between visual and audio.  Towards the end of last season it was suggested that I should also record the archaeological references to my drawings – so that in future it might be possible to link contexts and finds with any drawings that feature them. So a fresh ‘context’ spreadsheet has begun and I am having to go back over four seasons of drawings to bring it up to date…

Many of the drawings that feature contexts will include the people working in them. The archaeologists are now enjoying the prospect of their crouched figures, quite often observed from the rear, being part of this new archive.

The drain whose progress I am following has several context numbers for the various parts of its construction – but may eventually receive one overall context number, which will simplify things. Work around it is developing well and there are hopes for significant change next week. 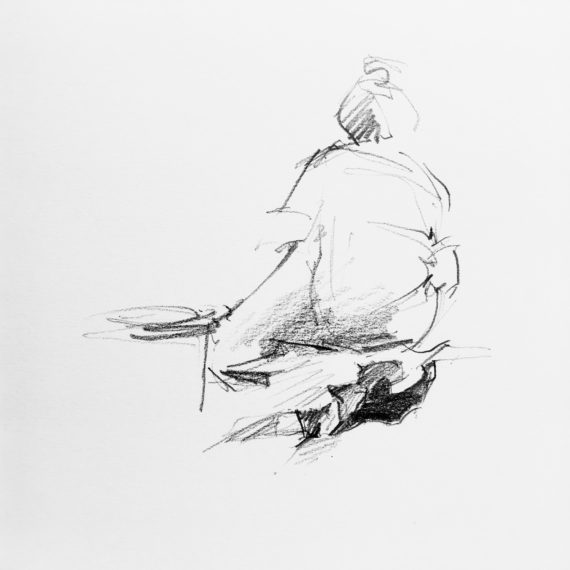 All news of the drain will no doubt feature on the Ness of Brodgar web site in the Dig Diary.

Today I have been contemplating timing in my relationship with archeology. Sometimes I’m in the right place at the right moment but unprepared. While at other times I am completely prepared but have to wait ages for the right moment. 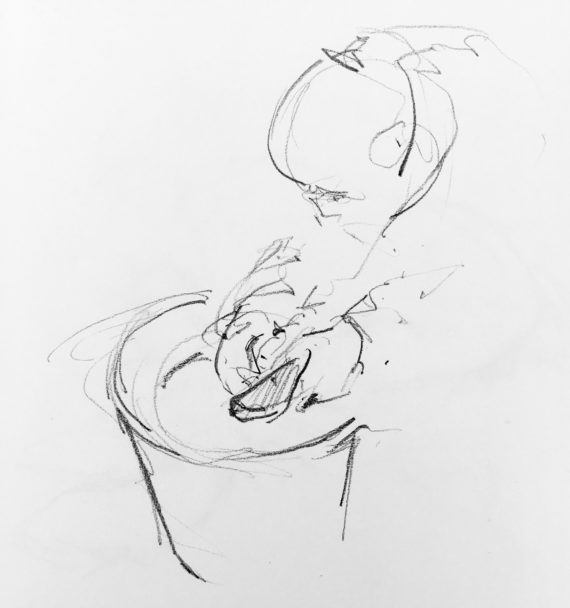 In Trench X this morning there was great excitement as a beautiful Mace head was found. I was on the spot to draw it being washed – but didn’t have my recorder switched on to catch the sounds of the excitement.

At the other end of the scale I had to wait all day for a large pot to be lifted. I made several drawings of the pot fragments in situ being meticulously excavated – but the surrounds needed to be cleared and the whole area photographed before it could be lifted.

Later this afternoon, after another pause while the pot was drawn in plan, they began delicately transferring the pieces to trays with acid free tissue in them. Then rapid drawing was needed to catch the moment. 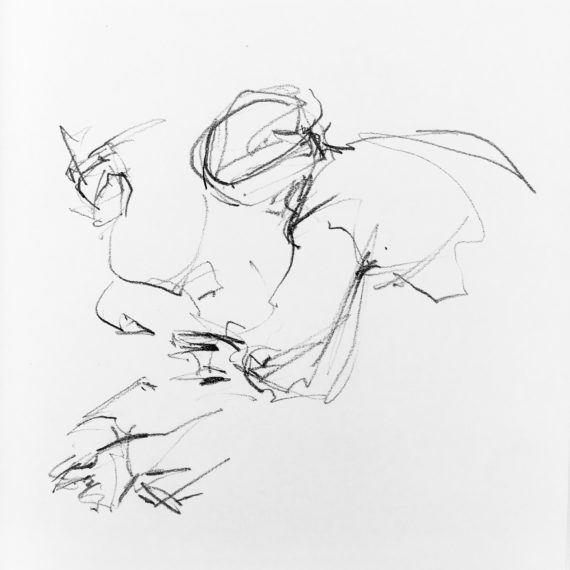 In another structure they have recently discovered a deep hole, which is reckoned to be a drain. However, there are a number of necessary processes to be carried out in the surrounding area before it can be investigated further. So I must be patient and keep watch in order not to miss the action.  Watch this space…