Yesterday I was mainly embracing the unexpected in archaeology and the potentially chaotic in my art practice.

Many of the structures on the Ness of Brodgar site are built over earlier buildings. So when excavating the structure nearest the surface, earlier ones suddenly appear. On either side of this drawing are the two early structures that have emerged within the main excavation. 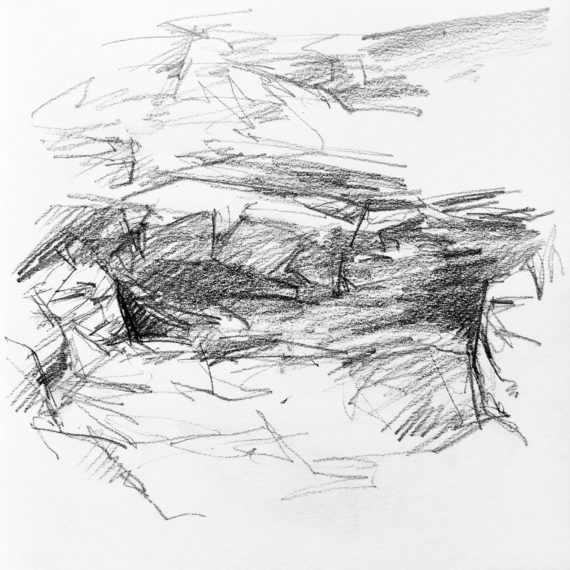 There are also unusual features that appear within a structure where least expected – like a small orthostat (upright stone) running parallel in front of a big one. 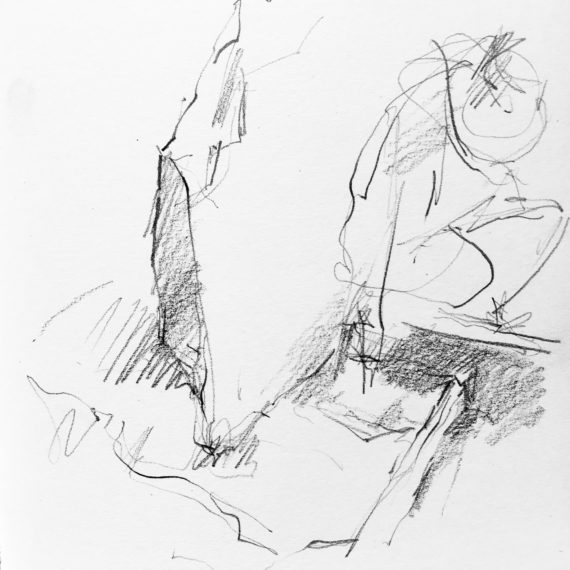 Added to this, lovely pieces of decoration are found, like the cup-marking made by ‘pecking’ in a stone beside an entrance. These cup-markings and cupules occur on many sites. (One of the archaeologists showed me a photo of spectacular ones at Kilmartin Glen in Argyle.) No-one can be sure of their meaning or the intentions behind them. The temptation is to call them ‘art’, which is not only questionable but also a modern concept. All one can say is that someone or some people left their mark.

So can I call what I am doing in this residency ‘art’?  I am documenting activity on the Ness dig through a collection of drawings, plein air painted sketches, and sound recordings. The film I make using this material is aimed at evoking a sense of being on site and my experience within it.  This is all bound up in my curiosity to research the world around me – as a way of coming to terms with its, and my, existence. But it could easily be described as journalism without a camera, rather than art…

No visitors but rain this morning prevented drawing. To use my time, I tried to work on the narrative structure for the film – but found it impossible in a small space of the Art Hut on an iPad. The only way to get to grips with the muddle of images and sounds is in a big room with large sheets, or a roll, of paper, cutout mini prints of the images and a lot of postit notes. So not a productive morning. 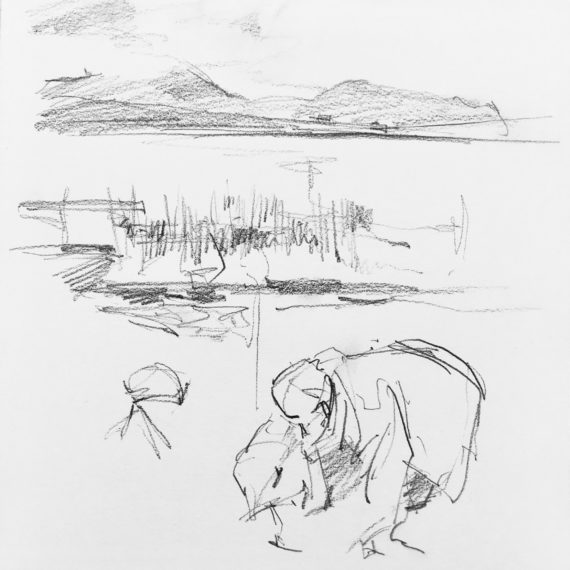 This afternoon the rain eased enough for a drawing and a watercolour, with the clouds rolling in across the loch. 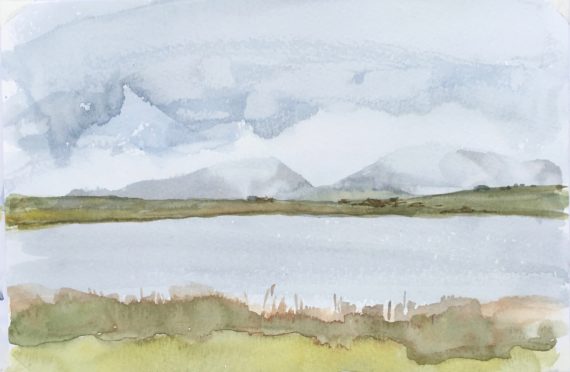 At the end of the day’s work on site, I drew the archaeologists putting their kit into the barn.

On Open Day there are so many visitors to the Art Hut that there is little chance of getting on site for more than a hasty sketch. 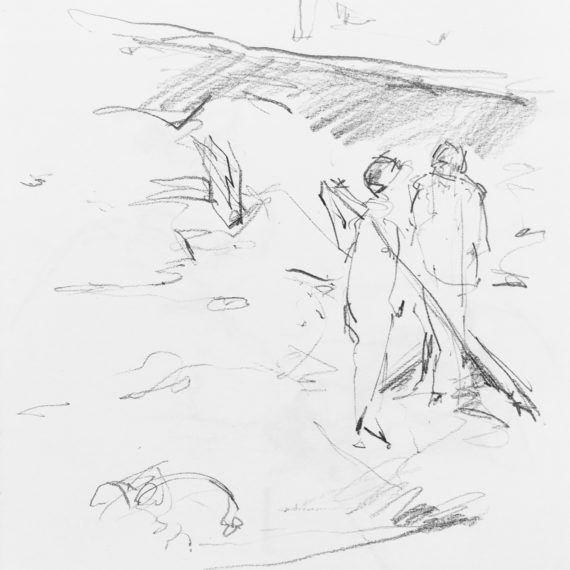 However late in the afternoon, when a shower had thinned out the visitors, it was possible to go out and witness the end of an experimental firing of a replica Neolithic pot, using sheep dung as the fuel. 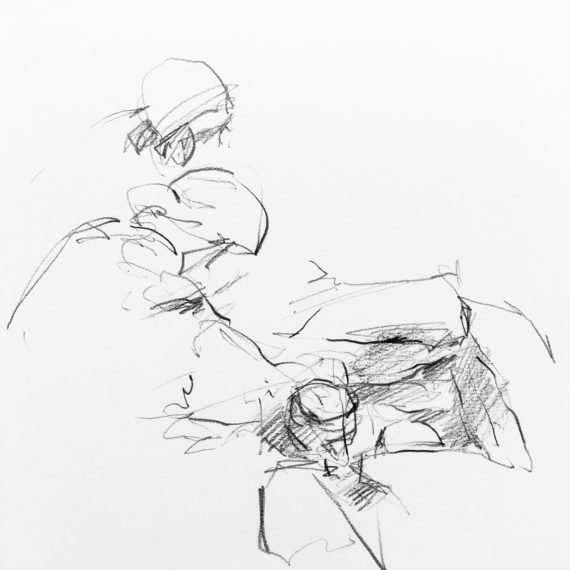 More thinking than artwork today – at least to start with. I’ve been trying to get to grips with the rhythm of the dig and my place in it. Having tried various scenarios for various people – management, supervisors, students, and myself – I have come to the conclusion that we all are in a similar position.  We begin with intentions, then the unexpected happens – and then, as one of the supervisors succinctly expressed it, it’s like trying to turn a tanker around and finding we can’t stop it.

So having got that into perspective, I got out to do some drawings. First the excitement of a very long orthostat (standing stone) being revealed. 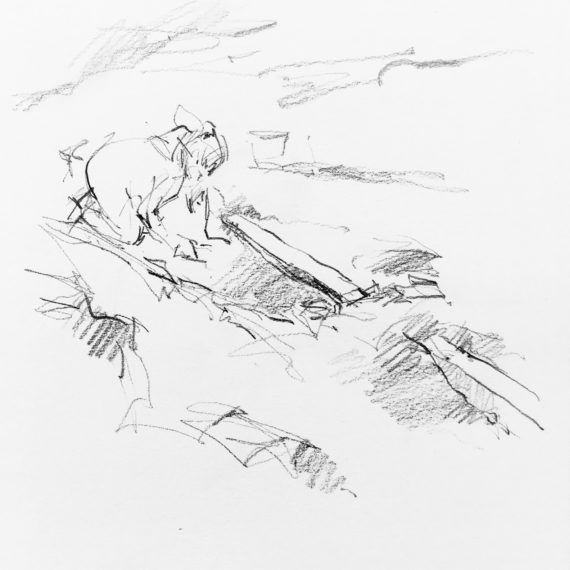 Then an approaching rain storm. 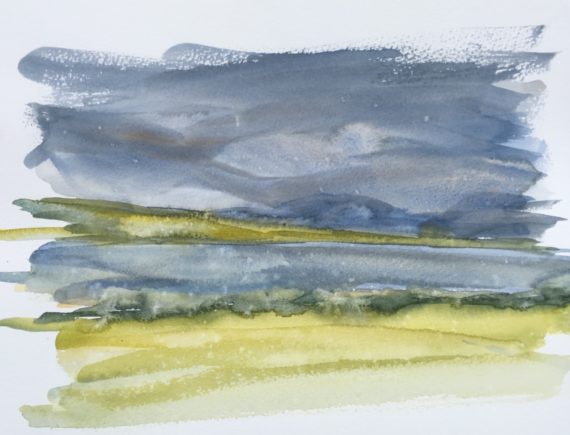 A stone being examined for decoration.

And finally the Director’s dog in pensive mood. 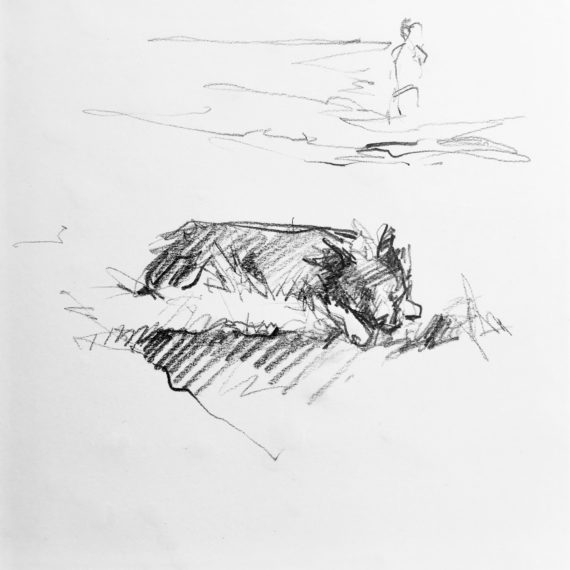 No blog tomorrow as we have a day off in lieu of the Open day on Sunday.

A busy morning starting early making a series of rapid sketches of the start of the archaeological day collecting kit from the store.

Tea break provided a chance for a pair of studies.

Just before lunch there was the excitement of a very large slab being lifted to reveal – nothing. Further rapid, very sketchy drawings, which I hope will be compiled later into something more comprehensible.

In the afternoon it rained… I hope for more considered drawing and thinking tomorrow.