Some days I start out with particular intentions and one by one they fall by the wayside. My first aim this morning was to draw the start of the archaeological day, but although I made a great effort to arrive early, it had already started.

So instead of drawing lots of people getting kit from the Barn where it is stored, I managed a few fleeting figures and had to make do with a study of the location, to act as a background for future drawing. 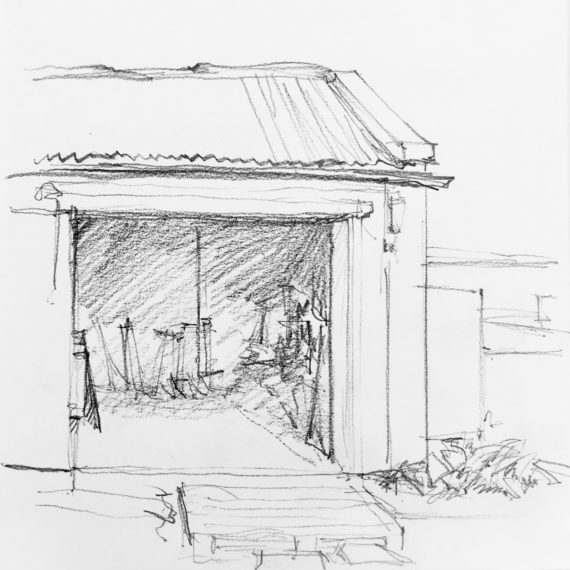 The second aim was to take advantage of the good weather to do a painting – but I got distracted. There was a large group of students learning the art of scraping with trowels, which I wanted to draw for the film.

This was followed by a visit to Structure 26 to see some interesting features not usually found on this site – a quern (the stone used for grinding grain) in situ beside the hearth. 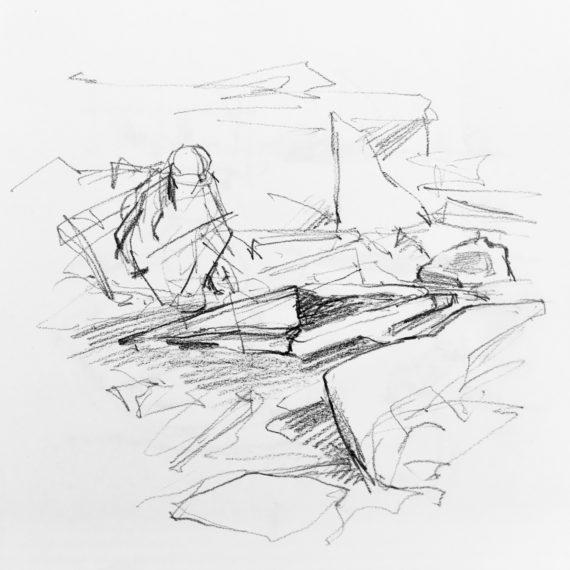 Back in the Art Hut for teabreak there was an influx of visitors, some of whom had already been buying my postcards in the shop. By this time the weather had changed. The sun had gone in, it was cloudy with shifting light – and it was really too late to start a painting…

This ongoing residency requires a long view. The film I’m composing is not a final outcome. It’s a good way of collating my findings but I need to think beyond its development to wherever the project takes me. So while I continue to collect material to fill the gaps in the film’s narrative, it is necessary to remain open to other threads in my artist’s research – whatever that may be…

There is also a persistent ‘problem’ of making a better drawing or sound recording that covers an aspect already in my film.  So I must not be precious and will have to allow earlier material to end up on the cutting room floor if necessary.

Today’s drawings focussed on mattocking and shovelling top soil in the extension to Trench X. This is an aspect already covered in my film but today’s sound recordings, if not the drawings are better than the ones already in the film. 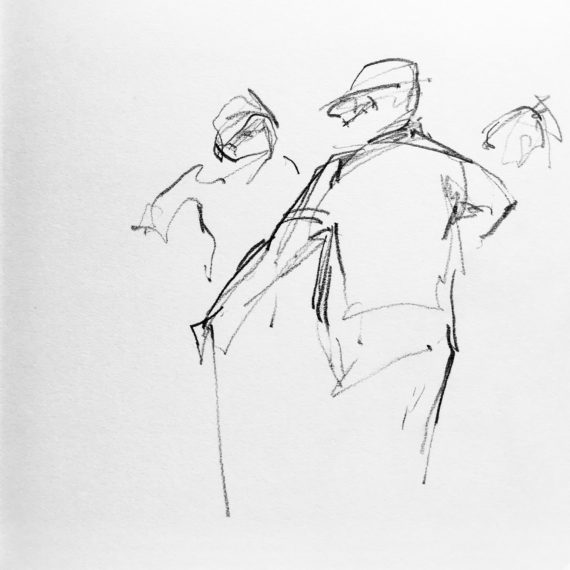 There is a new edit in progress but last year’s version is available on Vimeo. It is also worth following the progress of the archaeology in their daily Dig Diary at www.nessofbrodgar.co.uk

I’m beginning to realise that my collection of material is extremely wide ranging and somewhat chaotic. The film that I’m making, by layering artwork and sound, will need a narrative.  Time to get working on a story board. There are two ways of looking at the ‘story’ and I hope to combine them. One is the nuts and bolts of the day to day process of archaeology, and the other involves my reflections on the nature of archaeology and the ‘why’ of the processes. On top of that is my continued investigation into the use of perceptual drawing in another discipline. A structure is needed to ensure it is not just a muddle.

It is possible for drawing to have added value over the very sophisticated technology used in archaeology. When I bear witness through a physical medium like drawing, all my senses are alive to the situation – temperature, wind, sounds, smells. The sound recordings add voices, birds, traffic and weather. I think and write best sitting outside beside the trenches.  The Art Hut is an relatively isolated pod away from the action of the dig.

So back to today’s drawings: 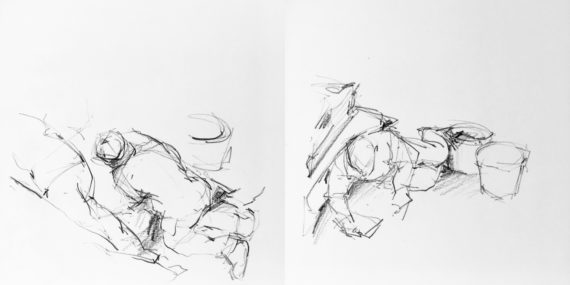 Reflecting on the physical effort that must have been involved in building the structures at the Ness, I decided to look for the same effort in the people digging – always on their knees in the mud. 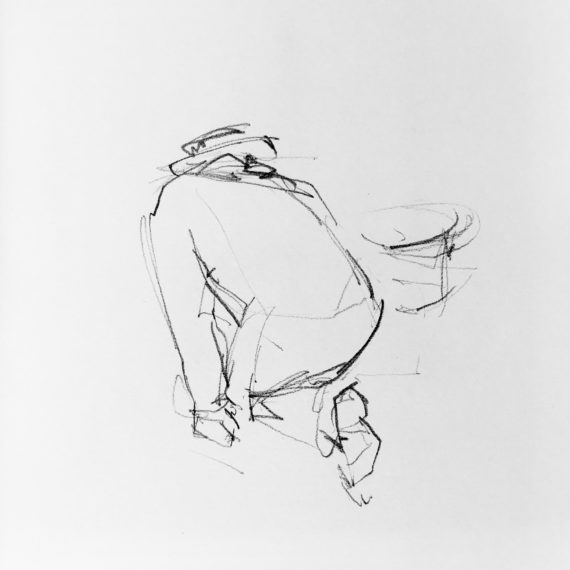 An enlightening conversation this morning with one of the supervisors, who explained how their meticulous documentation is necessary to preserve information about the excavation – in what is essentially a destructive process. This prompted a drawing of buckets of floor deposits removed for analysis. 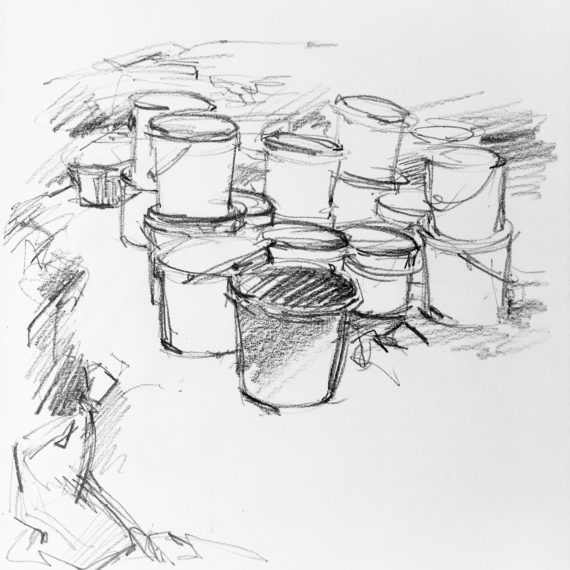 At the end of the day I did a drawing to celebrate the end of Trench Y, which has revealed only a few artefacts and absolutely failed to find ‘the wall’. Its greatest achievement has therefore been an absence. 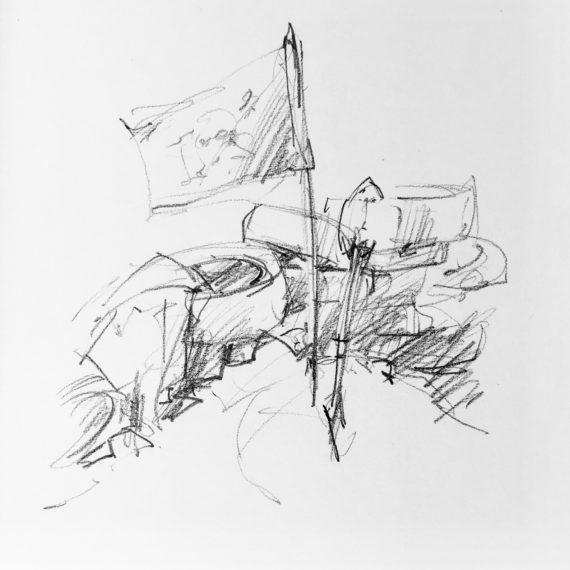 Next week the ‘pirates’ move on to Trench X…

A day of beginnings and near endings. Most of the volunteers were starting on extensions to Trenches T and X. The spoil heap for T is now mountainous. I recorded detailed sounds of mattocks, shovels and wheelbarrows to go with some distinctly sketchy drawings of spoil heap activity. 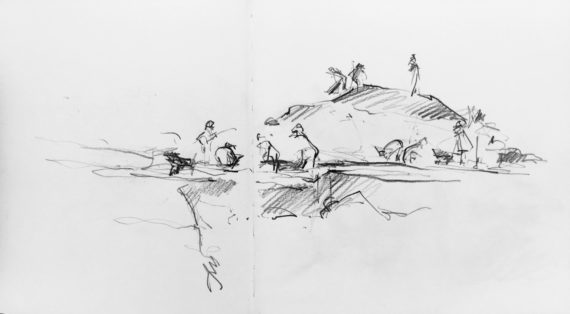 In Trench X they were lifting turf for an extension to pursue some wooden post holes. There is no guarantee they will find them, like the non existent wall sought in Trench Y. 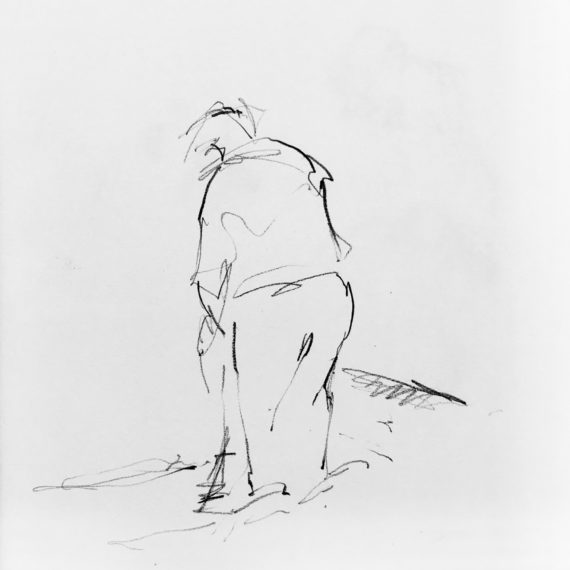 It is the last couple of days in Trench Y so photographs are being taken. Ranging Poles are used to show the scale, to ensure as much scientific evidence as possible – in a discipline that is ultimately interpretive.

Archaeology has a fluidity through the absence of absolute concrete evidence. There are always hints but no certainty. For some archaeologists it is the persistent ‘why’ that compels them to continue.  There is a parallel for me in drawing, where I try to ‘touch’ the physical world in a effort to understand it, but always find it beyond my grasp.

Damp, not actually raining at the moment, but mild and humid. Flies are a nuisance. Apparently the biting midge season is later on – but I’m not going to take any chances and cover myself in midge repellant. Not much wind so a good day for sound recording.

I may not have a plan but I do have a method of sorts. First, a wander round the site to see what grabs my attention. Second, revisit positions I have identified as stories to follow. Third, keep an eye out for opportunities to fill in gaps in my collection and chances to strengthen existing threads.  It still relies on happenstance – but that’s what maintains the fascination.

In the first category today, there’s a potential pathway emerging between two structures – a place where art is often found. Drawing 1 identifies the position (to be revisited as category two) and drawing 2 is of figures either side and beyond the ‘doorway’.

The weather improved, albeit with some really moody skies. Dry enough for watercolour in the third category. 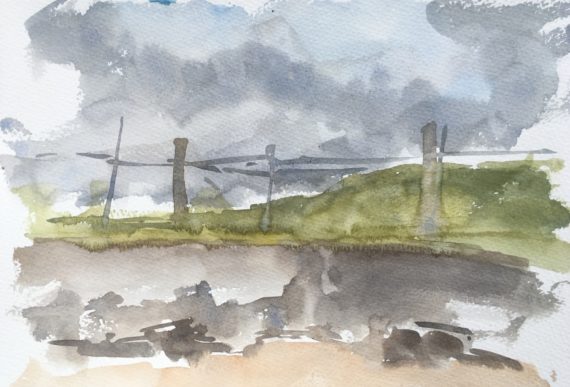 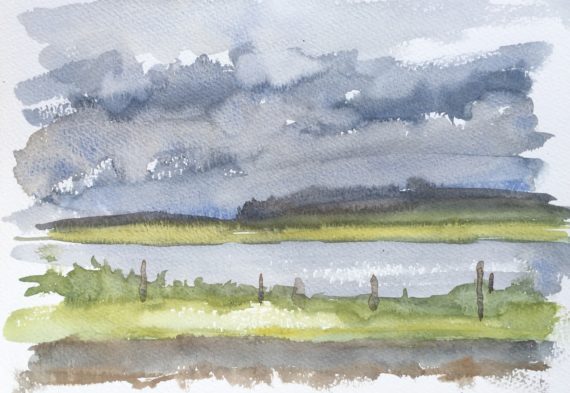 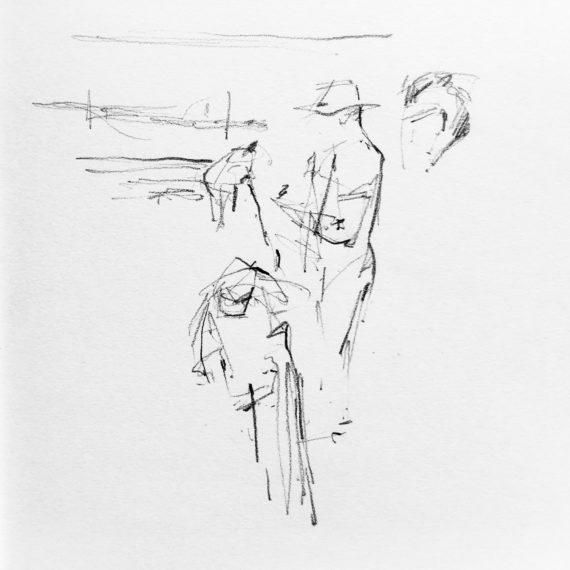