This may be the last week of excavation in Trench Y.  I therefore need to complete collecting material on it. 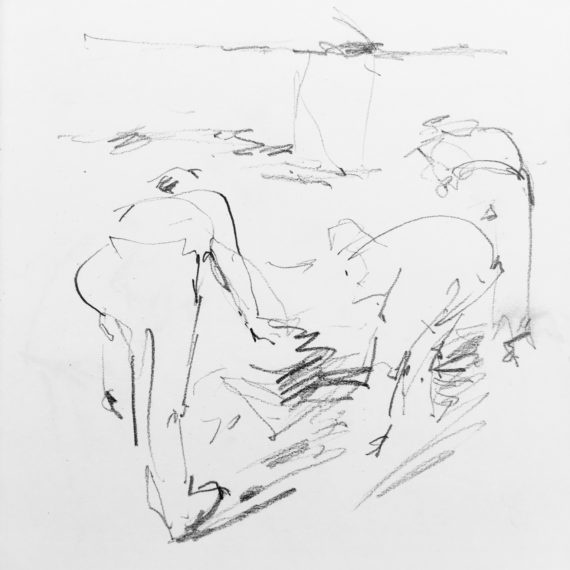 This morning they were clearing away earth and rubble to get to the ‘natural’ earth, using shovels and mattocks – and passing comments on how much earth they move compared to other trenches.  I settled into a corner, just out of range of the flying earth and did a watercolour to use as background for the drawing. 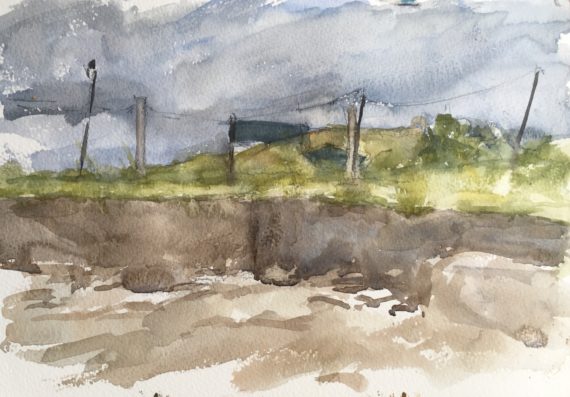 It’s a bit overworked so I thought I’d do another more spontaneous version – but as I left the Art Hut the rain started.  While I enjoy the accidental interference of rain on watercolour, that was not my choice today.  Maybe tomorrow…

The sun came out and shone all day. It was even hot enough to shed some of my many layers of clothing. Spirits were high on site and the dig got going in earnest. I spent the day at Trench T, established the spot where I have begun to make a series of drawings – and today the first oil painting of the season. 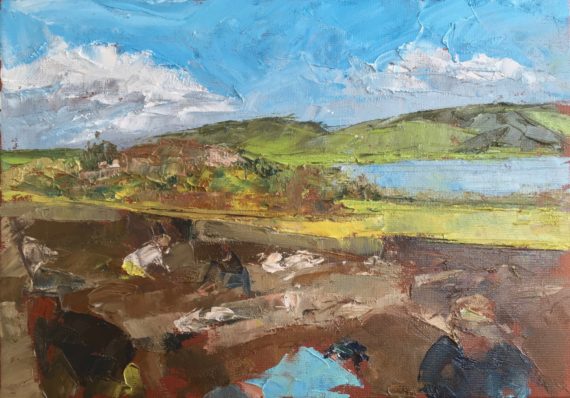 Plus a couple of drawings from the same position. 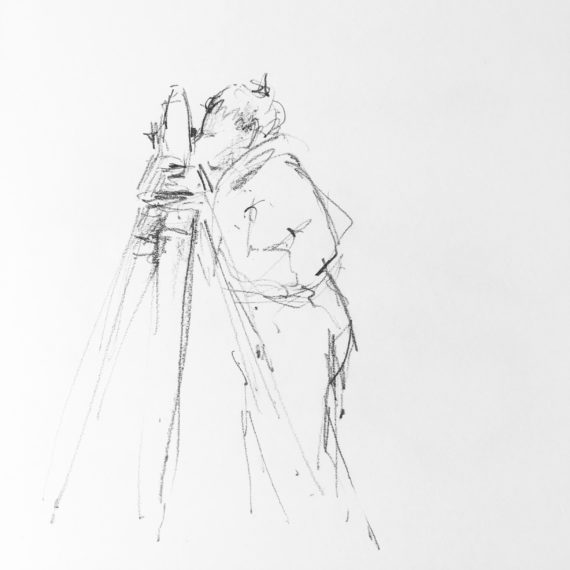 One of the Total Station in action and another of diggers at the top of the trench. 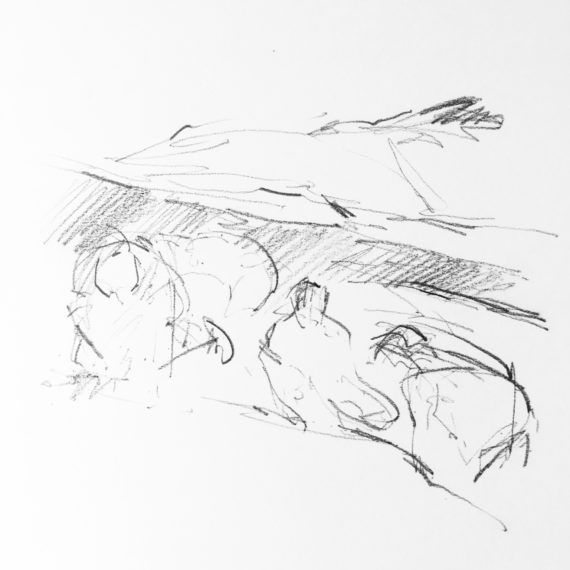 Yesterday bad weather suspended the dig.  Today I am sitting in the Art Hut waiting for the rain to stop. Even if I could stand the wind, the paper in my sketchbook will suffer in the rain. There is a blanket of grey cloud – not even the usual drama of an Orkney sky.

Time to reflect on what I may do this season – all eight weeks of it. Last year they asked if I have a plan. This year most of them know me well enough to simply enquire how things are going and what I may do.  There are certain objectives, like filling in some gaps in my collection of material for my ongoing film. Otherwise it is a matter of following the activity on site to see what it throws up.  I also intend to do more serious reflection, partly through reading but mostly through continuing the process of composing the film – layering the drawings, colours and sounds.

My role on site is a little clearer now, made easier by the archaeologists’ appreciation that their process contains passion and the need to accept uncertainty in what is designated a science. 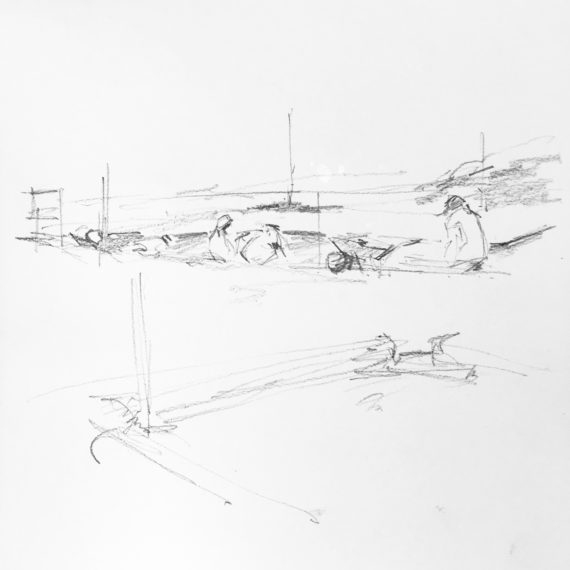 I managed a drawing from the door of the Art Hut of dogged archaeologists working the rain.  Not having such staying power, I gave up and left for the day. The forecast next week promises sunshine – let’s hope…

Rain and wind – enough to make most people want to stay indoors. Not at the Ness of Brodgar though, where both archaeologists and visitors are out in this weather to do and see the dig. Visitors are here briefly before heading back to the dry and the warm. But archaeologists remain working for hours, scraping mud or, as today is the first day with the tarpaulins off the trenches, weeding and trimming back the grass that has grown over the year. 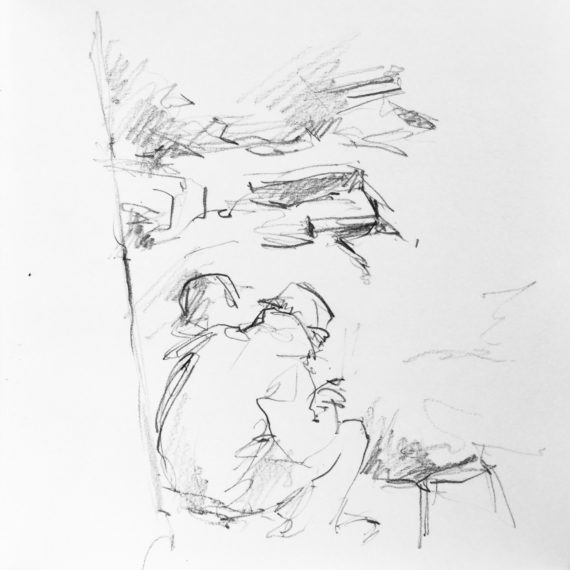 Work has begun again in Trench Y. There is yellow clay of the natural surface around various hints of bits of structure. It’s going to be interesting to see what is revealed in the next few weeks.

The weather is a little friendlier this morning and uncovering the site continues. This is an aspect I have already drawn and recorded. So I was looking forward to moving into the Art Hut and getting organised in my space for the dig – but the firm bringing the portacabins are not expected to deliver until this afternoon.  However, a treat was in store. The director gave a talk to some Art and Archeology students, which included a fascinating insight into Trench T.

There are several trenches and many structures within those trenches, each with its own interesting story and dedicated archaeologists who are willing to share their experiences for my project. At the moment I am concentrating on two very different trenches.  One is Trench Y, which was meant to be opened and closed in one season, but has had a stay of execution to allow for some further work this season. It will be one of the faster excavations on site. The other is Trench T, which has been excavated over several years, slowly revealing some amazing archaeology. The director’s talk has provided an excellent background to Trench T’s story so far and provided a glimpse of what may be discovered this year. Last year I established a view point from where I can follow developments and will be able to layer the drawings to ‘animate’ the progress. Both fast and slow trenches generate excitement and sometimes frustration as they both throw up unexpected results, that bewilder and delight. It is this emotional response that is the focus of my work here.

The Art Hut has arrived and I’ve moved in at last. It is an ‘Anti Vandal Unit’… 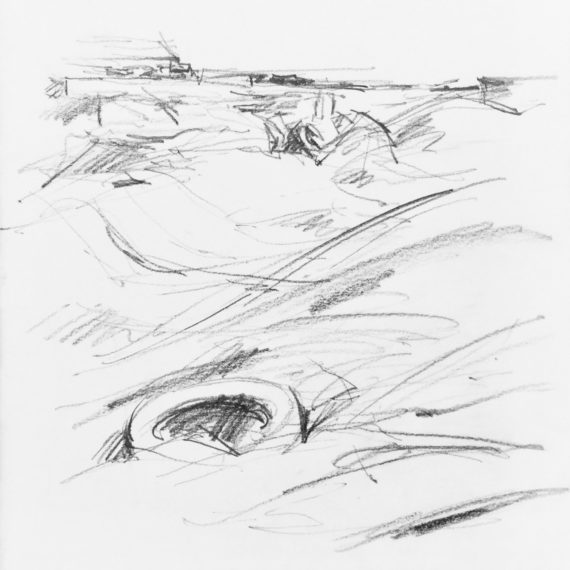 The wind has picked up again.  I just managed to get a drawing of tarpaulins billowing, and a decent sound recording of them too, before the rain arrived and it was time to go home.