This year’s residency is for the whole eight weeks of the dig. I am now thoroughly integrated into the workforce as an artist, and the archaeologists know what I’m trying to achieve. My aim for this season is to continue recording human involvement, specifically the emotional responses to the archaeology. I will also continue to work on my film, looking to fill in any gaps in the ‘story’.

Alongside the practical work, I intend to reflect on how my drawings are making a valid contribution to the archaeological record – and the implications for perceptual artworks in other fields of research.

Back to the hard reality of working in Orkney.  It was a wet and windy start. So today they are only removing the tyres from the trenches – working in long lines to roll them to the stacks. It is too windy to lift the tarpaulins, which will have to wait until tomorrow. 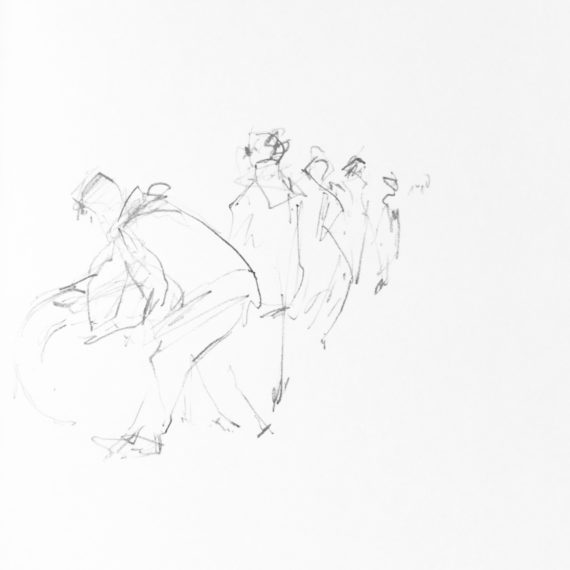 There is a lot of water to be bailed out. 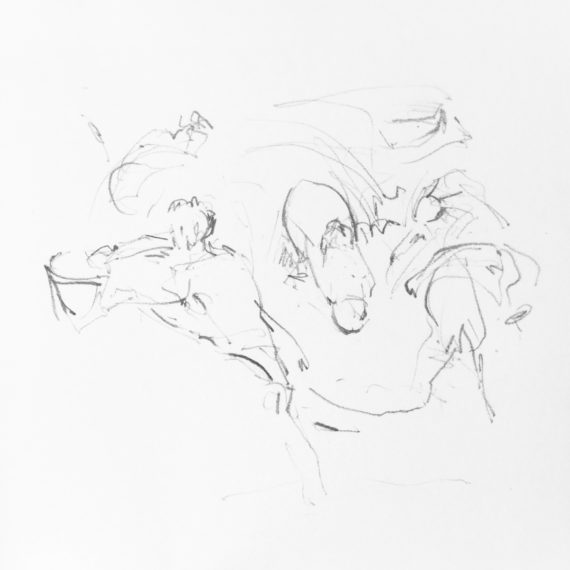 The weather forecast for tomorrow is a little better – and, with any luck the Art Hut portacabin will arrive too.

The last day of this year’s dig and there were very few people left on site. Everyone is tired as they wind down from a rather intense season. My adrenaline is seeping away and it’s difficult to think clearly or articulate how I feel. So here are the pictures I made today of the empty trenches. 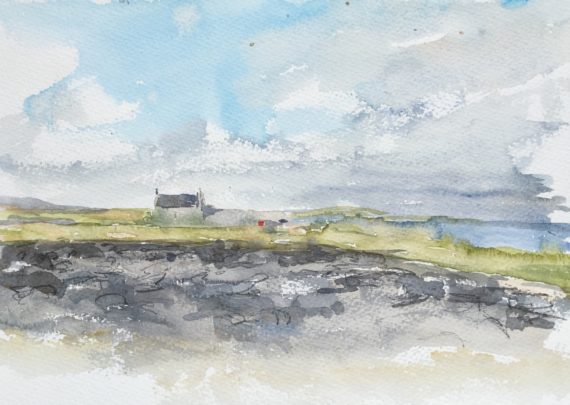 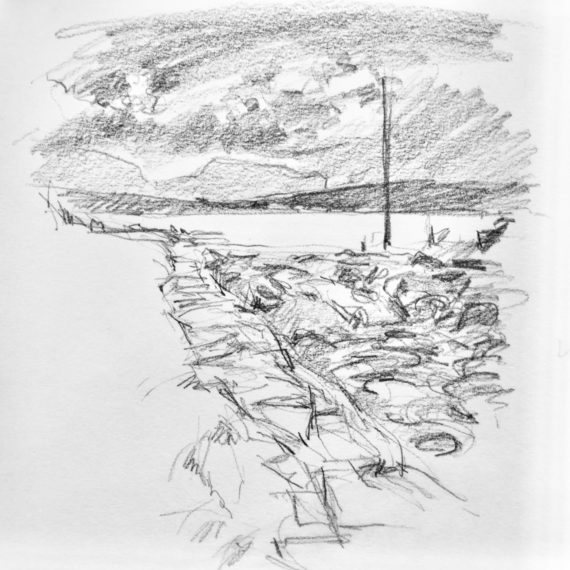 And my experiment in colours on a stone, which will be left out over winter to see how they weather. 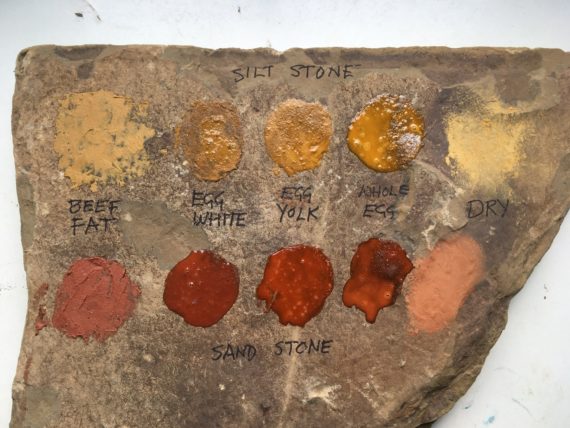 I will now be heading back to my studio for a period of reflection and recovery. So there will be a pause in my blog, which will be continued when there is fresh action in this project.

Until then news of my other activities can be found at www.karenwallis.co.uk

Today saw all the trenches covered over with tarpaulins held down with tyres, to protect them until next season’s dig. It felt quite sad to see everything that has been revealed this year being hidden. 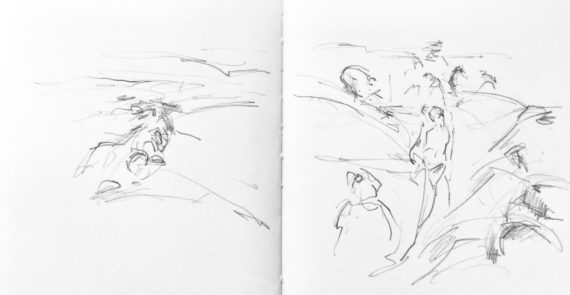 But it has been an amazing eight weeks. Paul, supervisor in Trench J, was full of enthusiasm for how things have progressed in their understanding of the structures, for what his team have achieved and the artefacts they have found. 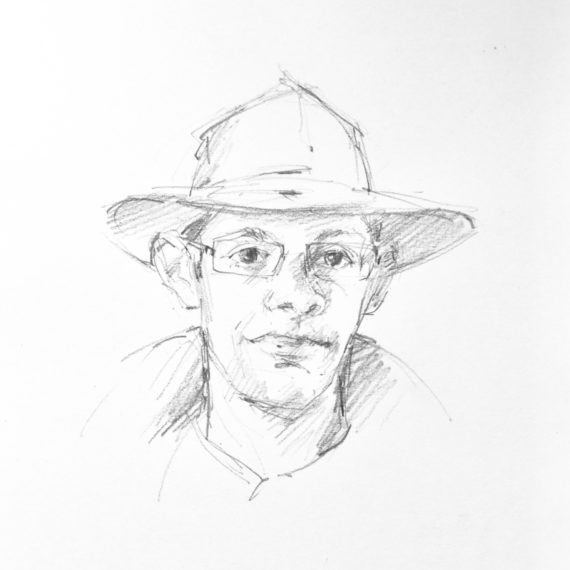 Personally I too have progressed in my understanding, not only of the site but also in how my involvement can contribute to the archaeology. By becoming increasingly integrated into the workforce, my use of drawing and sound to record the everyday process of the dig is now revealing the emotions that process generates. In a science based discipline, the documentation of excitement is not usually part of the archive. 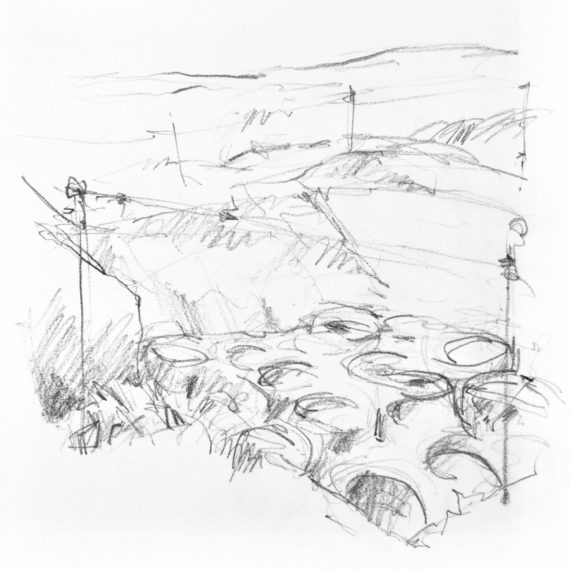 In the case of Trench Y, the dominating emotions were a mixture of frustration and determination. The wall they sought does not exist. I watched as they dug further and further towards the loch edge, finding nothing but rubble. Nevertheless they have found sufficiently interesting evidence of archaeology at the top of the trench to prevent the trench from being filled in completely. So while the bottom has been back filled, the top has been covered over with the tarpaulin and tyres, ready for further investigation next year. 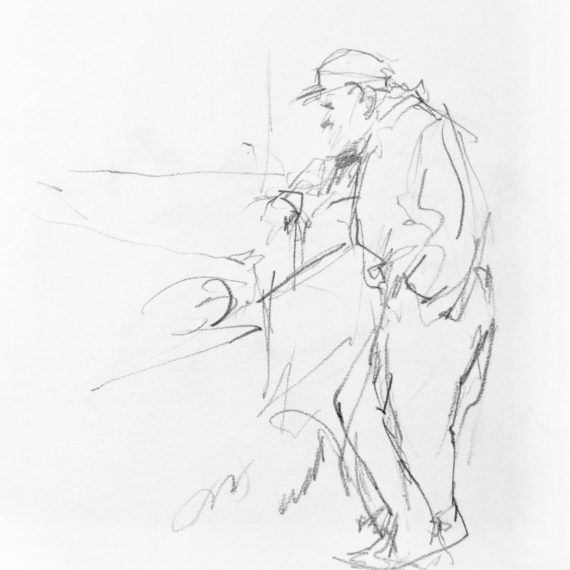 And I am not the only onlooker to be pleased by this stay of execution. John, a regular visitor to the site has also been following the fortunes of Trench Y.

Activity in the Art Hut is drawing to a close – so today we wrote a review of our season ‘From the Art Hut’ for the Ness of Brodgar web site at www.nessofbrodgar.co.uk

Today was the last day that the site was open to the public. But while the last tours for visitors went round, the archaeologists were starting some serious covering up of the trenches. 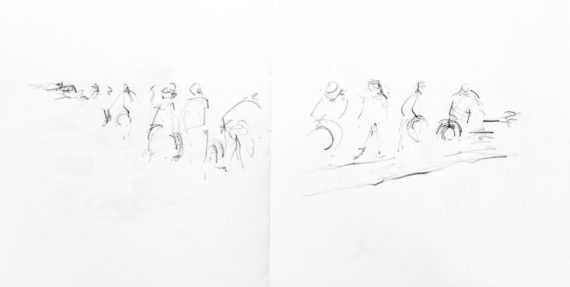 Then tyres were rolled into position.

Finally tarpaulins were spread, and the tyres laid on top.

We hope there won’t be too much rain or high winds tomorrow, while the rest of the trenches are covered.

A very different atmosphere this week all round. The weather is autumnal, i.e. cold and windy with occasional horizontal rain. Visitors are keen to engage with the Art Hut – maybe to shelter from the weather.

In the trenches it’s a mixture of an urgency to squeeze in a last bit of excavation, and the start of closing down individual structures. Some of these were piles of rubble at the start of the digging season but are now distinct buildings that require proper protection for the winter, using sandbags. 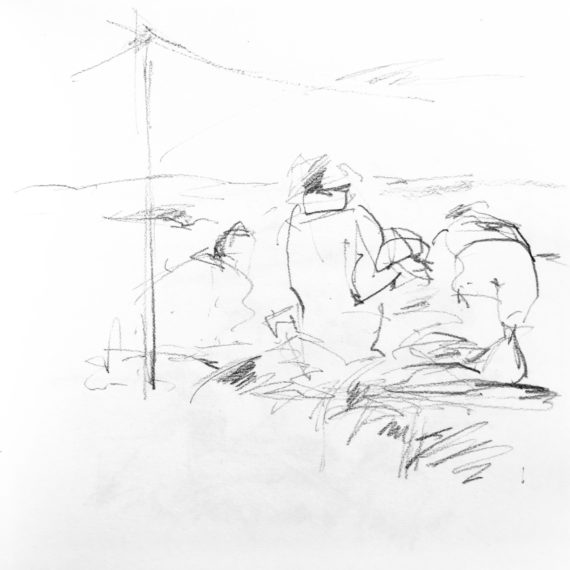 Due to the increase in demand for sandbags they are making up more from the spoil heaps – and running out of actual bags. 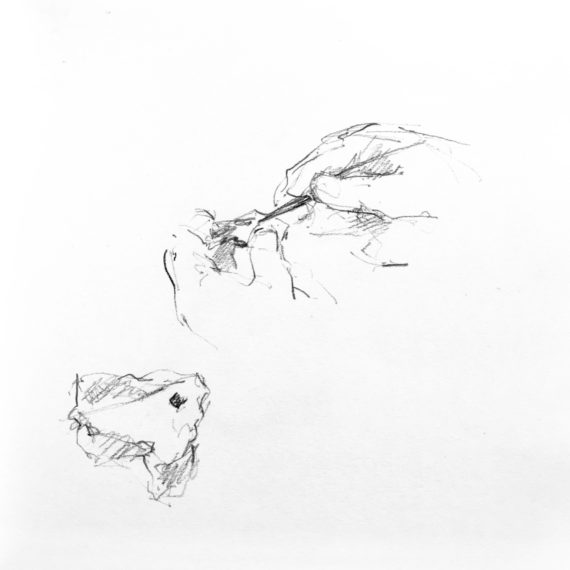 Worsening weather meant I took shelter indoors, where pottery is being cleaned for further inspection. 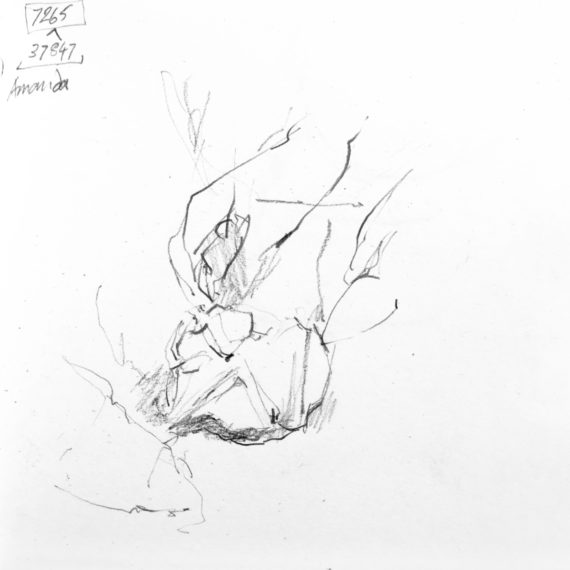 But there are times when wind and rain must be ignored – when a beautiful bit of pot is being excavated late in the afternoon.