I’ve been shopping.
Not Christmas shopping though.
I wasn’t part of the crowd that rushed to pick up the free vegetable peeler in Debenhams. I wasn’t part of the argument and vehicle denting that was going on during a dispute for a parking space in Birmingham city centre. I certainly wasn’t the target for the six burly gentlemen in festive knitwear sprinting towards a shoplifter in the Bull Ring….

I went shopping with Dan.
I met him in Fair Deal Music. I got there first. It was like entering a foreign land. Everyone spoke a different language to me. There were items on shelves and I had no idea what they were for. Maybe like a sex shop in a foreign land…

But they were great. I talked about what I wanted to do, talked about the project. They were patient, I didn’t feel patronised, I felt like a prospective convert. Things were explained that needed to be, glossed over if not “you can deal with that later…” Jamie Clayton was just lovely! I’ll be back…

My MacBook was greeted with a big wide smile. Thank goodness… PCs just don’t cut it I’m told.
(This I already knew)

My purchases were plugged in and demonstrated. This was great, because like many of you reading this I’m sure, reading instructions is not an option. I need to see, need to hear rather than read words. Words float about, they don’t attach themselves to anything, until I have made sense of things with my eyes and my own fingers.

I’m going to play over the weekend. I’m going to plug it all in and have a go. There is a temptation to panic and leave it all in the boxes and just let Dan do it. That really these things belong to him, not me. But it was my money, I need to get to grips, to get a grip. The whole project is about getting to grips… Pull on my crampons and grapple up the learning curve!

I’ve got: a microphone, a shock mount and pop shield, a mic stand, and an interface to go between the mic and my MacBook… with assorted cables. 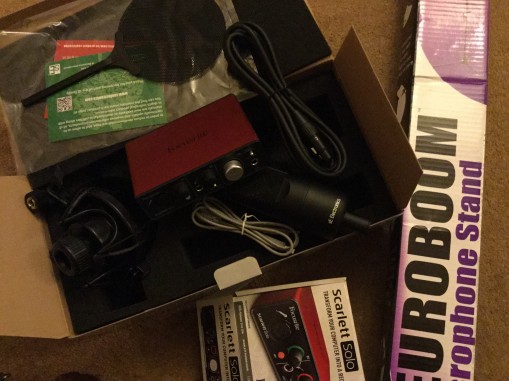 My first microphone. The object of desire as written about for The Museum for Object Research a few weeks ago.