You sit in a room with the same people for hours. You record stuff, sometimes repetitively. You drink tea and eat biscuits. Then you sit and listen to what you’ve recorded. Sometimes you listen to the same bit over and over. Then you record it again. Then you listen again.

Chris Cleverley came in to record guitar and banjo for the song “Numb”, and worked up the most beautiful vocals – he has a great voice. He had an idea for some harmonies, so we recorded those, then another bit: three part harmonies over a chorus…. Oh it sounded so sweet…. It’s playful, this process, if it is allowed to be, if there’s breathing space for people to try things out. That was part of the remit, The Agreement between Dan and I, that there should be time to play, and to allow the session musicians coming in to be part of the creativity. If you don’t allow that, you might as well do it all digitally. Where’s the joy in that? Experienced musicians come up with stuff I couldn’t imagine in a thousand recording sessions… little moments of magic that lift a whole song. One chord change can rip your heart out.

Then I put the kettle on, go to the loo, walk about a bit and listen some more. Eat some crisps.

But then when we’d had the cup of tea, we listened and decided, wonderful though they are, they are unnecessary. As Chris said, this is a tragic song. My vocal is intimate, real… Not always where it should be… There is fragility, vulnerability…. This woman’s song doesn’t require the extras. This woman’s tragedy isn’t a big production. It is lonely and sad. 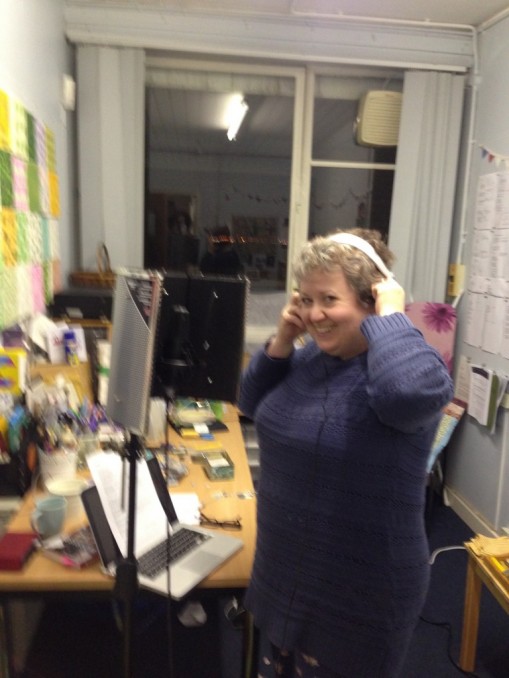 So we stripped them back out again. When we play it in the car, we can do the harmonies ourselves… But for the recording, less is most definitely more.

And yet this morning, I’m wavering again… Maybe just my voice, just a little on the chorus? It really did sound good, but, as Chris wisely questioned “Does it service the song?”

So we have another one in the bag. Thats two totally finished, one finished other than a violin, and this one that is finished, but I might just record some harmony vocals just to make sure.

(Dan had captured me saying “yep” and pressed play whenever he required an answer. Small things become hysterical after five hours… maybe that’s where the fun is too, in the bits in between?)

and of course, Dan is found at: www.dan-whitehouse.com