The danger with a funded project is that you spend such a long time making sure you have the books balanced, promoting, marketing, networking and managing, that it becomes difficult to fit in doing the actual art!

This week, I’m keeping the fun in funding!

So today I’m back in the studio, all eight well-travelled bras have returned home. They are currently having a nap to get over the jet lag. I watch over them carefully, occasionally picking one up to examine its wiring. Some of them I think need extra wires so they hold a better shape. One lot actually needs removing and redoing because it is holding a very peculiar shape indeed. As I handle them (after over a month in some cases) I listen to the songs and ponder. This is why I’m doing all this. Yes, it’s good to be doing all these activities to increase one’s profile, improve the CV, and perhaps attract a little attention, but actually, if you take all that away, I’ll still be stitching. And I’ll still be singing. These thoughts that prompted this work haven’t gone away. But it is important to keep reminding myself. 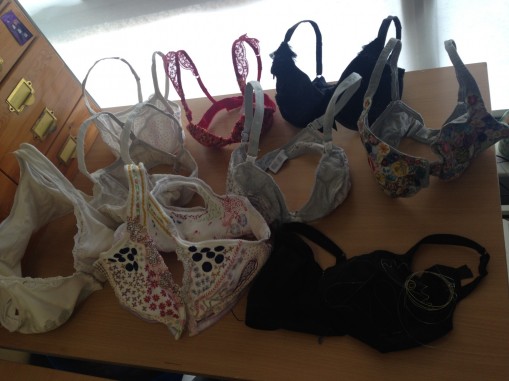 Two artists are in my head: Louise Bourgeois, still, and those works she was compelled to make… exquisitely stitched and formed… made from her life…

And Grayson Perry, after watching his programme on Channel 4 this week (Grayson Perry’s Dream House) Julie’s house: “A monument to thwarted female intelligence”. My bras could all belong to a Julie. Every woman, one woman. The “nine” is becoming increasingly nominal as the project trundles on.

I’d like to talk to Grayson about his affinity with the “general public”…women particularly… especially those outside the art community. He’s great to watch. He has real conversations, intelligence, insight. He asks deep and meaningful questions but with the lightest touch. He shows genuine interest, is never patronising. I feel we could have a chat about bras and women and stories and such. If I was that way inclined, I might start stalking him, in case the opportunity for an exchange of views presents itself. I expect I’d say something fatuous like “uhu hu hu… hello Grayson, I like your dress!” He would be riveted by my sparkling wit and we would be best friends forever!

Back to the stitching…

The latest bra (no 9) is a black one… not too worn, but I wanted this one to be black, so I chose it over the more worn specimens… I’m attempting to stitch used guitar strings to it, but am more likely to succeed in twanging my eyes out in the process. Vicious bastards! 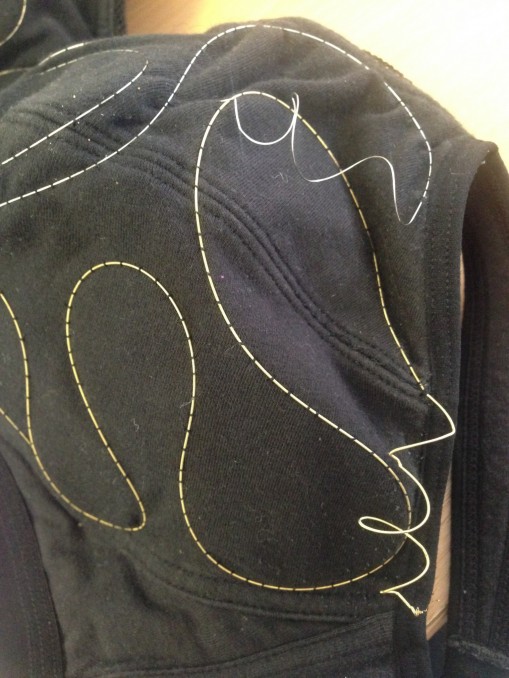 By the time I’m finished, no one will be able to get a tune out of them, but they have become close to my heart as we’ve gone along, so there they are. They have become a little bit of my story. The uselessness of the strings once detached from the guitar, a symbol of my inability to play anything but the most rudimentary percussion. A link from the songs to the garments. A monument to thwarted female musicality?

This week I have released another song upon the world…

“Reputation”
Lyrics, Music and all vocals by Elena Thomas
Produced by Dan Whitehouse